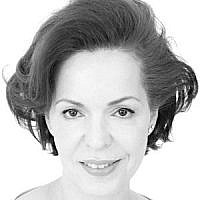 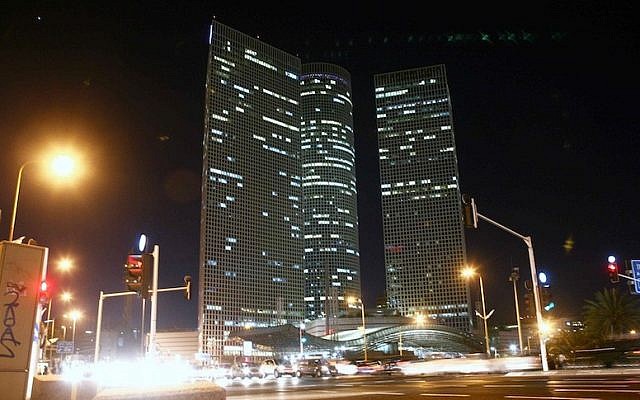 As we conclude the contested law’s first phase, its widespread impact is felt on the Israeli market

Known from ancient times as a land of milk and honey, nowadays the nation of Israel is also a nation of opportunity. The law commonly referred to in Israel as the “Concentration Law,” requires investors deemed to be overly concentrated in the Israeli market to sell or take other actions regarding prime assets. By the same token, these investors may also be restricted from acquiring further Israeli assets. While some existing players in the Israeli market (mostly Israelis) may be harmed by the law, it has created significant opportunity for new players.

In the four years since the law was enacted, we have witnessed a considerable number of transactions driven by its requirements.

The law set up a few milestones, the first is December 10, 2017, by which Israeli conglomerates having multiple layers of publicly-traded subsidiaries (legally existing structures, also known as “pyramids”) must be flattened to a maximum of three layers of public companies; by way of sale, going private, redemption of public debt, merger, etc.

The last conglomerate to comply with this requirement was the IDB Group. On November 22, 2017, just days before the deadline, IDB Development sold its controlling interests (71%) of Discount Investments to a private company held by Eduardo Elsztain, who is also the controlling shareholder of the IDB Group. Accordingly, Discount Investments remained a publicly-traded company, but became a sister company of IDB Development, instead of its subsidiary – removing one public layer at the pyramid’s top.

Those who closely follow the Israeli financial media surely know there’s nothing like IDB to kindle populist debate and criticism of politicians and journalists alike. This deal was no exception. Many argued that the deal’s structure and financing breached the Concentration Law’s letter and spirit, and some even called for legislation of deal-blocking regulations. I have a different take on this situation. A thorough analysis of the Concentration Law (formally, The Law for Promotion of Competition and Reduction of Concentration of 2013), together with its explanatory notes, leads me to conclude that the deal breaches neither the law nor its spirit. The specifics of the analysis deviate from the scope of this piece, but in a nutshell, the provisions relating to pyramid-flattening cover only the number of public layers and they do not restrict transactions within a conglomerate that meet this number of layers criterion. Unlike the other components of the law described below, neither separation of assets held nor concentration considerations apply. Moreover, any legislation restricting the manner of doing business should be interpreted narrowly and should not apply retroactively.

The Concentration Law has already significantly succeeded in reducing the number of layers in many Israeli public-companies’ pyramids. According to a study conducted by the Israel Securities Authority, as of September 2017, only 13 companies kept the third to fifth layers of pyramids, compared to 67 such companies upon commencement of the preparatory process of the Concentration Law’s legislation in 2010. The IDB Group, a perceived catalysator of the law, had seven such companies in September 2017, compared to 27 in 2010. The recent IDB deal reduced a layer at the top of the pyramid, turning four “third-layer companies” into “second-layer companies,” no longer restricted by the Concentration Law. Thereafter, IDB still has three companies in the pyramid’s third layer.

The second milestone under the law is only two years away. By December 10, 2019, pyramid structures should be further flattened to no more than two layers of public companies. By that deadline, another component of the Concentration Law also becomes effective. It relates to separation of cross-holdings of mega Israeli financial companies (generally, companies managing assets exceeding NIS 40 billion; US $11.4 billion) and mega Israeli “real” (namely, non-financial) companies (generally, companies having revenue or debt in Israel exceeding NIS 6 billion; US $1.7 billion). 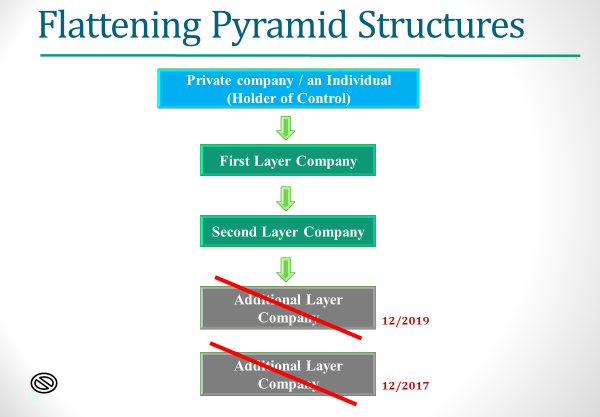 Two years may seem like a long time, but it is not. Considering the market conditions, the harsh sanctions on a breach (forced sale by a trustee) and the precedents in recent years, especially in the regulated insurance space, selling such assets could take a long time – and no seller wants to resort to a forced sale at the last moment. Much like a game of musical-chairs, no one wants to remain standing when the music stops.

Indeed, we are already seeing many transactions and separation actions in the market. The Delek Group (concentrating on gas, oil and real estate) has attempted to sell its Phoenix Insurance Company several times, as did the IDB Group with its Clal Insurance Company. Alas, the potential buyers did not stand up to the regulator’s standards. Apax Partners sold Tnuva Dairies in a well-orchestrated deal in 2015, ahead of the curve. In another case, Bino Group, the controlling party of both The First International Bank of Israel and Paz Oil Company, was bound by the Concentration Law to choose between these two prime assets, and opted to decrease its holdings in the latter company.

In parallel, seeds of the third component of the Concentration Law are starting to bud. Under that component, overall-market concentration and sectoral competitiveness considerations must be taken into account when government rights or assets, such as telecommunication licenses or exploration concessions, are allocated. A pioneering example was the restriction of The Israel Corporation from entering the emerging field of oil-shale exploration.

The Concentration Law is unprecedented both in its widespread effect over the Israeli economy and in the aggressive remedies it applies to increase competition in the allegedly-concentrated market. The law does not include “grandfather clauses” exempting existing structures and holdings, resulting in Israeli investors being forced to sell or take other actions regarding prime assets within a limited time. All the while, these Israeli investors may also be prohibited from acquiring further Israeli assets, consequently shifting investments and debt out of Israel.

The good news is these restrictions on current players in the Israeli market create opportunities for new players. From the perspective of non-Israeli investors, the Concentration Law constitutes a regulatory springboard, giving them an advantage over existing concentrated players. Opportunity is certainly ripe for newcomers to the Israeli market.

*The writer is a Senior Partner and Head of the Mergers and Acquisitions, Securities and International Transactions Department at the law firm of Ron Gazit, Rotenberg & Co.