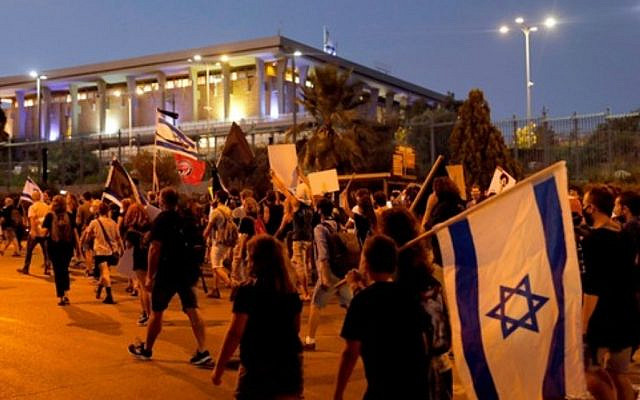 Only a few months ago, a new euphoria arose when finally, after three elections, Blue and White leader Benny Gantz and incumbent PM Benjamin Netanyahu put aside their differences and agreed to form a new government. Yes the agreement involved changing the country’s basic laws, of dubious constitutionality, to allow the rotation to take effect. Nevertheless, a feeling that finally Israel had a stable government to contend with, put all problems aside.

Except, no stable government came. The Coronavirus crisis drags on and on, a second wave is now worse than the first wave. Over two thousand new infections a day, dozens new seriously ill and hospitals filling up. No major lockdown in site. The government was rather busy fighting the merits of a tax cut to Netanyahu, and fighting about the statistics of infections in pools and beaches and gyms. There is now a train of thought saying that lockdown is in fact NOT effective despite a ballooning infection rate. This puts us on par with the United States and Brazil, the two worst countries in the world when it comes to a ballooning infection rate.

Suddenly, the nostalgic days when Bibi alone ran the show with top bureaucrats and showed the world how efficiently he put the country under lockdown, bringing the numbers down to mere double digits, is a point of pride. The new government is making political paralysis a sport while 20% of Israel’s able hands cannot find a job. Ever more troubling protests erupt nightly in Tel Aviv and Jerusalem, most leading to some violence. Most importantly however, most Israelis in one form or another live in a state of utter confusion with a government meant to lead them.

Example: Malls and stores to be closed on weekends, yet zoos and museums to remain open. Gyms are to remain open, yet the cabinet wants them to remain closed. These sort of confusing regulations are commonplace.

No this is not about the protester that took her top off on top of the menorah near the Knesset. Yes, she committed a callous act; however, the government’s failure to come to the aid of the suffering Israeli populace is as disgraceful. A relatively unheard of MK, Yifat Sasha Biton of Likud, arose to the occasion to annul all the cabinet’s coronavirus decrees in the name of the public interest, just to have it overturned in legislation the next week. This happens as the number of inflections rose passed Minister of Health Yuli Edelstein’s red line of infections needed for a lockdown. So we can all go enjoy the beach, visit a pub, and crowd into buses as our neighbors become sick. We must allow the degradation because there is no research that lockdowns are effective, even if such research was effective in many other countries. We must protect our businesses but fine them to death, so they will close not because of Coronavirus but due to overenforcement. The list of inconsistencies grows on and on.

All this together sounds like Alice in Wonderland, the 2020 version, where nothing makes sense and guidelines are put into force with much ambiguity. Arguing and following the cheshire cat into some policy endgoal that even the politicians dont know is the real quagmire. A recipe for decline and upcoming catastrophe.

Like what the protesters on the street are demanding, change is needed. Benjamin Netanyahu should be given the credit he deserves but should now retire and focus on his legal difficulties. Benny Gantz has proved to be incompetent and good at stirring trouble, he also is not a unifying figure. A new politician, perhaps from the ranks of Likud should rise forward, break off and form a new party, and with the Right Wing, Religious parties, and Zionist mainstream create a block that will sweep new elections.

Yes new elections. Perhaps the only way to solve the current stalemate is to have another round but with the right candidates.

In the mean time, we may be forced to take matters into our own hands regarding Coronavirus as guidelines change weekly and sometimes daily. The government has failed to watch our back and instead of debating how many genies can fit in the bottle, should put together real measures to stem the epidemic.

Bibi showed he could manage a lockdown once before, am sure it can be done again. However, with a new Coronavirus Czar against lockdowns, it may be a summer closer to Alice in Wonderland than a real government policy.

Change is needed, but we may all be much sicker by the time the change arrives.