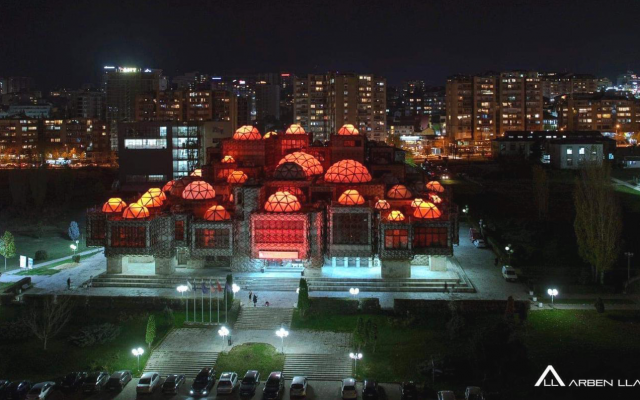 Kosovo, by photographer Arben Llapashtica. Used with permission from the Kosovo Ministry of Foreign Affairs.

February 1, 2021, marks the signing of formal diplomatic relations between Israel and Kosovo, taking place on zoom, because of the cancellation of the gathering in Israel due to the coronavirus pandemic.

Israeli Foreign Minister Gabi Ashkenazi and Kosovo’s Foreign Minister Meliza Haradinaj signed the documents from their respective foreign ministries. The four documents were prepared in English, Hebrew, Albanian, and Serbian. They were scanned and exchanged, signed and ratified, in an unprecedented legal procedure on the zoom platform. A plaque, symbolizing Kosovo’s future embassy in Jerusalem, was unveiled.

At the ceremony, Ashkenazi spoke of the establishment of relations between Israel and Kosovo as an important and exciting historic step; an alliance between peoples and cultures; reflecting the many changes the region has experienced in recent months. “Today, Kosovo has officially joined the circle of countries striving for peace and stability, and has recognized Israel and its capital, Jerusalem.”

According to Kosovo’s Foreign Minister Haradinaj, Israel and Kosovo, “hold the same values of democracy and freedom that will be the foundation for our dynamic partnership, committed to promoting peace and good relations with all countries of the world.”

The Charge d-Affairs of Kosovo to Israel, Ines Demiri, spoke to this writer about the areas where both countries will look to express their unique partnership. “One of the main priorities of Kosovo is the economy. We are looking forward to close cooperation on different economic projects in fields such as health, medicine, agriculture, education, culture, and tourism. There is great potential for people-to-people connections and interactions. The economy is the first one and the main one that Kosovo and Israel intend to deepen in their cooperation.”

Demiri mentioned Israel as being a Start-Up Nation which has drawn countries from around the world. “We see Kosovo as a new Start-Up Nation. It has big potential. We have a very talented young generation here under the age of 35; a young population. They are all well-educated. They are eager to share their ideas and expertise; show their innovations; and learn from Israel, as well. Innovation and technology (IT) will be one of the main topics of cooperation.”

An area of great importance to the State of Israel was mentioned by both Demiri and Ambassador Dan Oryan, Director of the Balkans Department at the Israel Ministry of Foreign Affairs. Kosovo has agreed to help the families of Jewish victims from Kosovo during WWII. There will be restitution of Jewish properties that were confiscated by the Nazis; also the cleaning and restoring of Jewish cemeteries.

Included in the plans of the Kosovo government will be the building of a Jewish cultural center and synagogue in the historic city of Prizren. Demiri mentioned the possibility of even developing the first Jewish kosher wine of Kosovo!

Kosovo has also adopted the IHRA working definition on anti-Semitism. A few years ago, Kosovo sent a delegation of their leading professors to Yad Vashem to learn how to teach Holocaust education to Kosovo’s children. The professors have a big interest in working on this issue, including implementing the history of the Holocaust into Kosovo’s textbooks.

The formal signing of agreements between Israel and Kosovo on zoom February 1st, includes Kosovo’s recognition of Israel and its agreement to establish an embassy in Jerusalem. This is unprecedented, in that it is the first European country with a Moslem-majority to do so. At the end of the fourth quarter of this year, the physical ceremony of opening the Kosovo embassy in Jerusalem is scheduled to take place.

These emerging diplomatic relations follow a White House ceremony on September 24, 2020, when then U.S. President Donald Trump presented the Washington Agreement. It was a deal that encouraged closer financial cooperation between Kosovo and Serbia — two countries who have had their differences. To sweeten the deal, Trump offered America’s economic assistance, including opening up an office in Belgrade.  At that time, Serbian President Aleksandar Vucic and Kosovo’s Prime Minister Avdullah Hoti were challenged to engage in normal economic ties between their countries.

Part of that Trump deal was also closer diplomatic and economic interactions with Israel. The Israeli Foreign Ministry hopes that Pristina and Belgrade will continue to operate in peace, while working against extremist groups engaged in radical Islamic terrorist activities… like Hezbollah. Both the political and military organizations of Hezbollah have now been banned by Kosovo and Serbia.

The Israeli government considers the Washington Agreement to be a great achievement for the U.S. Administration. Ashkenazi commented on this at the February 1st ceremony where U.S. Deputy Assistant Secretary, Matthew Palmer; U.S. Ambassador to Kosovo, Phillip S. Kosnett; and American Chargé d’Affaires at the U.S. Embassy in Jerusalem, Jonathan Shrier, were in attendance on zoom.  U.S. President Joseph Biden, already friendly with Kosovo, is expected to continue America’s diplomatic relations with the country.

Ashkenazi welcomes America’s contribution to Israel’s new ties with Kosovo, as well as the process of normalization with Israel’s Middle East neighbors through the Abraham Accords. He sees these as paradigm changing events. “It reflects the change in the region in the Arab world, and the Muslim world relationship with Israel.”

He emphasized that Israel wants the Balkans to be stable, and that the agreement signed in Washington was between Israel’s two friends, Serbia and Kosovo. At the Washington ceremony, Serbia agreed to move its embassy from Tel Aviv to Jerusalem. According to the Trump deal, the embassy move must take place by July 1, 2021.

The Serbian delay has mostly been due to Coved-19, but it is also because the formal diplomatic relations between Israel and Kosovo have not been without controversy.

This writer spoke with Alexander Nikolic, Honorary Consul of the Republic of Serbia to Israel. He is both Serbian and Israeli. The February 1st zoom ceremony was disappointing for him. According to Nikolic, “From a legal political point of view, Serbia considers Kosovo, in its constitution, to be its southern province. Serbia’s understanding today is that Kosovo’s unilateral decision of succession is not a result of mutually agreed upon terms.”

Nikolic says that Serbia believes the international community should respect its sovereignty and territorial integrity related to Kosovo. “The Serbs were always open to negotiations; open talks without preconditions; very much emphasizing their willingness to compromise.” Nikolic has come to the conclusion that Kosovo is not interested in compromising about borders or any geographical integrity for Serbia.

According to Ambassador Oryan, Israel acknowledges Serbia’s pain and disappointment. “That is why for almost 13 years, Israel did not recognize Kosovo, and good ties with Serbia are one of our major interests. There is no question that it was controversial for Israel to enter into ties with Kosovo.”

Israel recognizes the sensitivities with Serbia and hopes the two countries will remain close. The level of cooperation with Serbia is very high. For its part, Serbia has adopted the IHRA definition on anti-Semitism, and has been dedicated to Holocaust education including scheduling events to honor Holocaust Survivors on International Holocaust Day. Serbia has also sent its teachers to Yad Vashem to educate them about what happened in WWII, and to promote Holocaust education in Serbian schools. Serbia is one of the leading countries in Europe passing legislation and reimbursing its Jewish Community with payments on Jewish restitution of property.

According to Oryan, “Israel has a lot of respect for Serbia, and we have warm and strong relations. We hope that our recently established relations with Kosovo will add to the stability of the region, and will contribute to the Balkans, in general. And, we appreciate the American mediation leading up to these important agreements that were just ratified. Countries that have not spoken to Israel before have close ties to Israel now. Kosovo is a continuation of this new reality.”

In the past, Serbia influenced 18 countries to withdraw their support for Kosovo’s independence. As part of the Washington Agreement, for one year, Serbia will not attempt to influence any more countries to withdraw. Likewise, Kosovo will not enter into international forums for one year (like UNESCO), nor attempt to encourage agreements with such organizations that would further recognize Kosovo’s independence.

The Israeli Foreign Ministry expects both countries will work together and deepen economic ties. The Washington Agreement promoted this kind of cooperation. Nikolic, too, suggests that people on both sides are interested in trade, economic and financial ties that will include direct flights between Belgrade and Pristina once the coronavirus pandemic has lifted. The countries expect to finish the highway connecting Kosovo with central Europe, through Serbia. On practical terms, Nikolic believes, “The income can benefit everyone. People are tired of having a problematic social economic situation.”

Furthermore, Belgrade and Pristina are expected to join the European Union. Therefore, Brussels could assist in promoting better ties between the two countries.

Oryan spoke of new business partnerships involving both Kosovo and Serbia. There has been increased interest in the last few months by Israeli businessmen to invest. One of the Israeli companies that is doing well is called Enlight, which has great potential in both countries. It stands at the forefront of the green energy revolution. Its projects involve the generation of electricity from renewable energy sources. It has built several wind farms, and is one of the biggest cooperative efforts in the past year that is benefiting both Kosovo and Serbia. Oryan hopes there will be further awareness of new Israeli innovation that draws greater curiosity from businessman in the Balkans region. 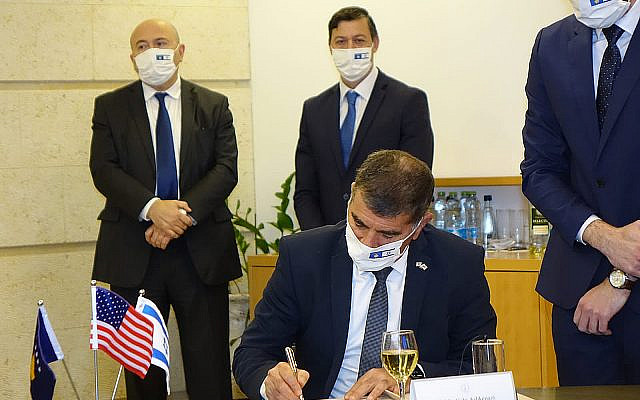 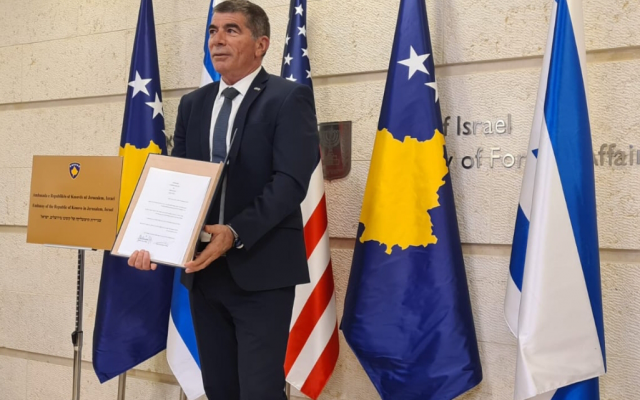 Israeli Foreign Minister Gabi Ashkenazi shows the signed documents with Kosovo on zoom. He is standing next to the plaque that was given by Israel to Kosovo to display at their future embassy in Jerusalem.Used with permission from the Israeli MFA.
About the Author
Carrie Hart is a news analyst reporting on political, diplomatic, military and social issues as they relate to Israel, the Middle East, and the international community.
Related Topics
Related Posts
Comments