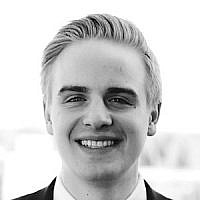 The Blogs
Alexander W. Titus
Apply for a Blog
Advertisement
Please note that the posts on The Blogs are contributed by third parties. The opinions, facts and any media content in them are presented solely by the authors, and neither The Times of Israel nor its partners assume any responsibility for them. Please contact us in case of abuse. In case of abuse,
Report this post.

Donald Trump may have famously coined the term “fake news” during the 2016 US presidential election, but by no means is he the first to fall victim to this scourge. The state of Israel has had to deal with the consequences of fake news for a far greater duration of time. In fact, with the rise of social media, the problem has only been exacerbated. Untruthful information meant to harm the Jewish state has been weaponized on a mass scale by utilizing platforms like Twitter and Facebook.

Heartbreaking pictures of Palestinian “victims,” real or not, reach millions with little to no context. Mainstream media outlets promote articles filled with outright falsehoods that delegitimize the Jewish state and empower its adversaries. Old tactics to correct the record on these lies have failed. Friends of the Jewish state need to employ an updated approach to counter this new spread of malicious information.

Unfortunately, fake news is nothing new to Israel or its advocates. From its founding to this point, the Jewish state has been forced to engage in a full-blown information war to push back against harmful lies. Traditionally, this assault has taken place in newspapers, college classrooms, and in university textbooks.

Take a stroll down nearly any American college campus and you can see the lasting effects of these methods. Israel was found on a war of aggression! Israel has no legal right to the land it currently controls! Stop the Israeli occupation! Putting together a laundry list of misguided grievances would engulf this whole writing.

Fortunately, a handful of educational groups have been working to dispel these myths. Grassroots organizations like AIPAC and Christians United for Israel focus on educating college students, young people, and holding the media accountable. Intellectually focused institutions such as the Tikvah Fund and Philos Project seek to promote the truth in academia, intellectual circles, and among policy crafters.

This education is important and must continue, but old strategies aren’t sufficient in the new information age. Many adults and younger Americans now receive news largely from social media, some of these platforms which didn’t even exist eight years ago. As so, their political viewpoints are being shaped more and more by what they see online.

Consider a recent report from the Pew Research Center that states at least 67% of Americans receive some of their news from social media platforms. Interestingly, it’s not just tweets or Facebook posts that are included in this category, but also traditional media titans like the New York Times who utilize social media platforms to disperse news.

How might this change in news consumption affect the way Americans view the Jewish state? Look no further than Operation Protective Edge for an excellent case study. In 2014, the hashtag #GazaUnderAttack was widely used by Palestinian activists during the conflict, garnering hundreds of thousands of retweets on Twitter.

Users were shocked by what they saw. Images of bloody children, destroyed homes, and piles of dead bodies were just a few of the photos aimed at illustrating a holistic narrative of the conflict. Predictably, but unknown to the viewer, many of these photos were fake. Some of which were from prior Israeli conflicts and others from wars where Israel was not a participant such as Syria and Iraq.

However, it is not just activist foot soldiers but also respected journalists who propagate this sort of fake news. Even the New York Times, the holy grail of journalism, recently ran a piece with egregiously false information to push a narrative favorable to the Palestinian Authority (PA). In the article, the author, Nellie Bowles, cites the so-called “far right conspiracy” that the PA pays families of terrorists who commit acts of violence against Israel and its people.

There go those fanatic pro-Israel right-wingers again, except, oh wait, the PA paying terrorist families is a widely recognized fact.

As Adam Rubenstein points out in The Weekly Standard, the Palestinian Authority provided more than $347 million to terrorist families in 2017. Worse, this slush fund is estimated to dole out a whopping $403 million by the end of 2018. To its credit, the New York Times issued a correction but nevertheless, the previous “fact” had already spread far across the web.

With these problems in mind, changing times call for new measures. An innovative approach is necessary to push back against this growing threat to the Jewish State. To start, advocates must develop more advanced rapid response capabilities to rid of false information and push out corrections.

Specifically, organizations must work to check viral images, videos, and other sorts of media that can easily play into the hands of our adversaries. Better yet, companies like Facebook and Twitter who have pledged to more proactively purge fake content might be willing to lend a hand to our efforts.

Developing more fact-checking capabilities is also a must. Advocates should consider supporting more independent nonprofit investigative journalists whose sole job would be to correct the record and pursue truth. Professional journalists must be held to a high standard and the best way to do this would be outside journalists holding them accountable.

With the growing prominence of social media as a news platform, Israel will face greater challenges than ever before in ensuring an accurate public image. Lies and fake news will spread to larger audiences as Facebook and Twitter continue to gain popularity. But we can effectively push back, and we must. It’s time to be bold. The future of Israel may depend on it.

About the Author
Alexander W. Titus is a Public Interest Fellow based out of Washington, DC.
Related Topics
Related Posts
Comments