True to tradition, many Jews in Israel keep clamouring for far-reaching and potentially dangerous Israeli concessions to a Palestinian Authority that does not seem genuinely amenable to a peaceful end to the conflict, in spite of what is written in new articles published just before the elections dredging up old news implying that Netanyahu alone is the problem. And they, the Palestinian Arabs, are right to keep on hammering away at us; after all, Israel was born an appeaser and there is no reason to think that we have outgrown our “appeaserhood”. Let me explain:

One problem we Jews have is that we want everyone to like us. This clouds the judgement of many of us and is what lies behind Bennett’s “I apologize” video, which I see as making fun of the Jewish tendency to accept blame for whatever goes wrong between us and the Palestinian Arabs. This, of course, fits in well with the tendency of much of the world to blame Israel for ALL the problems in the Middle East, most recently for the rise of ISIL and for the claim that if only Israel would make peace with the “Palestinians”, everything would be quiet on the Middle East front. I also see our pathological need to be liked as underlying our own incomprehensible acceptance and use of certain terms that actually have no basis in fact, such as “The Occupation” and “The Palestinians”, for example.

And even more amazingly, I see this as the reason behind our easy willingness way back in 1947 to accept the partition plan that further divided our small internationally recognized modern State of Israel in two, about half to us and half to the Arabs after Palestine had already been divided into two pieces by the 1920 San Remo Resolution..

Our indigenous homeland had been carefully delineated by the Zionist founders as encompassing some lands east of the Jordan River in part of what is now Jordan (they made no claim to all the Palestinian Mandate lands), and they were surprised by the proposal by which ALL land east of the Jordan was to be excluded from the Jewish homeland. However, the Jordan River was decided upon as the border in negotiations that were confirmed by the League of Nations (see Notes to Article 25) in 1922. Happy for the official recognition of a Jewish homeland,  the Zionists continued to buy land and develop it.

Then, in 1947, with no legal document drawn up to replace the 1920 agreement, the Zionist leadership was asked to accept a second division of the land and half was offered to the Arabs because of Arab horror at the impending vote in the UN to declare the State of Israel. Israel accepted this further division of our indigenous lands in spite of the fact that it excluded historical and cultural sites highly significant to us as Jews. Is our acceptance of this carving up of our national homeland not appeasement? We were afraid, perhaps, that refusing to give up land would have resulted in a failure of the UN vote and what is appeasement if not giving in out of fear of the consequences of being assertive? Looking back, I am not sure that we would actually have failed in the UN vote, given the contemporary context and international opinion of the time. But we gave in. And in giving in, we established ourselves as a nation of appeasers. 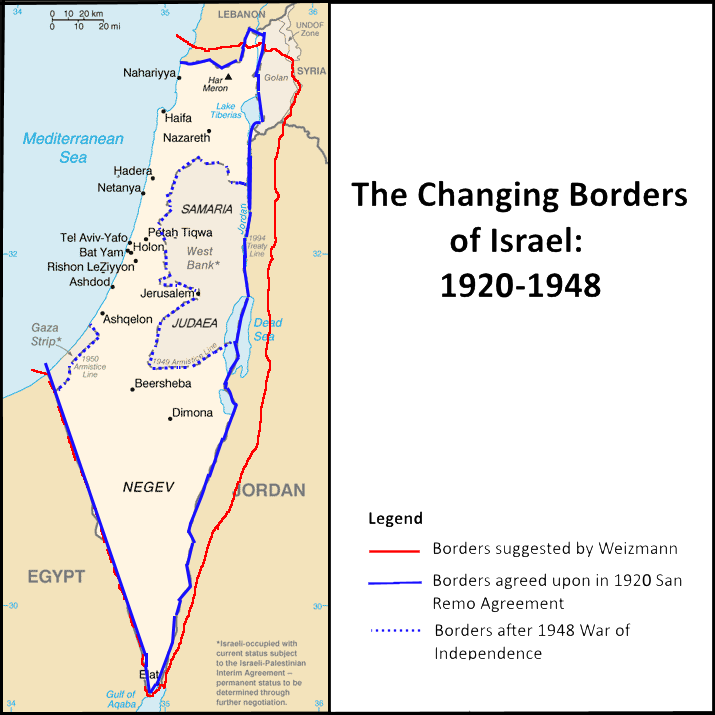 Why? Because we want everyone to leave us alone and let us go about the business of building our country. Israeli appeasers today, including all who use the nonsensical terms, “The Israeli Occupation” and “The Palestinians” (look at the 1920 San Remo Agreement to see who the name, Palestinians, referred to), are hoping that by agreeing to give up land AGAIN, everyone will leave us alone to attend to matters within our borders. But history shows us that that is not going to happen.

Born in appeasement, are we destined to remain appeasers forever? I am not saying anything here in favour or in opposition to any political party platform, nor am I saying what I think the solution is; I am merely stating that we should stand up and assertively address the situation using terminology that reflects history as it really happened and not as certain parts of the global community fantasize happened. We ask the world not to rewrite Holocaust history. I am asking that we not rewrite or allow anyone else to rewrite our national history. We need to tell it as it was.