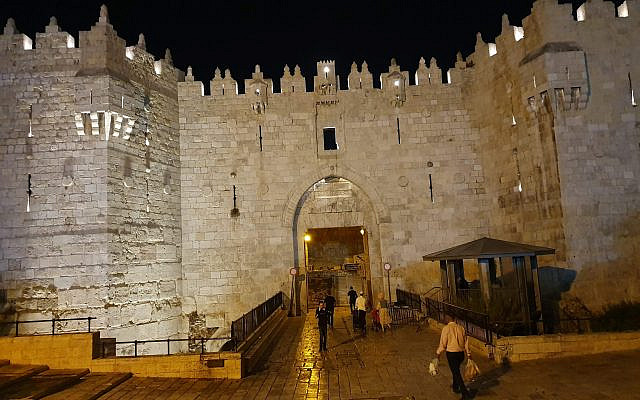 Like many new arrivals to Israel, my first stop upon arriving in Jerusalem direct from Ben Gurion Airport, is a walk to the Old City. Five hundred years ago the Sultan of the Ottoman/Turkish Empire Suleiman had walls built around the ancient holy city which stand today, a well preserved and striking visible reminder of the city’s longevity and history. Fifty-three years ago this week, in the early days of the Six Day War, Israel’s Defense Force entered the Old City via the Lion’s Gate in a successful operation to expel Jordanian forces putting Israel, the Jewish State in control. Actualizing the centrality and attachment to Jerusalem in Jewish life and religious observance over thousands of year’s in exile, this liberation day is celebrated as a national Israeli holiday.

The status of the Old City, the centrality of Jerusalem, the loving preservation of the ancient walls and gates along with the usually bustling and thriving population within and outside these walls, all heighten the impact of the May 30th tragic killing by Israel Border Patrol of a local Arab resident at the Lion’s Gate.

Eyad Al-Hallek who lived with his family, was a 32-year old special needs resident of the east Jerusalem Wadi al-Joz neighborhood adjacent to the Old City. Eyad Al-Hallek, as has been widely reported over the past week, was on his way to his special needs school passing by the Border Patrol security station like he had been doing for the past six years, when for a yet to be determined reason was ordered to stop, but the frightened Al-Hallek began to run away. Soldiers pursued him reportedly shouting “terrorist, terrorist!” chasing the terrified Eyad Al-Hallek down and shooting him. Upon finding him wounded and cowering in a nearby garbage collection area, the unarmed Eyad Al-Hallek was shot to death at point blank range, his cell phone was found still clutched in his hand.

Visitors and people of good will who have paid condolence calls to the devastated Al-Hallek family over the past week have documented their story of the horrifying police treatment just after the killing. The police invaded the family home in a fruitless search for weapons or proof that Eyad was a terrorist. They misled Eyad’s father into believing his son was merely wounded and reportedly used racist and demeaning epithets to family members during their intimidating search.

Several surveillance cameras cover this area of the Old City, but Israeli border patrol and police authorities have confiscated the images and refused to release them to the public as their investigation continues. Thus the main difference between the American George Floyd killing by Minneapolis police officers and the Jerusalem killing of Eyad Al-Hallek, no one was there with a cell phone to record and release the video on social media.

Despite the current lack of dramatic images, some members of the Israeli public are deeply wounded and troubled by the terrible event. Racial profiling, excessive force, police brutality and lack of humanity are all on stark display. The moral corrosion at the center of fifty years occupying and governing Arab residents of east Jerusalem, who have no rights to Israeli citizenship, are on stark display. The question is will the senseless killing of Eyad Al-Hallek be Israel’s George Floyd moment?