Michael Freund, a correspondent and syndicated columnist for The Jerusalem Post, recently published an article called “Israel’s growing intermarriage problem.” I saw it in a Facebook group while watching Netflix with my Jewish husband at our lovely apartment in Jerusalem, the capital of Israel, the only Jewish state in the world. I made him stop the movie and started this beautiful process of getting sad, a very familiar process for me and my husband, knowing how friendly Israel is to people like me, who left their lives behind to start from scratch in their partners’ country.

Anyway, let’s analyze some parts of this “problematic” article

…all of our energies and efforts should be directed toward finding solutions, because with each day that passes, the situation will only continue to worsen. 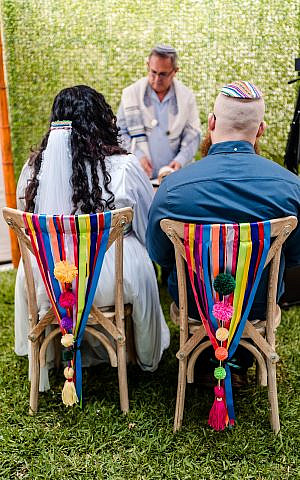 Me and my husband, at our intermarriage wedding.

If a Latin American newspaper, or any non-Jewish newspaper, would have used this quote to describe intermarriage between Latinas, like me, and Jewish men, like my husband, the media would totally be accused of antisemitism, because he would be implying that marrying a Jew is a problem that we don’t want it to get bigger.

Also, by writing articles like this, you just give us more reason to take our lives and families somewhere else. Do you also want to start losing citizens? Because you are doing great. People ask me why I stay in Israel when we could easily build our family somewhere else, easy, this is the safest and best place for my husband to be who he is, a true Israeli Jew.

There are of course numerous factors behind the rise in intermarriages in Israel, ranging from the failure of the educational system to inculcate a stronger sense of Jewish identity, to a conversion system that is overwhelmed, understaffed and underfunded. And there is plenty of blame to go around.

First of all, my husband, like many other Jewish men in intermarriage, have a very strong sense of their Jewish identity, why would we be establishing our family here if that is not the case? Secondly, you cannot ask me to convert, just as I would never ask my husband to convert to Christianity. There is no blame in forming a family, and I am pretty sure God does not judge these unions.

Last month, Dr. Netanel Fisher, head of the School of Public Administration, Governance and Law at the Sha’arei Mishpat Academic College of Law and Science, revealed a series of figures regarding intermarriage in Israel that should set off alarm bells.

Actually, I am very happy bout these figures, I did not know they exist. So thank you Dr. Netanel Fisher, you actually did me, and many of us in mixed relationships, a favour.

According to Israel’s Central Bureau of Statistics (CBS), there are 85,000 intermarried couples in Israel in which one partner is Jewish and the other is not, representing 7% of all marriages in the country

I recently exchanged emails with Yaakov Katz, Editor-in-Chief of Jerusalem Post, and I was planning to email him about this article, but then I remember he does not care about me. I asked him for a space before, and he was the typical nice journalist that has no interest in your story but just won’t tell you no in your face. I did journalism for a while, and I do PR, you can’t be sneaky on me.

We might have a baby in the future, and we will make sure he embraces his Latino side, as much as his Jewish side. We have decided to raise our kid here, for him to be close to his roots, the predominant ones, the ones that the world keeps trying to eradicate over and over.

Since the CBS statistics do not include categories such as Israelis married to foreign workers without residency or citizenship, or couples living together, the actual numbers are almost certainly higher.

We are over 85 thousand partners, surfing through bureaucratic challenges, language barriers, cultural differences and more, and only because we love our partners and here, Israel, is where they belong. I am not asking for Israel, or people like Michael Freund or Yaakov Katz, to give us a hand, I am just asking for them to let us be. We exist.

Ps. excuse the grammar and spelling mistakes, I just needed to post this now and today, no time for checking.

About the Author
Ana is a curious girl that after exploring Israel and pursuing an MA in TAU during 2017/18, also found her life partner in a museum in Jerusalem. In the middle of a pandemia, and a world crisis, she married her Jerusalemite lion and moved to Israel for good. She writes about her experiences as a wife, as a foreigner in the Holy Land and as a woman exploring life.
Related Topics
Related Posts
Comments