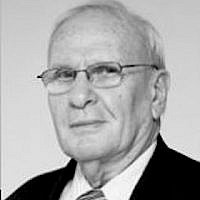 The Blogs
Oded Eran
Apply for a Blog
Advertisement
Please note that the posts on The Blogs are contributed by third parties. The opinions, facts and any media content in them are presented solely by the authors, and neither The Times of Israel nor its partners assume any responsibility for them. Please contact us in case of abuse. In case of abuse,
Report this post. 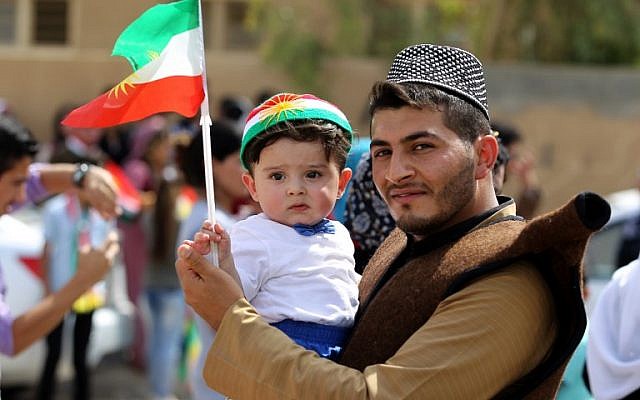 An Iraqi Kurdish man poses as he carries a child wearing the Kurdish flag on his head during a celebration in the northern city of Kirkuk on September 25, 2017, as Iraqi Kurds vote in a referendum on independence. (AFP Photo/Ahmad Al-Rubaye)

Once again Israel finds Itself alone in the international arena. This time the isolation is not due to the Israeli-Palestinian situation but because, unlike the rest of the regional and international community, Israel supports political independence, not that of the Palestinians, but of Kurdistan, the Kurdish region in northern Iraq. From the Kurdish point of view, one wonders if it really is an asset to have Israel as the single state supporting its cause.

The roots of Israeli support for Kurdistan were sown in the mid-1950s. For Israel, the support, mostly in security, was part of an effort to break the political siege imposed by the surrounding Arab world. The Kurds, who lost their chance at independence in when the Second World War hastened the end of the old era of colonialism, kept the hope alive in the post-war era and were grasping for any help they could get. Israel, being the only non-Arab state without a Kurdish minority in the region, was a natural ally.

It is important to remember that Israel’s support at the time did not draw opposition from either Iran or Turkey, two of the non-Arab Middle East nations with which Israel was developing an informal alliance. As a matter of fact, the Israeli-(Iraqi) Kurdish connection was never an issue in Israel’s relations with Iran or Turkey and it has not played a role in the past or present crises in these relations. Whatever the nature of Israel’s assistance to Iraq’s Kurds, both Iran and Turkey always turned a blind eye as long as the Kurds did not raise the banner of independence. Now that they have openly taken steps towards independence, leaders of Iran and Turkey are suddenly using the fact of Israeli support to denigrate the Kurdish leadership.

That situation has dramatically changed because of the Arab Spring and its aftermath. Two states, Iraq and Syria, that host sizable Kurdish minorities, witnessed the breakdown of state central authority through the loss of territorial integrity with parts of them controlled by imported and local rebel groups. Kurdish military forces in both Syria and Iraq have been fighting ISIS, sometimes alone, succeeding in blocking the expansion of the ISIS territory and, eventually, participating in the international effort to eliminate the Islamic State.

The Kurds in Iraq and Syria would have been amiss not to have leveraged the situation in order to further their political cause. The Kurds themselves have been aware of the opportunities created but also by the constraints and weaknesses. Masoud Barazani, leader of the Kurdistan Regional Government, twice delayed the referendum that finally took place on 25 September. realizing the internal Kurdish lack of widespread support, strong opposition in the international community and the fact that Mosul, with its large Kurdish population, was not yet fully liberated.

When in June this year Barazani set the date for the referendum, there was still time for diplomacy. Although he was a prisoner of his own pledge for a referendum, Barazani could have accepted a discreet Israeli intervention in Washington or even in Brussels aimed at a quiet dialogue eventually producing a formula that would give the Kurds in Iraq partial progress in their pursuit of independence, and provide an excuse for a further delay of unilateral steps, thereby avoiding the measures that Turkey, Iran and Iraq are currently considering.

Instead, the Prime Minister of Israel chose in September 2017 to repeat his statement, made already in 2014, supporting “the legitimate efforts of the Kurdish people to achieve their own state.” In this statement, Netanyahu went beyond what was needed for the Kurds in Iraq, even if they had requested Israeli support. The Kurds are spread across four different countries, but only the Kurds in Iraq could and did vote in the referendum. Even if the Kurds of Iran, Turkey and Syria aspire to independence, they would no doubt beg Israel to refrain from any sign of support, and certainly to avoid public declarations. The statement does not add one iota to the prospects of success for the Kurds in Iraq, may hurt the Kurds in the three other countries, and does not enhance Israel’s ability to play a significant role in Middle East politics by leveraging its unique relations with the Kurdish Regional Government. Some observers who follow the these developments claim Netanyahu’s open support was aimed at signaling to Erdogan that, just as Turkey meddled in the Al Aksa tensions and supports Hamas, so can Israel touch Turkish sensitive national interests.

Since the referendum and its results do not require any legal or political action, there is still time for diplomacy, especially on Israel’s part, especially in Washington. The US has not given its support to Kurdish independence in Iraq, staying loyal to its position on the sovereignty and territorial integrity of states, especially in Iraq, and mindful of Turkey’s position on this issue. The sympathy that some harbor towards Kurdish aspirations is overshadowed by deep concern over further destabilization in the region if Kurds push their campaign forward.

Washington’s position or that of other relevant players is not likely to change. If it does, change will only come when Kurds, especially in Iraq and Syria, close ranks, unite behind a democratically elected leadership and begin their march on the same path as other national movements. Israel can help the Kurds buy — and make use of — the time that is required for such an action plan.

Oded Eran is a veteran Israeli diplomat and currently a senior researcher at the Institute for National Security Studies.