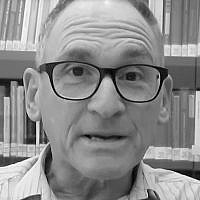 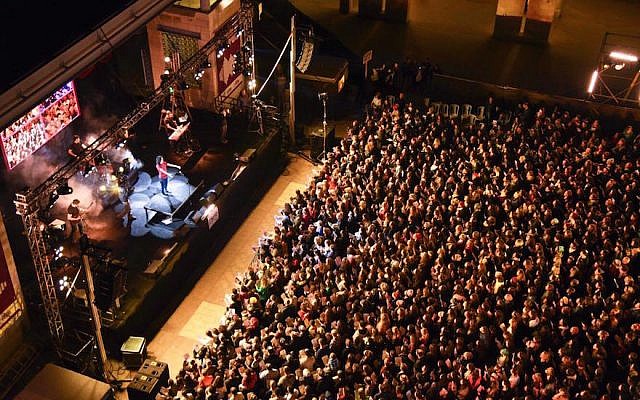 Update 16/04/2018: Koolulam has uploaded the video it made of this event to its Facebook page. Find it here. It gave me goosebumps.

TEL AVIV (JTA) — I’m not sure where she got this, but our daughter believes American Jews imagine that Israelis work in the “refet” (cowshed) all day and then gather for a “kumsitz,” sitting around the campfire at night to sing Naomi Shemer songs.

After our experience at the recent Koolulam gathering in Tel Aviv, I’m inclined to say her perception is closer to reality than stereotype.

Koolulam is a year-old social phenomenon that has gathered thousands of Israelis to sing everything from songs by Sia and Imagine Dragons to…Naomi Shemer, perhaps Israel’s greatest songwriter. According to its Facebook page, “The project enables its participants to enjoy the feeling of togetherness through a deep communal experience — our sounds and voices coming together to create a social choir, full of hope and optimism.”

It’s the kumsitz updated for the 21st century, with Israeli tech, glitz, media savvy and the positive vibes we need.

On Monday, Israeli President Reuven Rivlin joined Koolulam at a mass singing of Shemer’s “Al Kol Eleh” to honor Israel’s upcoming 70th anniversary. A cute video he made convinced my wife to get us tickets for the event at Tel Aviv’s basketball arena, a shed where shouts from Maccabi Tel Aviv basketball fans and the wail of electric guitars from overseas rockers are more common than a mass rendition of a classic Hebrew folk song.

We arrived at the sold-out arena alongside 12,000 Jewish Israelis — young and old, religious and secular, Ashkenazi and Sephardi. Previous Koolulam events in Jerusalem and Tel Aviv have focused on cancer patients and their doctors, Holocaust survivors and women, and even drew a smattering of haredi Orthodox. On February 14, Muslim, Christian, and Jewish Israelis were invited to Haifa to sing Matisyahu’s hit “One Day” in Hebrew, English and Arabic; 3,000 people showed up.

We had chosen to stand on the arena’s floor, which gave us a ringside view. A boom camera swooped overhead. Singer Shlomi Shabat stood alongside us as he awaited his solo, and the Jerusalem Street Orchestra was meters away.

We sensed the nervousness of co-founder Michal Shahaf Shneiderman, who runs an Israeli ad agency, as she warmed up the crowd for Koolulam’s biggest event. We felt the floor rumble as the charismatic conductor and musical arranger Ben Yefet, curls and dreadlocks flying, bounded across the stage in the run-throughs and implored us to start and stop on his command and to e-nun-ci-ate the lyrics.

Unlike smaller events, where Koolulam moved participants around and created three-part harmonies, the stadium was divided into two groups. It felt like a camp color war as Yefet implored the Blues to out-sing the Greens. I sighed with relief when we were told to sing the melody, not the harmonies.

Shemer, one of Israel’s first-generation songwriters and performers, released “Al Kol Eleh” on a 1981 album, a copy of which I somehow have. I heard her sing it in Albany, New York, at a sad and haunted performance one day after Yitzhak Rabin was assassinated in 1995. The title is translated as “About All These,” or “Over All These Things.” According to one historian, it was written to comfort Shemer’s sister, who had lost her husband.

The song’s bittersweet lyrics implore us to accept the bee’s honey and its stinger. It asks the “good Lord” to save the houses we live in “from the sudden warlike thunder,” in a Theodore Bikel translation. Evacuees from Yamit, the town bulldozed in 1982 when Israel returned the Sinai to Egypt, adopted it as their anthem because of the line, “Do not uproot what has been planted.”

With the passage of time, the song’s politics have muted. The lyrics can feel overly sentimental, but they gave me goosebumps as I sang them surrounded by 12,000 others, including Rivlin and Tel Aviv Mayor Ron Huldai. 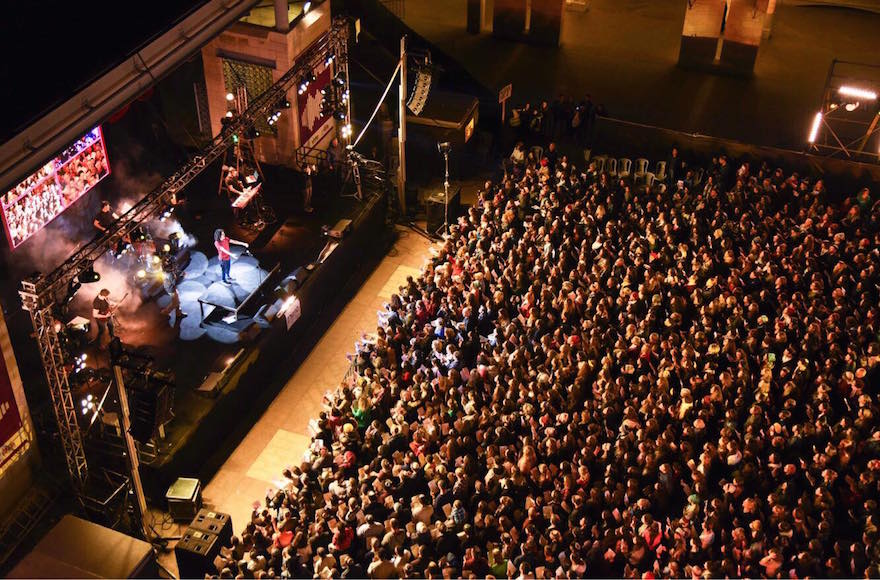 Yefet drilled the Blue and Green teams through repetitions of the refrains and choruses, singing each part in his lovely, trained voice. Once we were primed, the Jerusalem Street Orchestra took  the stage, as did Shabat, a popular singer primarily known for Mizrahi pop.

The lights dimmed, Yefet cued the orchestra, Shabat sang the opening line and 12,000 hesitant voices joined in. We gained confidence through the middle, stopped near where Yefet wanted and waved our smartphone flashlights. We finished raggedly, but my heart swelled and my eyes teared.

The crowd erupted in applause, but Yefet didn’t let us pat ourselves on the backs. He coached us through the untidy moments, and we sang it again. And again. I thought our third take would be our last. It wasn’t. Our fourth take was better. Our media-savvy group figured they would edit the best parts from each take into the finished product. I was satisfied. Yefet wasn’t. We did a fifth take.

Throughout, emcees implored us not to take selfies or post on social media. They urged us to be in the moment and focus on singing, not the meta-level activity of recording ourselves. They gave us a moment between takes to feed our egos and the media beast, and friends told me afterward their Facebook and Twitter feeds were overrun with clips, snapshots and comments.

When we entered the arena, I remarked that this was a slick event: the production crew wore earpieces; Yefet wore a “Madonna” (Israeli slang for a cordless mic); TV-pretty emcees read patter from cue cards. Video and still photographers captured the scripted action from multiple angles. If the earlier videos are any sign, our video will boast high production values.

But as my wife said, the emotion, passion and joy created by this 21st century kumsitz was authentic, honest and deeply felt. Unlike the singing of a rock star’s words back to them, our voices didn’t feed a massive ego. Rather it felt like a modern-day prayer, passionately chanted, enhanced by its “nusach” (spiritual melody), and spiritually heightened in a group setting.

As we left, spent and hoarse, my cousin said such events are not only meaningful, they are essential. Koolulam isn’t the first to teach mass singing. Canada’s Choir!Choir!Choir! recorded a mass singalong of Leonard Cohen’s “Hallelujah” in 2016. But Koolulam’s success — from zero to tens of thousands of singers within a year — taps into Israelis’ need to nourish and cherish the hope we have for our chaotic, stress-filled country.

Koolulam’s slogan is “Singing is Believing.” I challenge even the hardest-edged cynics to remain dry-eyed while watching Holocaust survivors, Arabs and Jews, cancer patients and their doctors, and the multifaceted Israeli public raising their voices in unison.

Alan D. Abbey is media director of the Shalom Hartman Institute. He lives in Jerusalem.