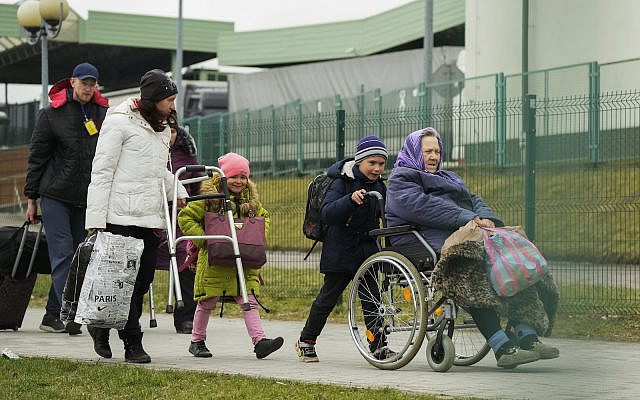 Israel is obviously not alone in confronting the Ukrainian refugee crisis, but opinion in Israel about accepting non-Jewish refugees is disturbingly mixed.

According to a recent Israel Democracy Research Institute Survey, 44 percent of all Israelis support welcoming Ukrainian refugees regardless of their religion, which means that the majority of Israelis are opposed to welcoming these non-Jewish war-terrified refugees. Breaking down the percentages into the “yes” and “no” columns offers an unsettling picture of the differences between the Israeli-middle and left-wing on the one hand and the Israeli religious and right-wing on the other with respect to the Jewish value of welcoming the stranger.

On the political left, 74% are open to refugees – in the political center, 59.5% are in support – on the political right, 31% are supportive – among the ultra-Orthodox, only 6% welcome Ukrainians – in the national religious movement, the figure rises to 20% – among the traditionally religious, 35% –the non-religious traditionalists, 35% – and amongst secular Israelis, 60%. There are differences between Jewish-Israelis and Arab-Israelis. See this article in The Times of Israel.

On the religious right, there might well be a fear that the “Jewish character” of the state will be threatened if large numbers of non-Jewish immigrants enter and remain in Israel for a limited or indefinite period of time. Others in that camp may be suspicious and resentful of non-Jews, having themselves come from nations in which antisemitic persecution made their lives miserable and forced them to leave their country of origin.

Regarding middle-left-wing-Israelis, their support of Ukrainian refugees coming regardless of whether they are Jewish or not suggests that they are not concerned about this wave of refugees being an existential threat to the “Jewish character” of the State of Israel?

Israel set a maximum of 100,000 Ukrainians that would be welcome as refugees, many of whom are Jewish, but whatever the number is of non-Jews that wish to come, this small immigration wave is hardly a threat to Israel’s “Jewish” character and majority population. Most of these people are not immigrants anyway. They are refugees fleeing the violence of war, and it is assumed that most will want to return to Ukraine once the war is over. Even if they remain and eventually become citizens, the numbers are not overwhelming.

The difference in attitude towards Ukrainian refugees between the middle-left and religious-right is based, I suggest, on how each group defines “Jewish state.” For the religious right, “Jewish” means creating a “Halachic state” as opposed to a liberal democratic state. For the middle-left, “Jewish” means enabling Jewish culture to flourish in a liberal democratic state.

By all markers, Jewish culture in Israel is flourishing and secure. Over time, Judaism has been subsumed into the Israeli character itself. Those in the middle-left are, by all accounts, proud liberal Jewish nationalists and proud Jews. They want to take part in the global culture and economy. They are happy that the country speaks Hebrew and lives according to the Jewish calendar. They want Jewish and Hebrew education for their children in the school system.

The difference between the religious right and the middle-left comes down to how each regards Jewish tradition playing itself out in the State of Israel, and what values are most important.

For 3,500 years, a principle Jewish value has been “to welcome the stranger” (cited 36 times in the Torah). For the religious right, this mitzvah applies only to Jewish refugees. For the middle-left, it applies universally to any refugee in distress, Jewish or not.

Though Israel is too small a country to take in millions of people – millions are not clamoring to come – the call of this moment is about helping Ukrainian refugees in crisis. There is a process in becoming an Israeli citizen, and there is no need to change that process.

The Jewish value of “welcoming the stranger” (indeed, any stranger fleeing persecution and violence) ought to compel Israel to throw open the gates and let all refugees, Jewish and non-Jewish, who choose to come to do so and be welcomed with open arms. Not only is doing so based in Jewish values but also in our own historic Jewish experience of being a persecuted people forced to wander the earth.