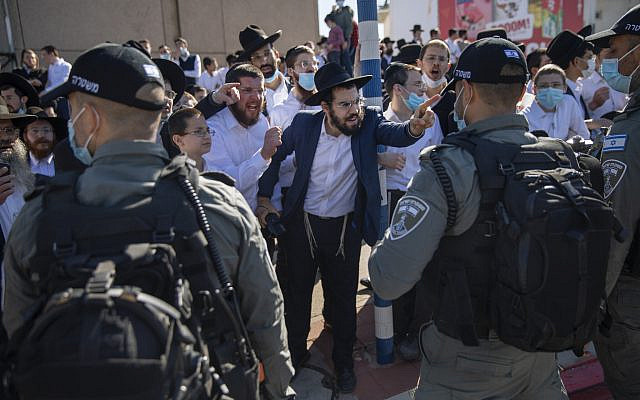 It was a historic night. Benjamin Netanyahu had been defeated and Ehud Barak was standing on the balcony of Rabin Square promising “the dawn of a new day.”

But what I remember most from that May 17, 1999 victory rally were the thousands of jubilant supporters around me building into the crescendo of a rhythmic chant: “Rak lo Shas, Rak lo Shas.” Anything but Shas.

It was shocking. Even at that early stage of my political evolution, the repercussions of the call were clear. For Barak to build a coalition government, he would have to choose between teaming up with the seemingly diplomatically agnostic ultra-Orthodox Shas party or with the vanquished right-wing Likud party that opposed Palestinian statehood and territorial compromises.

After a campaign in which Barak vowed to restore the legacy of Yitzhak Rabin by pursuing genuine peace talks with Syria and the Palestinians, the choice seemed obvious. Addressing domestic concerns, like the religious coercion that had long irked Israel’s secular majority, would have to wait in favor of Israel’s more pressing agenda of resolving its regional conflicts.

With the hindsight of 22 years, though, it’s fair to say that the street knew better. Israel’s great Faustian bargain with the ultra-Orthodox has been a colossal failure.

With nothing to show for its peace agenda, Israel’s true existential issues of religion and state have been neglected as the right and left remained bitterly divided over a hypothetical ideological decision that never came to a head.

The wedge issue has since been dulled. What hasn’t changed is the willingness of all political players to succumb to the extortion of the ultra-Orthodox parties, which are empowered by Israel’s system of proportional representation.

This upcoming election offers a potential do-over that may be Israel’s last chance to fix the failure.

Shas and its Ashkenazi sister party United Torah Judaism have essentially held the balance of power in government since 1984, aside from brief exiles into opposition that were prompted by the late Tommy Lapid in 2003 and his son Yair Lapid in 2013.

The result has been continued extortion of the major parties at the expense of Israel’s long-term social and economic prospects, perhaps past the point of no return. That has also sparked an internal culture war and growing secular resentment of ultra-Orthodox military draft exemptions, disproportionate state subsidies and a near-monopoly over matters of marriage, divorce, conversion and burial.

This long-simmering anger has risen to new heights over brazen ultra-Orthodox violations throughout the coronavirus crisis that have endangered everyone.

With the left decimated and its diplomatic agenda on ice, there really is no justification anymore to give the ultra-Orthodox parties such leverage. But the Likud, led by Netanyahu, still does. Whereas once it could be explained as an ideological choice to prevent concessions to Palestinians, now it is merely a cynical ploy to stay in power and, in Netanyahu’s case, to stay out of jail.

The last politician to truly stand up to the ultra-Orthodox power brokers was Tzipi Livni, who in 2009 refused to buckle and, as a result, never became prime minister. It’s a lesson well learned and not to be repeated by any leader with such lofty ambitions. The formula is simple: refusing to partner with the ultra-Orthodox parties may get you more votes, but it won’t make you prime minister.

However, the current fragmentation that has failed to produce a clear-cut candidate to succeed Netanyahu could ironically produce this welcome byproduct. On the surface, not much unites Gideon Saar, Naftali Bennett, Yair Lapid, Avigdor Liberman, Labor and Meretz. But they have far more in common with each other than they do with the ultra-Orthodox parties.

With the Palestinian issue essentially shelved for the foreseeable future, and with a growing number of Israelis realizing that a vote for Netanyahu is essentially a vote for the ultra-Orthodox, everyone else could potentially band together to form a viable alternative. With Israel’s current demographic trends, it could be their last chance to muster such a majority.

If they can’t, there is much to be concerned about.

The ultra-Orthodox leadership have leveraged their clout over the decades to maintain a segregated lifestyle in which they run a separate network of schools that teach very little math, science and English, raise large families on taxpayer-funded handouts and enforce an oppressive public status quo.

But those most harmed are the vast majority of the ultra-Orthodox themselves, who are being provided few skills to cope with the challenges of the modern world. This is anathema to the Jewish tradition of learning, and a younger generation has offered some pushback by seeking higher education and demanding greater inclusion in Israeli society. But the leadership is still resistant to major change, sentencing their followers to a life of ignorance and poverty.

Dan Ben-David, a Tel Aviv University economist who has researched these trends for 25 years, says endless rounds of dialogue have failed to yield results and the only option left is to go “cold turkey” and immediately cut all funding to schools that refuse to teach a basic core curriculum.

“A population that does not receive a first-world education will not be capable of maintaining a first-world economy,” explained Ben-David, president of the Shoresh Institution for Socioeconomic Research. “Without that, there can be no first-world health and welfare systems, nor a first-world army in the planet’s most dangerous region. This is the future that’s approaching at accelerating speed if we don’t get our act together before it’s too late.”

The recent outbursts of violence when police finally decided to enforce the law against massive ultra-Orthodox gatherings highlight just how explosive an issue this has become and how much more dangerous it could be if lawlessness prevails among Israel’s fastest growing sector.

Israelis used to say that once they made peace with their Arab neighbors, they would finally get around to making peace among themselves – or descend into civil war. But there is no logic in waiting any longer for something that may never happen, all while the country’s future continues to be compromised.

Israel’s number one domestic issue and its most fraught fault line is the outsize power and influence of the ultra-Orthodox political establishment. It’s time to tackle this head-on with a broad coalition that seeks the wellbeing of everyone, including the ultra-Orthodox themselves.