The Blogs
Ely Karmon
Apply for a Blog
Please note that the posts on The Blogs are contributed by third parties. The opinions, facts and any media content in them are presented solely by the authors, and neither The Times of Israel nor its partners assume any responsibility for them. Please contact us in case of abuse. In case of abuse,
Report this post. 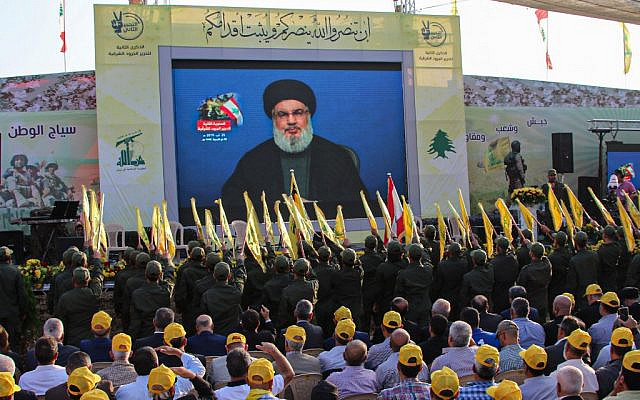 Supporters of the Shiite Hezbollah terror group gather to watch the transmission on a large screen of a speech by the movement's leader Hassan Nasrallah, in the town of Al-Ain in Lebanon's Bekaa valley on August 25, 2019. (AFP)

The struggle against Iran is entering a difficult period for Israel. Ibrahim Raisi, a conservative and extremist leader close to Supreme Leader Ayatollah Khamenei, was elected president of Iran; President Biden’s administration is seeking to sign a nuclear deal with Iran that currently looks worse than its precursor; and at the same time, the United States is reducing its military presence in the Middle East.

Iran, for its part, has not abandoned its aspirations to secure a territorial foothold in Syria, strengthen its ties with Hamas in Gaza, and encourage it to act against Israel, and continue to back the Houthis in Yemen in their struggle against Saudi Arabia and Israel.

In parallel with working to persuade the United States not to make concessions to Iran on the substantive issues in the nuclear agreement, and continuing the war against Iranian encroachment in Syria and its efforts to upgrade the huge Hezbollah arsenal to precision missiles, Israel needs a more comprehensive strategy along the lines of its Periphery Doctrine that built strategic alliances in the region in the 1960s and 1970s.

There is a significant Kurdish minority in Syria and Iraq that strives for independence or at least autonomy. Assisting the Kurds on both sides of the border is important for building a buffer between Iran and Syria.

Iran itself has a dire problem when it comes to minorities. Only about 55 percent of its population is of Persian descent. The rest are Shia Azeris, Kurds, Ahwazi Arabs and Sunni Balochs. All Sunni minorities are concentrated within Iran’s borders, and there are opposition groups fighting the regime in Tehran and striving for an end to the repression and economic neglect by the central government. It was in these regions that the worst riots occurred in 2019 and 2020.

As for Lebanon, Israel needs to focus its propaganda, political and strategic efforts on the Sunni, Christian and Druze communities. Lebanon is in a deep economic and governance crisis, and a large portion of the population blames Hezbollah, holding Hassan Nasrallah and his allies in the administration personally responsible for the criminal neglect of the population’s basic needs and the takeover of state assets. Israel must learn from past mistakes and illusions and act swiftly and intelligently to help the major communities, including independent Shia actors, free themselves from the grip of Hezbollah and Iran.

Instead, Israeli leaders are threatening Lebanon with the destruction of its national infrastructure in the event of an all-out war with Hezbollah. This rhetorical posturing is likely to turn all of Lebanon’s communal factions into Israel’s sworn enemies. And, even if fully justified on the grounds of self-defense, the international community is unlikely to stand for an all-out response.

It is clear that the only way Hezbollah will launch a comprehensive war against Israel is by order of Tehran, in accordance with its strategic needs, especially in the context of its nuclear project. Massive missile fire from Lebanon into Israeli territory could cause countless civilian casualties in Israel, and Hezbollah is cognizant of the price an Israeli reprisal would exact on its own already-diminished stature within the Lebanese populace.

Therefore, to achieve deterrence, Israel should make crystal clear that it has Iran, not Lebanon, in its crosshairs. The message must be: Massive firing from Lebanon into Israeli territory will be met with massive firing at Tehran and its nuclear facilities.

It’s worth remembering that Ayatollah Khomeini decided to end the war with Iraq — “swallowing the poison” as he put it — only after Saddam Hussein ordered the firing of Scud missiles on Tehran and caused a third of its population to flee the city. Presumably, our new allies in the Gulf and beyond will be willing to assist in this strategic endeavor.

Israel must state this policy clearly and publicly and back it up with actions in order to get the message across to all target audiences in the region and in the international community.