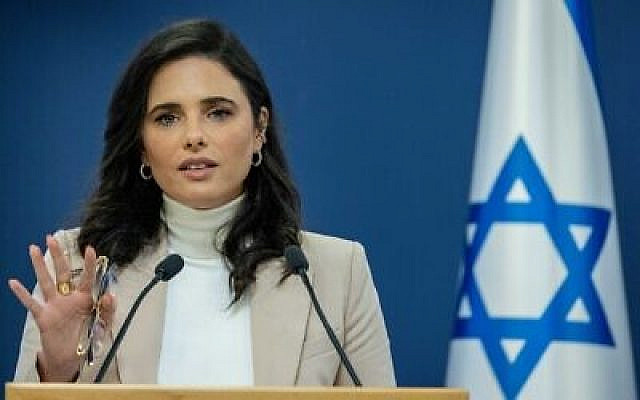 Since scarcity has value, I cannot miss a rare opportunity to agree with Interior Minister Ayelet Shaked. The last time I felt this way was when she starred in a campaign ad for a fake fragrance called “fascism,” which was a rare case of truth in advertising. Now an opportunity has arisen once more, over her controversial “Citizenship Law” which leftists love to hate.

The legislation, which actually extends a temporary 2003 amendment to the actual Citizenship Law, suffers from bad optics but is far from indefensible: it’s fair enough for Israel to try as this measure does to bar Palestinians from becoming de-facto Israelis through marriage, certainly in the absence of peace.

Passed at the height of the Second Intifada, the law makes it extremely difficult for Israeli citizens to marry non-citizens from the West Bank or Gaza and then bring them into Israel for naturalization; such couples are compelled therefore to live in Palestine or elsewhere. It needs occasionally to be renewed lest it expire, and the Shin Bet always urges for this, armed with credible evidence of cases in which conjugal imports became terrorists.

After many delays caused by political machinations (including opposition to it not only within the diverse coalition but also, ridiculously, from the opposition Likud, which of course, in fact, supports the measure and initially authored it), last week it finally was adopted in a first of three required Knesset votes.

Defenders of the law – including Shaked herself on Channel 12 this weekend – argue Israel has no obligation to allow immigration from everywhere on earth. Indeed, like all countries, it has every right to restrict immigration from enemy states. Are the Palestinians enemies? Well, relations with the Palestinian Authority are sadly still not formalized, with basically everyone to blame, and Israel is effectively at war with Gaza, with Hamas to blame. Rare is the country that allows such unchecked immigration, even when marriage is the reason.

Israel has excellent reason not to want to naturalize Palestinians and hand them national IDs that give them free movement and other rights. You do not need to be a conspiracist to imagine that without the restriction, Hamas and other terrorist groups would start schooling terrorists in the ways of love. 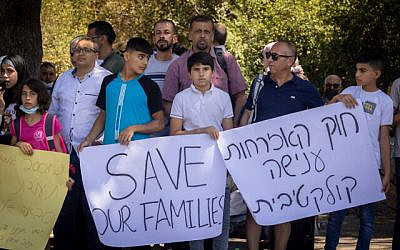 People hold a protest against the “family reunification law” outside the Knesset, the Israeli parliament in Jerusalem, June 29, 2021. Photo by Yonatan Sindel/Flash90 ***

There is some harshness here: Arab citizens of Israel have family members – usually distant, after 73 years of separation, but still family members – across the Green Line. They might reasonably want social contact, and social contact can lead to all kinds of genuine love stories, and none of it is very ideal (more unfair is the outrageous and self-defeating foot-dragging on requests by East Jerusalemites to receive Israel IDs).

Opponents of the law call it racist since it clearly targets Palestinians. They have a point – Israel would be wise to broaden the language somehow – but they protest too much. These opponents (factoring out representatives of the Arab minority) tend to be from the left fringe of Jewish Israeli politics. They would do well to reconsider the knee-jerk approach as a way to restore some of the public credit they squandered with various incompetence. The Israeli public is capable of blindly following any security argument – never mind one that is correct.

But they’re discomfited by the poor optics; leftists the world over are much concerned about optics. The poor optics come from the suspicion that demographics are a factor – even a secondary factor – in the eagerness to extend the law. And that it’s not just any demographic concern: an inelegantly targeted one. And this, too, is true: the bill discourages immigration specifically of Palestinians.

This charge is sometimes denied, and that’s just silly. Israel has not been struggling to maintain a strong Jewish majority against a feared influx from Bhutan. Israel is a Jewish-majority country (for now) with a large Arab minority and while it should afford this minority equal rights (and mostly does) one cannot deny what is obviously true.

In my experience, Arab Israeli citizens mostly accept this unenthusiastically as part of the equation – like the unfortunate anthem whose lyrics are addressed solely at Jews. Indeed, it is stoically regarded by many as part of the price they pay for the privilege of living in a developed democracy and not, say, Syria or Lebanon.

The Jewish settlement of the West Bank – encouraged at this point solely by the right – is making Israel inseparable from the West Bank. A binational and non-Jewish state may be the result, not so long from now. In her TV appearance, Shaked tried to minimize this by claiming that the Palestinian Authority is a separate entity from Israel; I do not know if she believes this, but a rude awakening is coming: the Palestinians will all demand citizenship.

The only way to avoid demographic oblivion for Israel, with or without a citizenship law, is for a true partition to happen, via a peace treaty or unilaterally. This probably requires the ascension in Israel of a genuinely intelligent government, freed of the right wing.

That may be a long while coming. But if by some miracle it does, liberalizing immigration from Palestine is a card it might very legitimately hold out as an incentive to the Palestinians to get serious about peace. That would require the Palestinians to stop insisting on impossible conditions like the right of return and, also, probably, control of Jerusalem’s Old City.

Until such time, the Citizenship Law is fine, even if its proponent is Shaked.