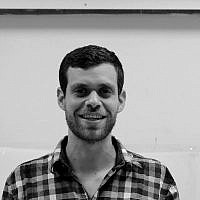 The Blogs
Matan Meron
Apply for a Blog
Please note that the posts on The Blogs are contributed by third parties. The opinions, facts and any media content in them are presented solely by the authors, and neither The Times of Israel nor its partners assume any responsibility for them. Please contact us in case of abuse. In case of abuse,
Report this post. 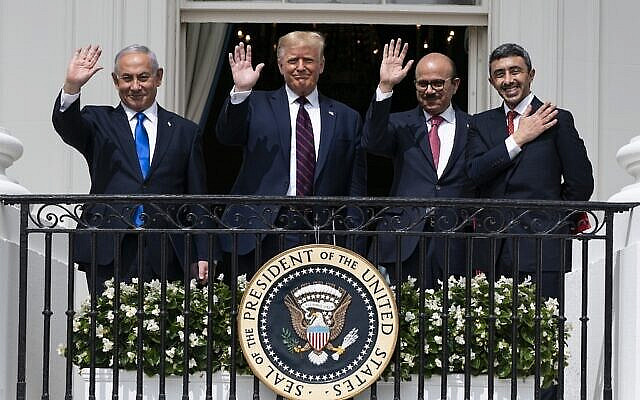 FILE - In this Tuesday, Sept. 15, 2020 file photo, Israeli Prime Minister Benjamin Netanyahu, left, U.S. President Donald Trump, Bahrain Foreign Minister Khalid bin Ahmed Al Khalifa and United Arab Emirates Foreign Minister Abdullah bin Zayed al-Nahyan pose for a photo on the Blue Room Balcony after signing the Abraham Accords during a ceremony on the South Lawn of the White House in Washington. Saudi Arabia insists officially that there can be no formal ties with Israel before Palestinian statehood is achieved, but state-backed media and clerics have softened their tone toward Jews and there has been no official condemnation or criticism of the deals signed by the UAE or Bahrain with Israel. (AP Photo/Alex Brandon, File)

“There will be no advance and separate peace with the Arab world without the Palestinian process and Palestinian peace”       – Former US Secretary of State John Kerry, (12/04/16)

The above, outdated perception, has lost its validity. There has been an ongoing shift in Israel’s long-established paradigm concerning peacemaking in the Israeli-Palestinian conflict. A major milestone in this shift was the signing of the Abrahamic Accords and the following peace agreements with the United Arab Emirates (UAE) and Bahrain.

Since its inception, the Arab world has refused to grant Israel any form of recognition. The first Arab state to break away from this consensus was Egypt, which signed a peace treaty with Israel in March 1979. The only other Arab state to follow Egypt’s example, was, until recent years, Jordan in October 1994. Yet, there have been a number of Arab states that have formed some level of diplomatic ties with Israel without signing a peace treaty: Morocco between 1994 and 2000, Tunisia between 1996 and 2000, and Oman between 1996 and 2000 as well. All of these diplomatic ties ended with the eruption of the second Intifada.

The great leap towards peace from the Gulf Cooperation Council (GCC) has been led by the UAE and Bahrain who both signed peace treaties with Israel on the 15th of September 2020 together with the Abrahamic Accords. The previously undisclosed relations between the UAE and Israel over the past 20 years were led by the Israeli Ministry of Foreign Affairs, which helped broker economic agreements between Israeli and Emirati companies. At the same time, the countries had secret security relations in an effort to contend Iran’s aggression in the region. Other than their mutual economic interests, Iranian aggression was also a major catalyst for the peace agreements signed with the UAE and Bahrain. Israel and the UAE both share two main enemies: on the one hand, Iran and its axis of resistance in the region, and on the other, the Muslim Brotherhood and Sunnite extremism. Strategically, the UAE has been anxious since the alleged Iranian attack in Saudia Arabia in September 2019 and threats released by Iranian-backed Houthi rebels in Yemen to launch missiles on the UAE.

It is interesting to look at Palestinian and Arab League reactions to the peace agreements as further developments of the shift in the paradigm. The Palestinian Authority announced on the 18th of August 2020, following the joint Israeli-UAE announcement on normalizing relations, that they consider it a “stab in the back” that they totally reject. Shortly after, the Palestinians recalled their ambassadors to the UAE and Bahrain. The Arab League, in turn, refused to accept the addition of a statement condemning the peace agreements, as requested by the Palestinians, at the Arab League summit on the 9th of September 2020. The Palestinians have realized that the Arab world is accepting of the idea of normalizing relations with Israel. This realization has led the Palestinians to return their ambassadors to the UAE and Bahrain on the 18th of November 2020. This can be seen as the beginning of the effect of the paradigm shift.

Following the Abrahamic Accords, Israel and Sudan announced the normalization of their relations on the 23rd of October 2020. This was another major milestone because, in contrast to the UAE and Bahrain who were never in real conflict with Israel, Sudan actually took part in the fighting in Israel’s War of Independence in 1948 and the Six-Day War in 1967. The peace with Sudan is also a very symbolic turn of events because it was at the Arab League summit in Khartoum, shortly after the Six-Day War, that the Arab states agreed on the famous three nos: no to recognizing Israel, no to negotiating with Israel and no to peace with Israel. 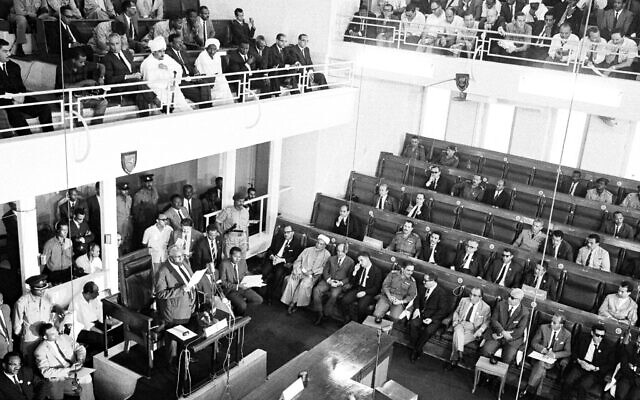 General view of the closing session of the Khartoum Summit Conference of Arab Heads of State in the Sudanese Parliament House on, Sept. 1, 1967. Addressing the assembled Arab chiefs is Sudanese President Ismail al-Azhari. (AP Photo/Claus Hampel)

The latest development in the region is the US-brokered peace agreement between Israel and Morocco which was made possible after the US announced that it “recognizes Moroccan sovereignty over the entire Western Sahara territory.” These renewed relations are another attempt to gather regional support for the US-Israel backed opposition to the Iranian regime. Also, the new Israeli-Moroccan alliance was only brought within reach thanks to the Arab Gulf states’ embracement of Israel. The Palestinians have, without a doubt, changed their tone because they did not release a condemnation as in previous cases.

The US administration’s efforts in the last year to promote Israel’s stature in the region and enlarge the newly formalized opposition to the Iranian regime have brought major developments to Israel`s relations with the Arab world. These newly formalized peace agreements between Israel the UAE, Bahrain, Sudan, and Morocco, are also thanks to the ongoing shift in Israel’s paradigm concerning peacemaking in the Arab world. If in past years, Israeli administrations, as well as US officials, believed that the Palestinians are the gateway to forming bilateral relations with the moderate Arab states, today Israel understands that the formation of ties in the Arab world is a separate process to the Palestinian peace process and is also more effective that way. The changing Israeli perspective towards peacemaking in the region has also affected the Palestinians because, if at first, they condemned the UAE and Bahrain peace with Israel, they came to terms with the Morocco-Israeli peace and did not condemn it publicly.

“No Arab state, no moderate Sunni state, no one will have open relations with Israel…as long as the Palestinian problem isn’t solved.” — Former PM of Israel Ehud Olmert, (01/22/20)

Olmert, who has led peace talks with the Palestinians as mentioned earlier, could not have been more wrong in this statement. Not only have four Arab states formalized open relations with Israel, but this is only the beginning of a new phase in Israel’s relations with the Arab world.

On a personal note, I hope these peace treaties will bring about real peace and bear economic and strategic fruits, as well as a friendship between the people of Israel and the people of these moderate Arab states. I also wish that this trend will continue, and the Arab world and Israel will create more bonds and ongoing peace.

About the Author
Matan Meron is a 26-year-old student in the final year of his BA in Political Science and Middle Eastern Studies and Islam at the Hebrew University. A Jerusalemite from an early age, he lived in the United States for several years while his father was posted to the Embassy of Israel in Washington DC. He currently works as a tour guide in the Israeli Knesset and is also an intern at the Jerusalem Institute of Justice.
Related Topics
Related Posts
Comments