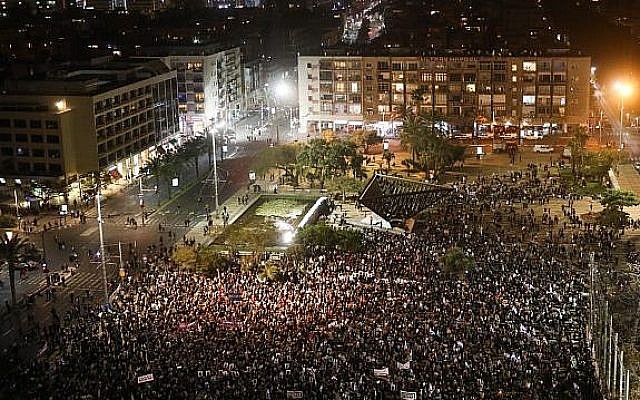 In Israel, the Passover holiday coincides this year with the planned activation of the expulsion order against African asylum-seekers slated to begin on the first day of April. It is more than ironic that Israel will deport those who arrived in the country in search of freedom from tyranny, ethnically-based bigotry and repression exactly at the time that Jews gather to commemorate their own liberation from slavery centuries ago. Over the years, the seder has become a vital ritual which reminds each and every Jew that the quest for human dignity and freedom is ongoing: it takes various forms in different historical eras, but it is as timely today as it was 2,000 years ago. This year, it comes with a concrete mission: to prevent the state built by Jewish refugees from expelling those who seek a haven in its midst.

Attitudes towards foreigners and migrants provide, first and foremost, an especially lucid mirror of their host societies. They supply penetrating insights into how they perceive themselves and what values they hold dear. Jews know this well: they have suffered the effects of harassment, persecution, torture and even death precisely because — as outsiders — they were repeatedly at the mercy of others. That is why the question of how Israelis treat refugees is not merely technical: it is all about how they perceive their own identity.

Few issues have galvanized Israelis more lately than the debate over the future of the some 40,000 African asylum-seekers in danger of imminent deportation. In stark contrast to other issues, on which the majority of public opinion usually reflects government policy, this is not the case on matters related to the treatment of asylum-seekers. A poll conducted by Social Television last week shows that 75 percent of all respondents stated that Israel must give protection to those who face prosecution or danger in their home countries (78% in south Tel Aviv). A further 71% opposed deportation until the government processes asylum requests properly. Two-thirds of the residents of south Tel Aviv (the impoverished area where many African asylum-seekers have congregated) support plans to disperse them throughout the country and provide them with work permits until they can safely return home. In fact, 43% of residents of this disadvantaged part of Israel’s major city are willing to leave them in place (more than those in any other part of the Tel Aviv metropolitan area). Those most affected by the concentration of African migrants also appear to be the most tolerant of their plight.

The widespread support of the mostly Eritrean and Sudanese asylum-seekers has been expressed in a bevy of activity. Petitions calling for the stay of deportation orders have come from Holocaust survivors and from millennials; from professionals (including teachers, lecturers, pilots), as well as students; from national organizations and local groups throughout the country; from newcomers and veterans; from religious and secular (both in Israel and abroad); from soldiers and schoolchildren. Reams of newsprint and op-eds have been devoted to the topic; the social networks have become an arena for mobilization and interaction.

New initiatives have sprung up at an amazing pace. The ranks of volunteers in veteran and incipient organizations have swelled in recent months. Several thousand Israelis have offered to take Africans into their homes — in kibbutzim as well as major urban areas — should the need arise. Litigation against government directives has been renewed (resulting in a temporary injunction pending further discussion). New avenues of appeal have been opened — including an intriguing recourse to rabbinical courts. It seems that a variety of people throughout the country (with substantial support from Jews elsewhere) have joined together to play a part in stopping what they consider to be a policy that is antithetical to what they see as the essence of their historical legacy, cultural heritage, and belief system.

This veritable outpouring of sentiment and activity has also been manifest in the streets. Just this past Saturday night, in the second of two major rallies during the past month, more than 25,000 people gathered in Rabin Square in an impressive display of cross-generational, cross-cultural, and cross-ethnic solidarity, not only against the impending expulsion, but also in support of the rehabilitation of the dilapidated neighborhoods most severely affected by the influx of asylum-seekers in recent years. There is a sense among many diverse Israelis that it might be possible to turn the tide, to exhibit collectively and individually that basic human decency to those who have nowhere else to go.

This depends, ultimately, on the willingness of the government to heed their message. To date, however, the Netanyahu coalition is bent on expelling refugees and asylum-seekers to third countries in Africa to which they have no connection. If it cannot do so voluntarily, it intends to resort to compulsion. The authorities have worked tirelessly to rationalize this position not only in economic terms (although the departing and under-paid African workers will only be replaced by other foreign employees) but also in social terms — insisting that their primary obligation is to deal with the under-privileged groups in Tel Aviv and the periphery (despite the fact that their neglect has been going on for several generations — as the recently aired television series, “Salah: Here is the Land of Israel” so painfully depicted). Some of the statements of key government ministers reek of the worst kind of ethnocentrism and even racism.

It is not easy to explain these moves. Some may be cynically designed to divert attention from plans for urban renewal that may be carried out at the expense of the long-suffering residents of south Tel Aviv. In part they may be motivated by the political needs of those currently in power — especially Prime Minister Netanyahu, whose appearances on the ground have fomented immense discord. Unquestionably these measures have almost purposefully sown division between different groups in Israeli society. But it remains unclear how fueling xenophobia, suspicion of the other and ethnic exclusivity serves any durable Israeli interest. At the moment it is damaging its image.

At root, then, are two very different — and competing — interpretations of Israel’s being. But because in this instance, they are clashing around the matter of migration and refugees — so integral a part of the Jewish experience throughout the ages — and the balance of opinion is coming down on the side of basic human decency. This edict, so deeply entrenched in the Jewish sources and in universal conventions, has saved Jews during their darkest moments in the past and provides the key instrument to help others today.

So, let’s grant ourselves a Passover gift this year, one that gives meaning to the message of the holiday of human liberation: let us desist from deporting those fleeing atrocities and find ways to incorporate them in our midst. Perhaps that way we can better define ourselves and our guiding principles — and extend these more effectively to other contentious areas of our lives.