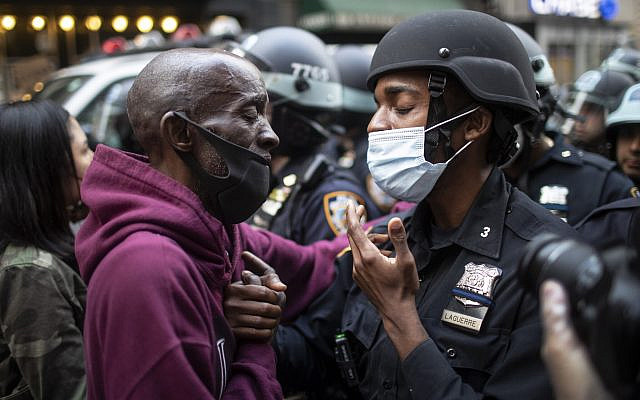 In this June 2, 2020, file photo, a protester and a police officer greet in the middle of a standoff during a solidarity rally calling for justice over the death of George Floyd in New York (AP Photo/Wong Maye-E, File)

Anti-Israel activists have made headlines by drawing a thoroughly false correlation between Israel and recent instances of police brutality in the United States. Seeking to end international law enforcement exchange programs, they actively undermine good-faith efforts to reform our country’s broken criminal justice system. If these exchanges were eliminated, police departments would not be able to learn special skills to improve policing tactics. Critics, including the ironically named “Jewish Voice for Peace” (JVP), completely ignore similar partnerships within other countries. In this instance, singling out Israel and ignoring the exact same partnerships with the likes of Germany, Greece, and Serbia is a clear act of antisemitism.

Several months ago, I attended a Zoom meeting hosted by an organization called ‘Demilitarize! From Atlanta to Palestine.” This event publicized a fictional narrative that police brutality in the United States exists because of collaboration between US and Israeli cops. This organization sought to eliminate the Georgia International Law Enforcement Exchange (GILEE), an award-winning program that brings law enforcement officers on exchange trips to Israel. They published baseless accusations against the Jewish state, including the outrageous libel that Israeli instructors teach police officers to oppress minorities. They even spread an antisemitic conspiracy theory that “Israeli tactics” were used to murder George Floyd. This is not only blatantly untrue, but a highly offensive accusation that only serves to foment hate and puts American Jews in danger.

In reality, GILEE does precisely the opposite – focusing on de-escalation tactics, and the importance of building relationships between law enforcement and the communities that they serve. Louis Dekmar, chief of the LaGrange Police Department located an hour outside Atlanta, traveled to Israel in 2004 to learn tactical defense and de-escalation skills. Unlike their American counterparts, Israeli police are taught to shoot for non-vital organs when engaging with dangerous combatants. After extensive research, Chief Dekmar brought this innovation to LaGrange and began training his officers to aim for legs and hips. By adopting this Israeli policing method, officers are able to incapacitate armed suspects while reducing the risk of death in officer-involved shootings.

Anti-Israel hate groups must stop spewing propaganda that victimizes our intergenerational struggle as black Americans. These organizations hide behind a facade of “equality” while advancing an anti-Jewish agenda. They thrive by creating a connection between our struggle, real or fabricated, as blacks in the US and the hyper-political situation in the Middle East. They oversimplify a complex conflict between two ancient and historically persecuted peoples, attempting to claim that one of them is the victim and the other the oppressor. Such groups fail to build a diverse community of oppressed voices as they make the target of their indignation not actual inequity, but Israel.

It is truly reprehensible that JVP would go to such lengths to use black Americans to attack Israel; and especially while using talking points that do not reflect the majority of our community, but a modicum of academic and political elites. GILEE is an incredible program that benefits the communities of Georgia. To oppose it would be to oppose the very people it exists for, and the very people groups like JVP claim to fight for.