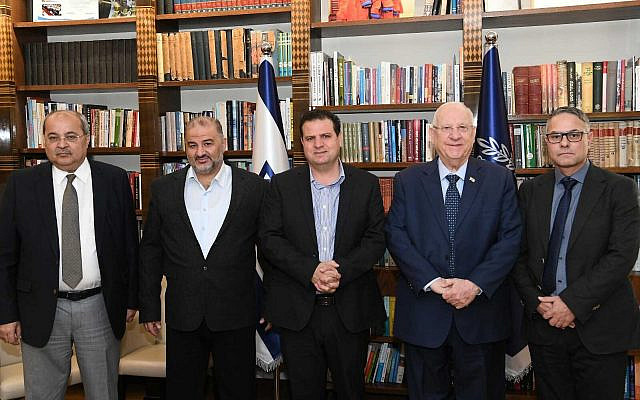 Last week was a complicated week for Israeli politics. With the announcement of the Trump-Kushner-Dermer-Freidman-Netanyahu “peace plan”—the so-called “deal of the century”– our political life here was turned upside down once again.

There was sharp criticism from the political left and the political right in Israel–it seems that some parts of the political “center” are approving of the program. One of the big surprises was the support for the whole plan by Beni Gantz, the leader of Blue and White, the main center party which is challenging the Likud to form the next government in Israel.

In expressing his support of the Trump “plan”, Gantz may be making a big mistake by alienating the other political parties which are meant to be part of his center-left coalition, including Labor-Gesher-Meretz, and the Joint List of 4 Arab Israeli political parties. which staunchly oppose much of the plan, especially “the transfer” of the Israeli Arab citizens of 10 Israeli Arab towns and villages to the so-called state of Palestine that is to be created by this plan. Indeed, this may make it almost impossible to form a center-left coalition and may force him and his party to form a center-center coalition (would he really join with Likud with Netanyahu as their leader, even though he has promised many times that he would not do this?!?)

Much of what happens here politically defies all logic. Large numbers of voters change their votes and their party affiliations, from election to election. Ideology does not seem to be holding voters much anymore. Rather, political survival—especially on the part of the Prime Minister—appears to be more important than what is best for the country.

With our convoluted system of coalition politics—based on European models and therefore very difficult for most Americans to fathom—it has become increasingly difficult to form a ruling coalition, otherwise known as a government. The major reason is personality rather than politics. This “leader” won’t sit with that leader, often for very personal issues of anger and betrayal over many years.

For example, Avigdor Lieberman, who holds the balance of power, has prevented the formation of the last two governments after the last two elections. He will not sit with the ultra-orthodox parties, nor will he sit with left-wing parties, such as Meretz, nor will he sit with Likud, as long as Netanyahu is the candidate for Prime Minister. He will only sit with Blue and White and with Likud-without-Netanyahu, which he considers “centrist” parties. Even though he is essentially a right-winger and an anti-Arab racist, his hatred of Netanyahu and his antipathy to the ultra-Orthodox political parties and their leaders—with whom he sat in previous governments—has become so strong that he would rather no government again than one with these scoundrels.

Yet, there is one issue that, in my view, defies all logic: the refusal of the so-called “Zionist” political parties to sit with the representatives of the Joint List (comprised of four Arab political parties) led by MKs Ayman Odeh and Ahmed Tibi, two seasoned, reasonable and pragmatic Israeli Arab politicians. Seventy-one years after the establishment of the state of Israel, this is an outmoded and unconscionable policy.

Israeli Arabs make up 20% of Israel’s citizens. Overwhelmingly, they are law-abiding citizens who participate actively in Israel’s democracy, at the local and national levels. They vote in large numbers in both systems of elections. They are equal before the law, although they suffer much social, educational and budgetary discrimination. They are part and parcel of Israeli society in so many ways. For example, it is impossible to imagine health care in Israel without them, or tourism, or automobile repairs, and much more.

Currently, the Joint List has 13 seats in our Knesset (Parliament). In the current election campaign, they are making strong efforts to get out the vote, and according to recent analyses in the media, there is a strong possibility that they may increase to 15 seats!

Imagine this optimistic scenario: Let’s say that the Blue and White party gets 36 seats. And the new center-left block of Labor-Gesher-Meretz gets 10 seats. That gets us to 46 seats, (inshallah, b’ezrat hashem, with God’s help). With 15 seats of the Joint List, one could get to 61 seats, which is what is needed to form a government in our Knesset of 120 seats. This would do it! And this would be the best possible scenario for a sane, responsible, fair, just government, one that will work to undue many of the injustices of the 10 year reign of Netanyahu and his extreme nationalist and ultra-orthodox partners. It might even be a government that would renew a real peace process with the Palestinians, not the phony one presented by Trump and Bibi a few days ago at the White House, which was all “fake news”. But it won’t happen! Why not, you might wonder.

Because enough politicians in the “Zionist” parties of the Center-Left, i.e. Blue and White and Labor-Gesher-Meretz (many of whom are still actually right-wingers) will still adhere to the outmoded, unfair, and unreasonable idea that Israeli Arabs can’t be part of a “Zionist” government. This is crazy, counterproductive and just plain wrong in the year 2020.

They will claim that it has something to do with the holy cow of security, implying that Palestinian Arabs of Israeli citizenship still can’t be trusted after 71 years of statehood and are somehow wrongly considered en masse as a “fifth column.” Or they will claim that since some of the elected representatives of the Joint List come from political parties that are too “extreme” or too “nationalist” that they can’t be allowed to be part of the government (as if some of the “Zionist” parties are not too extreme or too nationalist!). They can sit in the Knesset, for which they pledge to be loyal to the laws of the state and this is accepted, but not in the government!?!Or the mainstream political parties will simply not allow it because this is the way it has always been. (Irrationality often overrides rationality in Israeli politics.)

I call upon the leaders of Blue and White and Labor-Gesher-Meretz to change this policy, for the betterment of all the citizens of Israel, and for the explicit purpose of forming a government after the March 2nd elections. It is high time for this change to take place in Israel, as we enter the third decade of the 21st century. It would be in the spirit of true democracy and in the spirit of Israel’s Declaration of Independence:

THE STATE OF ISRAEL will foster the development of the country for the benefit of all its citizens; it will be based on freedom, justice and peace as envisaged by the prophets of Israel; it will ensure complete equality of social and political rights to all its inhabitants irrespective of religion, race or sex. (From Israel’s Declaration of Independence, May 14, 1948)

Now is the time to implement this vision of Israel’s founders by including Israeli Arab political parties in the government of Israel. As the famous rabbinic sage Hillel said, “If not now, when?”