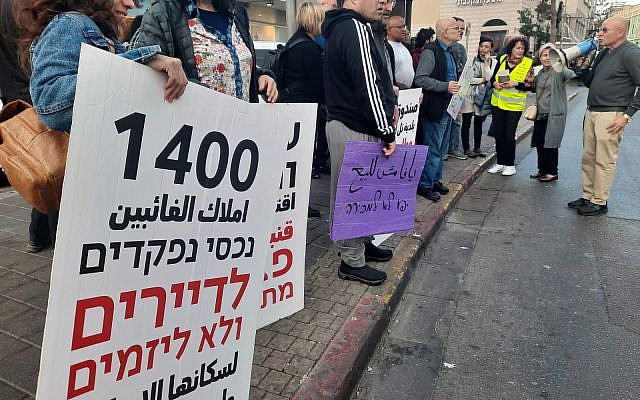 Maha, a single mother of nine from Jaffa, was evicted from the house she has lived in for decades and left on the street by none other than the Tel Aviv Municipality. That is, she was literally left out on the street with nowhere to go and no contingency plan while the city hauled off her possessions. The evicting agents – “hotza’a lapoal”  (lit, the “executors” or perhaps we should say executioners) – acting on behalf of the municipality, came in one morning without warning, took her things, pushed her out, and locked the apartment. 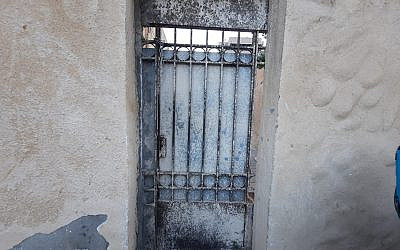 The house in Jaffa where Maha lived for decades with her children, and from which she was evicted on 18 December 2022

Maha is the first resident to be evicted out of the 1400 in Jaffa who have been served eviction papers. If nothing changes in the next few weeks, more evictions are certain to follow.

“All I want is to live in dignity,” Maha told me last week as she stood outside her home, not entirely sure where she would be sleeping that night.

I supposed we knew this was coming. Eviction notices have been received by hundreds of families over the past few months. In fact, for several years already, government officials from various offices have been threatening to evict the 1400 families in Jaffa and hundreds elsewhere. These threats are made towards those who are living in so-called “abandoned properties”. That is, the properties that were left behind by Palestinian families in 1948 and which the Israeli government simply took ownership of in 1951.

(By the way, Yair Lapid has been living in an abandoned property in Jerusalem while serving as Prime Minister. So there’s that) 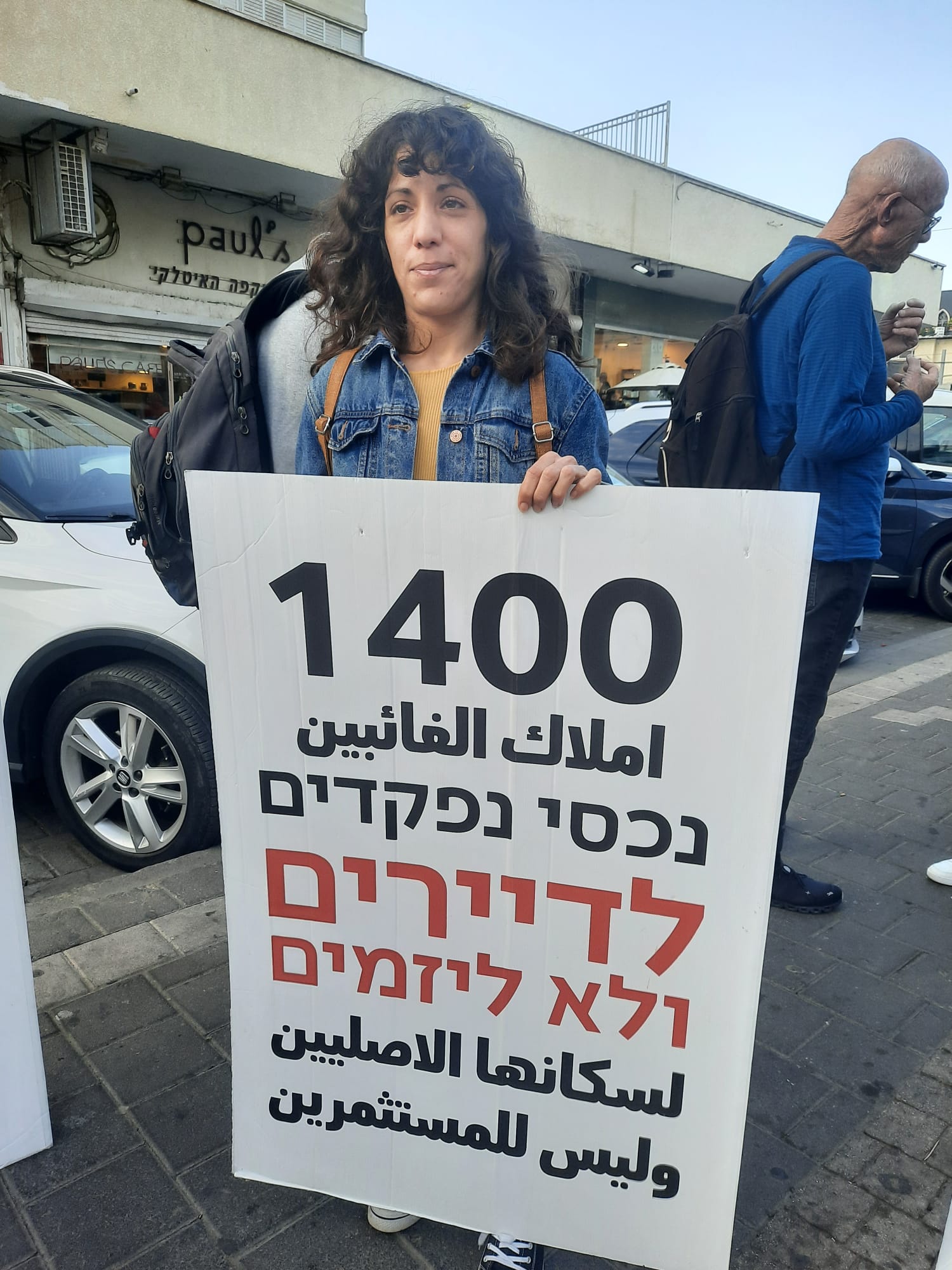 The sign at a protest against the evictions reads in Hebrew and Arabic: “1400 abandoned properties for the residents” Photo by Elana Sztokman

This story has shocking origins that have never been properly addressed. How a brand-new government can simply legislate its own power over people’s homes and properties remains a gaping question for the people with ancient ties to this land.

Astoundingly, here we are, 70 years later, and the Palestinian community is still fighting not only for justice vis a vis The State of Israel but also for the right to basic housing security. It isn’t just an old story of injustice. It is a story that continues to evolve new layers of outrageousness, in which the Israeli government inflicts pain on the most vulnerable members of the community. The State of Israel has now launched a new attack on the Palestinian residents of Yaffa, and cries of protest go unheeded.

The Arab residents of Jaffa are losing this fight. This eviction was the first cannon shot. And the other side does not have much in the way of ammunition.

The evictions are happening.

It doesn’t matter that many of these families have been working futilely to prove their family ownership.

It doesn’t matter that some of the families have been living there for decades, some since before the establishment of the state.

It doesn’t matter that some of the families have already paid millions of shekels not only in rent but also towards the purchase the properties.

It doesn’t matter that the community has been protesting, practically begging the Tel Aviv municipality and the housing authorities as well as Amidar (the group that officially manages the properties on behalf of the government) to reconsider and to find equitable solutions.

It doesn’t matter that Jaffa residents have been protesting every week for nearly two years.

None of that has had any impact. It’s like throwing pebbles at a submarine. Nobody seems to be listening. Or even notice.

The Israel Affordable Housing Center (IAHC), also known as Hagar,  has conducted extensive research on the Arab community’s housing crisis in Jaffa and has proposed several fair and reasonable solutions to this crisis, but nobody who has the power to make the changes has taken much interest.

Hagar also argues that housing security is a basic human right based on international law and that throwing people onto the street – as the municipality did to Maha – is a massive violation of human rights.

Tel Aviv municipality member Amir Badran, a lawyer who often represents Jaffa residents in trying to prove their ownership, has been negotiating with the office of Mayor Ron Huldai to find a solution. Last year, Huldai proposed The 95%  Solution – that is, to create a fund that would provide 95% of the funding for families to purchase the homes they have lived in for three generations. But since then, Huldai seems to have been ghosting Badran and the whole community. He has failed to show up to meetings that he had promised to attend – a Knesset committee meeting, a community protest, and a conference on the topic. I happened to be at all three when those present were waiting for someone from his office to do what they had promised and show up. He hasn’t. 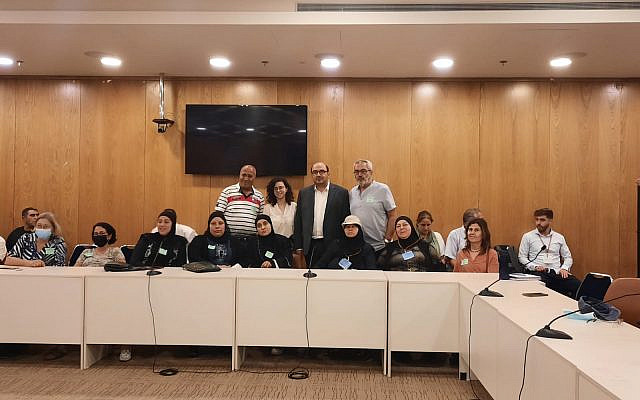 Jaffa residents facing eviction at a Knesset meeting on the subject earlier this year, on 20 June, just hours before the government collapsed. The meeting was conducted by then MK Sami Abushahedah, co-chair of the Lobby for Mixed Cities. His party is no longer in the government.
Photo by Elana Sztokman

Moreover, representatives of the Mayor’s office and the Tel Aviv municipality often claim that they are not in charge here, that it is all about Amidar and the Housing Ministry who are calling the shots. That argument went out the window last week when the Tel Aviv Municipality itself sent hotza’a lapoal to kick out Maha. So there’s that. So much for promises that the municipality is on the residents’ side.

What’s more, social services have known for many years that Maha was living in this home and that she had nowhere else to go. They know her situation – her ex-husband was an abusive gambler who left her one day, along with all their money, and a pile of debt. It was their job to help her find a solution to her woes, but they did not. Instead, they kicked her out of her home.

Maha’s situation also highlights some of the other woes of people facing eviction.

Representatives of social services have told her to go and live with one of her adult children. This is known in social services as “the family will step in” solution. But she doesn’t want to be a burden on her family. The 57-year-old rightly wants to live on her own. Her oldest daughter, for example, lives in a 1 ½ room apartment with her own husband and children. Where exactly is Maha supposed to sleep?

The city has also said that they will give her a 15,000 NIS housing allowance aimed to cover a few months’ rent. But that does not help her. She cannot rent an apartment without putting down security checks for rent and utilities, which come out to 30,000 NIS.

Another hidden barrier to people like Maha is that even if she did have 30,000 to use for a security deposit, it would not help her because she does not have a bank account.

As they say, it is very expensive to be poor.

Actually, many vulnerable people in Israel, especially single mothers, are punished for working. As soon as a person gets a job, they lose all National Insurance benefits (bituach leumi). Israel actual disincentivizes working, and makes life as difficult as possible for single mothers trying to become independent.

The story of the Yaffo evictions, which is about to heat up, exposes some of the most infuriating injustices that are taking place in Israel today.

“If we don’t receive any response,” one of the organizers said into the megaphone at Friday’s protest, “our next step will be to simply move back in.” It seems like communal squatting may be next.

There is a better way. There are solutions. But all those solutions entail someone in the municipality, the Housing Ministry, or Amidar to care about the residents. We all desperately need that.

To join the protest against forced evictions of Arab residents in Jaffa, click here.

About the Author
Dr Elana Maryles Sztokman, two-time winner of the National Jewish Book Council Award and winner of the Gourmand Award, is a Jewish feminist author, activist, educator, researcher, indie-publisher, coach, consultant, and facilitator. She is the founder of the Jewish Feminist Academy (www.jewishfeminism.org) as well as Lioness Books and Media (www.lionessbooks.com) She writes and speaks widely about culture, society, gender, and equality. She has been involved in many causes, is one of the founders of Kol Hanashim, the new women's political party in Israel, and is Vice Chair for Media and Strategy for Democrats Abroad-Israel. Follow Elana's newsletter, The Roar, for news and updates, at https://elanasztokman.substack.com/ or contact her at elana@jewfem.com
Related Topics
Related Posts
Elana Sztokman