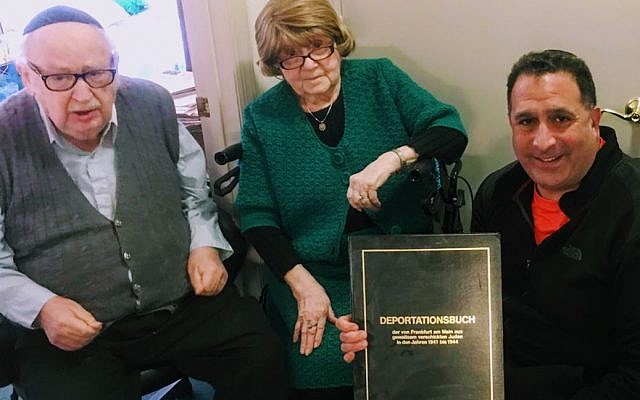 There are very few survivors still alive from the Holocaust to tell us firsthand about the near-annihilation of our people at the genocidal hands of the Nazis.

Today, I visited my Aunt Ruth (my father’s sister) and Uncle Fred in their assisted living facility.  They were so happy to welcome my wife, daughter, and I in for an overdue visit.  It took a brief moment for them to recognize us.  We embraced and then sat together talking about my dear parents that passed a few years ago and where the others in the family are at these days.  We marveled at where all the years have gone by.  It was wonderful spending this precious time with them!

Soon one thing led to another, and my Aunt Ruth started to take out some old photo albums with beautiful pictures of the family.  Together, we sat hunched over the photos of her parents (my dear grandparents), children, and grandchildren, her wedding photo (they are married 72 years), and even a newspaper picture of her with my dad being evacuated to the English countryside to avoid the German bombing blitzkrieg on London and other major metropolitan areas.  This was really meaningful to me, but there was more to come.

Next, my Uncle Freddie reached high up to the tippy-top of a tall bookcase in his small, but cozy room, and pulled down an old book.  It had accumulated years of dust, and we had to wipe it off.  The book, published by the Germans themselves, was one that I was familiar with having seen my own mother with a similar one documenting what happened to her family in the Holocaust.  It had lists and lists of Jews that had been deported by the Nazis from my uncle’s city as well as where they sent them for liquidation.

The title of the book, translated from German, reads:  “Deportation Book of Jews Forcibly Deported from Frankfurt Am Main In The Years 1941 to 1944.”  There was a place-marker in the book with the page that listed my uncle’s parents’ names and their information.  His mother was deported to Osten and his father to Majdanek concentration camp.  Their birth and death dates are meticulously noted among thousands of others.  Reading their names and holding the German’s arrogant, self-incriminating record of their murder brought tears to my eyes and anger welled up in my heart from what happened.

Before they were murdered, my uncle’s parents, Erna and Isidor, managed to save his life as well as that of his younger brother. Erna and Isidor put their two boys on a “kindertransport” (“children’s transport”) train out of Germany–Uncle Fred was just 14 then and his younger brother, Eric was only 12 years-old. Erna and Isidor’s final act with their children was to save their lives in the face of near-certain Nazi extermination.  Despite Fred and Eric being taken in by B’nai B’rith to be cared for, I always wondered how these two children carried on alone, without their parents, and never knowing if they were ever going to see them again–which they didn’t.

My own parents and their families had their own miraculous tales of survival in the face of the diabolical, evil Nazis, and I thank G-d every day for His mercy in bringing them out alive.  Today, visiting with my aunt and uncle brought all these memories–never to be forgotten–back to me and I wanted to share them with you.  I know many of you have your own incredible stories of what your families went through in the Holocaust.  Today, I am just immensely grateful to Hashem that I got to see my aunt and uncle again, hug and kiss them, and not only remember the deeply painful and tragic losses of loved ones, but also see, with G-d’s mercy, the survivors live on and flourish despite of the treacherous Nazis’ “Final Solution.”  Am Yisrael Chai!