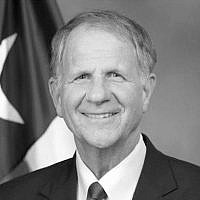 The Blogs
Ted Poe
Apply for a Blog
Advertisement
Please note that the posts on The Blogs are contributed by third parties. The opinions, facts and any media content in them are presented solely by the authors, and neither The Times of Israel nor its partners assume any responsibility for them. Please contact us in case of abuse. In case of abuse,
Report this post. 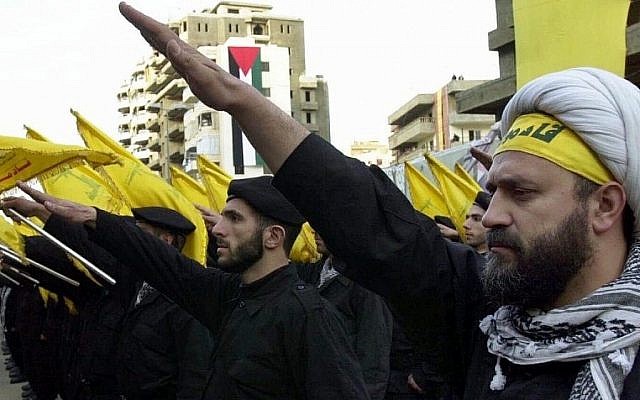 Hezbollah fighters take an oath during a parade to continue the path of resistance against Israel.

Across the Middle East today, armed thugs backed by Iran are entrenching themselves in local communities, undermining democratic aspirations, and stockpiling weapons in preparation for war against America’s allies. Sadly, it’s nothing new. For more than a decade, Iran has constructed a formidable array of foreign legions that exploit corruption and instability to subjugate millions to Tehran’s will. In response, President Trump has rightly restored sanctions on the Islamic Republic and prioritized confronting its regional activity. But to reverse the gains Iran and its proxies have made over recent years, America and its allies must go beyond sanctions.

Sanctions are designed to deny resources to Iran that are used to support terrorism, develop nuclear weapons, and conduct human rights abuses at home. We know this strategy has had some success in the past stalling Iran’s efforts and forcing Tehran to come to the bargaining table. The Obama Administration, however, gave away the farm to the Mullahs, removing many of the sanctions that brought Tehran to heel and opening the door for Russia, China, and the Europeans to do business in Iran. Obama also ceded physical territory to the Islamic Revolutionary Guard Corps (IRGC) and its proxies by not contesting their growing activity in Syria and Yemen and withdrawing U.S. forces from Iraq. The resulting instability led to ISIS’s rise and a secure land route from Tehran to Beirut from which the IRGC could move recruits and weapons to Israel’s borders. These policies of appeasement have created a powder keg that could erupt into regional war.

At a recent hearing before my subcommittee, the Coordinator for Counterterrorism at the State Department, Amb. Nathan Sales, testified that Iran spends $1 billion-per-year funding its various terrorist proxies in the Middle East. This sum pales in comparison to how much we spend to deploy forces to the region, assist allies, conduct diplomacy, and gather intelligence. Yet, Iran is gaining ground. How is this possible? For one reason: Iran’s march of terror is cheap and adaptive, using low-cost arms, violent coercion, disinformation, and crime to operate. Meanwhile, we chose to play by the rules and attempt to rebuild what Iran and other terrorists destroy. It’s far cheaper and easier to destroy than to build. And unlike our efforts during the early Cold War, in the Middle East we are attempting to build or reinforce institutions that either never existed or are plagued with corruption.

But this doesn’t mean American taxpayer dollars are spent in vain. For example, few would argue that the US’s largest foreign assistance program, $3.8 billion-per-year in military financing to Israel, is money wasted. Rather, that money ensures Israel holds a military edge over Iran and its terrorist allies thus preventing the Mullahs from ever achieving one of their core objectives: the extermination of Israel. Just weeks ago, Palestinian terrorists backed by Iran, fired dozens of rockets into Israel. One hundred and twenty of those rockets were incepted by Iron Dome, a missile defense system paid for and jointly developed through American assistance. Moreover, the Israelis are not sitting idly by as Iran masses forces on its northern borders. Since 2013, Israeli warplanes and missiles, subsidized by US taxpayers, have struck dozens of Iranian and Hezbollah convoys transporting weapons to Lebanon or the Golan Heights.

Action by Israel is effective but limited. For example, recent reports indicate the IRGC is utilizing the territory it controls in Iraq and Syria to position ballistic missiles that can target Israel, Saudi Arabia, and our forces in the region. Finding and striking these missiles is an enormous challenge for Israel and could have ramifications for Americans stationed in those countries. Instead, it is up to America to contest Iran’s grip on these arenas by empowering local actors and demonstrating American resolve.

So far, however, the State Department has done the opposite by resisting Congressional efforts to designate Iran’s most lethal Iraqi proxies, such as Asa’ib Ahl al-Haq and Harakat Hezbollah al-Nujaba, and shutting the American consulate in Basra, Iraq. Such action demonstrates to Iran that it need only threaten an American diplomatic post and the US will retreat, ceding more space for them and their proxies. Tragically in the case of Basra, we are abandoning Iraqis who courageously took to the streets to protest Iran’s meddling in their country. Simultaneously US forces in Syria are trying to prevent a war between our Kurdish and Turkish allies that has allowed ISIS to survive and Iranian weapon shipments to pass by unmolested.

Only when we tackle these local challenges can we dislodge Iran. To do so requires us to make hard choices and strategies with potentially more costs. But if countering Iran’s expansionism is truly our objective, we must show commitment to partners on the ground that we are willing to confront Iran alongside them. Until then a storm is gathering that will inevitably pull Americans back into a long and difficult war. And that’s just the way it is.

About the Author
Congressman Ted Poe, a Republican representing Texas's 2nd congressional district, serves on the House Judiciary Committee, and the Foreign Affairs Committee as Chairman of the Subcommittee on Terrorism, Nonproliferation and Trade.
Related Topics
Related Posts
Comments