David Miller has published on Electronic Intifada a piece of self-defence
You must read it. It’s such a precious sample of the culture of the Far Left. And precisely for the same reason, you really have to read it if you are Jewish.

To begin with: Miller sees himself as a champion of the fight against global Islamophobia.

Islamophobia for Miller (and for his comrades) is not, as you may guess, hostility towards the Islamic religion. Islamophobia is a five-headed worldwide conspiracy promoted by “certain States, Far-Right movements, the neoconservative, the Zionists (obviously) and the liberal New Atheists”.

These five seem to be a random collection: “the liberal New Atheists”, for example, do not support the existence of a Jewish State, which is the goal of the Zionists. However, Miller is a good Marxist, and Marxists are good at uncovering secret alliances among their enemies (Google the most famous: Stalin).

So do not try to interfere with facts and learn from David Miller. You will then realise that Islamophobia is promoted by many agencies, including the United Arab Emirates Lobby, which sponsors many British journalists: Melanie Philips for example. 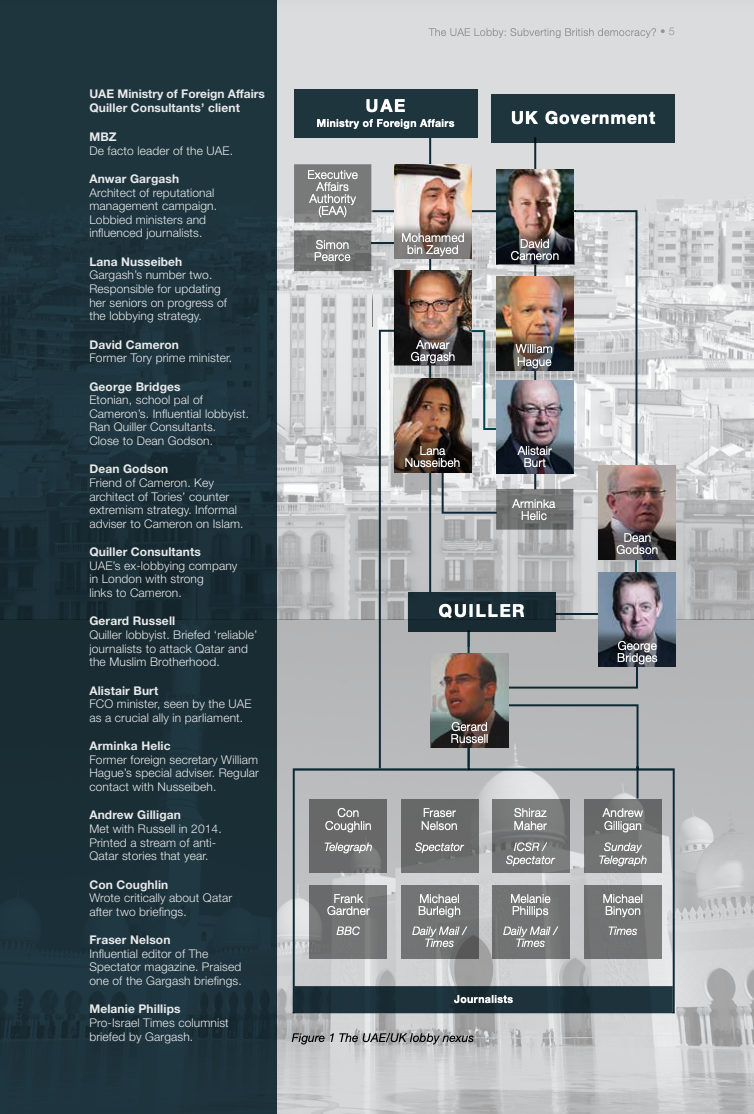 Source: https://spinwatch.org/images/Reports/Spinwatch-UAE_lobby_report.pdf.pdf [p.3]
Perhaps you thought that Melanie Philips is just personally suspicious of the Muslim community. You were wrong. Philips publishes articles that are often labeled Islamophobic because she’s on the payroll of the United Arab Emirates lobby, a Muslim State. So says professor Miller, so you have to believe.

Despite the plethora of data collected, usually from Wikipedia and/or from anonymous sources, and despite his sophisticated mapping of social networks, the worldview of David Miller is incredibly simple. Israel is evil; the rest is a consequence. Whoever stands with Israel is bad; whoever opposes Israel (or Zionism) is good. After the Abraham Accords, the Emirates have become allies of Israel; therefore, they are bad. Islamophobia is bad; therefore, it is promoted by Israel (and by its allies).

Think about this. A University lecturer teaches, with the authority that comes from his position, a series of conspiratorial nonsense, all built around the concept of how evil Israel is. An opinion about the Jewish State that, as we all know, is very common in the UK. The more you go to the Left, the more frequently and more violently you find it expressed.

For this reason, it’s time that we British Jews consider why we allow such defamation of the Jewish State, and of Zionism, taking place in British learning institutions.

A few months ago, the new Israeli ambassador in the UK received -from Jewish groups and denominations — the most hostile kind of welcome you can imagine. She was smeared as a bigoted and a fanatic. Statements of hers were taken out of context; there were talks of disinviting her from Limmud.
Is this the way we want Israel to be perceived by public opinion in the UK? As a dictatorship and a theocracy, even if they have four rounds of free elections in a few months?

A cornerstone of the fantasies of David Miller is as follows: any attempt to present Zionism as a facet of Jewish identity is part of the worldwide Islamophobic conspiracy. In his paranoid worldview, Zionism and Islamophobia are linked to each other. He’s not the only one to believe in such nonsense, and probably he’s not the only one to teach it.

How can we debunk these slanders if we ourselves have allowed the British public opinion to believe that Kahanism, Jewish fascism, is now the rule of law in the Jewish State? Yes, Netanyahu is trying to use the small Kahanist party in the same way he uses the Islamic fundamentalist party. He’s a cynical political leader (big surprise). He’s not a racist. Israel is not a racist Country. Israel is a multiethnic, pluralistic Jewish Country. We should say it more openly. If we don’t do it, who will do it in our place?

I bet that the next Israeli Government will be labeled (again) as “the most Right-Wing government in Israeli history” and that Leftist Jews in the public space will voice their meh attitude towards the largest Jewish community on Planet Earth. Because after all, why do you want to be lumped together with religiously obsessed Fascists. To those Jews, I say: well done, University lecturers can continue to disseminate their nonsense, because look! The Jews themselves say so: “Zionism and Judaism are two different things”.

As David Colier has reminded, the antisemitic teaching activity of David Miller was exposed more than ten years ago. But David Collier is smeared as a troll or a provocateur, while in reality, he is a brave researcher who takes a personal risk to explore antisemitism on the Left. The alarm was ignored then.

And why? Because we Jews don’t like to talk about the antisemitic motivations of the antiZionist.

There are people who have devoted their careers to the goal of making antiZionism acceptable to the Jewish community. They are given space on Jewish media, they write obsessively on social media, they are obviously hosted by the Guardian and the like of it. Entire organisations and outreach strategies have been built upon the assumption according which young Jews are not Zionist anymore, and we must not talk too openly of Zionism, and we must loudly criticise Israel … otherwise, young Jews will desert Jewish life.

It’s a lie, Or at least it is a gross simplification. Young Jews and Zionists in British Universities are bullied by the like of David Miller. This is the reason why they keep silent. Not because they agree with Yachad or Na’amod.

For decades we have been fed with the stories of (few) young British Jews who experience some kind of contrast between the “Jewish values” they learn at Summer camp and the reality of serving in the Israeli Army. And we have been obsessively told about the “difficult questions” (always the same) that these youth (always few, always the same) raise. Those who have built their career in the Jewish institutions upon this narrative must feel happy now. You ask difficult questions, the like of David Miller provide the answers.

Many of those who posture themselves as moral authorities in such a way are fond of reminding that there is Islamophobia in the Tory Party as if this was an excuse for the dangerous antisemitism of the Far Left. Perhaps it’s time for you on the Far Left, you who have worked so hard for all these years to widen the gap between British and Israeli Jews, to ask for once a question: are there more supporters of the racist Tommy Robinson in the Tory Party or of the antisemite David Miller in the Far Left?

Of course, this is not the kind of question you want to ask.

But never mind, we, the rest of British Jewry, know the answer, and we also know why you prefer to talk about something else.