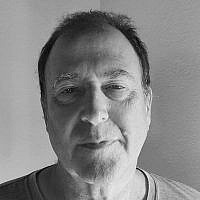 The Blogs
Michael Kretzmer
Apply for a Blog
Advertisement
Please note that the posts on The Blogs are contributed by third parties. The opinions, facts and any media content in them are presented solely by the authors, and neither The Times of Israel nor its partners assume any responsibility for them. Please contact us in case of abuse. In case of abuse,
Report this post.
For the last three years my life has been entirely absorbed in the making of a documentary film that attempts to tell the truth about the Lithuanian holocaust. This has been a terrible task, an entirely unwanted one, and one that has exacted a significant personal price. Many times I have bitterly regretted taking it on, but once started there could be no turning back: the injustice of what happened to our people, and even more importantly, what is happening today in Lithuania, cannot be ignored.
The most painful task was the journalistic duty to forensically research and report the depraved cruelty of our persecution. Nothing can prepare you for the incomprehensible, sordid detail: the celebratory murder of children in front of parents; the delicate physics of smashing babies’ skulls against trees (thousands of them); the horror carnival of small, terrified girls being loaded onto trucks for deadly rape parties by Lithuanian gangs; the imprisonment of thousands of Jews in their own synagogues and their slow murder either by fire or by starvation and thirst amidst human filth and the stench of their loved ones’ rotting bodies; the beheadings, the immolations, the thousands of deadly humiliations; the destruction of this dazzling 600-year-old civilization – 220,000 Jews slaughtered, the highest murder rate in all of Holocaust Europe; and above all, the thought of our depraved Lithuanian tormenters laughing at our pain and humiliation. And the knowledge that the Lithuanian government is still, politely, laughing at us today.
I am a journalist and film-maker by profession but for months I struggled to find the narrative voice that could tell this terrible story. And one day I found that voice. It was obvious, the only voice that matters. The voice of the murdered. This is why I have called my film: J’Accuse! It is their cry for justice from the killing pits of Lithuania.
Well, I have come to the end of this road, thank G-d. I have made the film and to my delight it will reach the world. J’Accuse! will receive its world premiere this November at the prestigious Jewish International Film Festival in Melbourne and Sydney. Other showings are already planned across the world, including London, Israel, South Africa and the USA.
There is much more to say, not least about the bizarre and profoundly disappointing participation of ‘important’ Jews and Jewish organizations in this ongoing pogrom of holocaust denial (please imagine if Germany set up a bogus historical institute to make up lies in order to rehabilitate Eichmann as a national hero – would we ignore this and accept their baubles, trinkets, awards, invitations, stipends, gifts, faux smiles and favors? Probably, I am sad to say).
For now I will only say this: the civilized world must not allow Lithuania to get away with this outrage. The Lithuanian government’s disgusting practice of manufacturing lies in order to defend and hero worship the rapists, torturers and mass murderers of entirely innocent Jews is unforgivable. If this is permitted, then the holocaust has become meaningless. It is an existentially important issue for Europe, and the world.
It is time to fight back.
https://www.classiccinemas.com.au/movies/jiff-jaccuse
About the Author
Bulawayo born, a former travel writer for the Sunday Times and director/producer for the BBC and other once important media organisations, a keeper of chickens and grower of fruit and veg, a student of Torah, a Husband, Dad and Grandad of the greatest kid that was ever born...and a man determined to fight for justice in Lithuania.
Related Topics
Related Posts