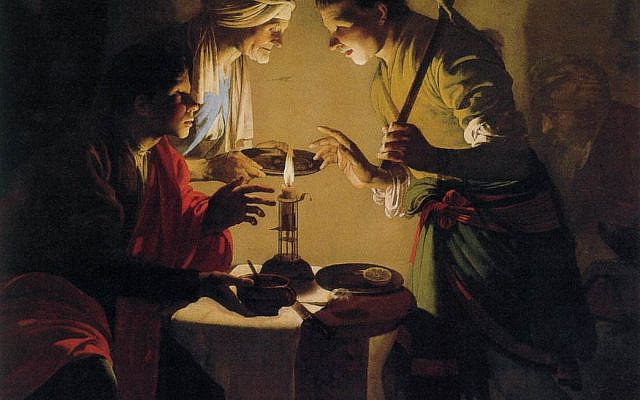 And these are the chronicles of Isaac… (Genesis 25:19)

So Esau went unto Ishmael, and took unto the wives that he had Mahalath the daughter of Ishmael Abraham’s son, the sister of Nebaioth, to be his wife. (Genesis 28:9)

This Torah portion is called Toledot. In Hebrew, Toledot means “generations” or “chronicles.” Indeed, this Torah portion starts with the phrase, “These are the chronicles of Isaac…” This is not the first or the last time this word appears in Tanakh (The Hebrew Scriptures). The first time it appears in the opening verse of chapter 2 of Genesis:

These are the chronicles of the heaven and of the earth when they were created, in the day that the Eternal God made earth and heaven. (Genesis 2:4)

The second time it appears in the Torah section of Noah:

These are the chronicles of Noah. (Genesis 6:9)

The last time it appears at the end of the Book of Ruth:

What is the connection between these verses? The first and last verses frame the history of the world. “The chronicles of the heaven and of the earth” speak of the Creation of the world and the purpose thereof. “The chronicles of Perez” speak of Mashiach ben David (the Messiah, the son of David)—the realization of the purpose of the Creation. But there is more here than meets the eye.

Towards the end of the nineteenth century, classical physics was fully developed. The Newtonian mechanics described the movement of bodies and forces acting on them. The universal law of gravity, also formulated by Isaac Newton, predicted planetary orbits. Classical electrodynamics developed by James Clerk Maxwell described the magnetic and electrical fields and forces, as well as light and other electromagnetic waves. Thermodynamics developed by Ludwig Boltzmann and others[1] described the behavior of gases and liquids and the transfer of heat. Physics described the universe with beautiful predictability and amazing precisions. Physics seemed to be complete. In his speech in 1900, British physicist Lord Kelvin proclaimed that physics was fully developed, and there were only two little “clouds” left to be cleared before the edifice of physics was complete.

Each of these “two little clouds” turned out to be the limits of classical physics. Their resolution led to a profound revolution in physics. The first cloud was the ultraviolet catastrophe. Its resolution led to the development of black body radiation theory by Max Planck, which was the beginning of the quantum revolution. The other cloud was the Michelson-Morley experiment that failed to detect the luminous ether. The resolution of this cloud by Albert Einstein led to the special (and later, general) theory of relativity.

These two revolutions upended all areas of physics. Classical mechanics gave way to relativistic mechanics (based on the special theory of relativity) for bodies moving with high velocities or quantum mechanics for subatomic particles. The universal law of gravity of Newton was replaced by the general theory of relativity of Einstein. Classical electrodynamics was replaced by quantum electrodynamics. All, but one, that is. One theory remained intact—thermodynamics survived all the scientific revolutions of the twentieth century unscathed.

However, recently, another view emerged. Perhaps thermodynamics was not affected by the quantum and relativistic revolutions because this theory is more fundamental than either quantum mechanics or relativity theory. Efforts are underway to derive the general theory of relativity and quantum mechanics from thermodynamics. One reason for this intuition is the thermodynamical quantity called entropy, which is closely related to energy and information.

Entropy is a measure of disorder, of chaos. The second law of thermodynamics famously states that in an isolated system, entropy always increases with time. Some view this law as the reason for the arrow of time—time always flows in the direction of the entropy increase.[2] The second law of thermodynamics is the reason behind universal decay, and entropy is the measure of that decay.[3]

The expression “the chronicles of” means the evolution in time. The Chronicles of the Creation of the heavens and the earth is the detailed account of biblical cosmogeny—how the world was created during the Six Days of Creation. The Chronicles of Noah is the account of the flood that happened in Noah’s lifetime and the evolution of Noah’s family—his children and grandchildren. And the same is true of the Chronicles of Isaac. The direction of such evolution—the arrow of time—is the result, as some argue, of universal decay, as manifested by the increase in entropy.

Now the earth was unformed and void… (Genesis 1:2)

According to the Lurianic doctrine of shevirat hakelim (“the breaking of the vessels”), the vessels of the Universe of Tohu shattered and fell into the universe of Tikkun, where they await their rectification—this is the story implied in the first chapter of Genesis. The chronicles of the heavens and of the earth told in the second chapter of Genesis is the story of Paradise and the primordial sin—the story of the absolute order and perfection before the sin, followed by chaos and decay, in the wake of the sin, which mixed good and evil together. The primordial sin brought death as an inevitable result of decay. Cosmology predicts the so-called heat death of the universe when, in the distant future, all parts of the universe will reach thermal equilibrium, at which point entropy will reach its maximum value and the music will stop. Entropy, as the measure of decay, is seen in this light as associated with death, destruction, and evil.

The story of the flood told in the Torah section of Noah is a reenactment of the story of Creation. And, once again, it is the struggle between order and chaos, between Tikkun and Tohu. The raging waters of the flood represent chaos, the universe of Tohu. The idyllic peace inside the Ark is a microcosm representing the universe of Tikkun. As we discussed in “Noah’s Ark—a Model of a Living Cell,” the Ark’s struggle to stay afloat in the raging waters of the flood is a metaphor for a living cell laboring with its metabolism to maintain homeostasis by reducing entropy inside at the expense of increasing entropy outside. This all will become significant later on.

Now come the chronicles of Isaac. Isaac had two sons, Esau and Jacob. Kabbalists tell us that Esau’s soul was rooted in the universe of Tohu, whereas the soul of Jacob was rooted in the universe of Tikkun.[4] This dichotomy is reflected in their characters: “And Esau was a cunning hunter, a man of the field; and Jacob was a quiet man, dwelling in tents.” (Genesis 25:27) The ensuing struggle between Jacob and Esau can be seen as the struggle between Tohu and Tikkun, chaos and order, as chaos always seeks to destroy the order and vice versa.

We first see this in the story of Esau selling his birthright to Jacob:

Birthright is a privilege that belongs to the first-born son. It is a direct consequence of order—the first son gets it, while the second and subsequent sons do not. This is why the birthright was so important to Jacob. Being rooted in the universe of Tikkun, he was all about order. It was vital for him to be recognized as the first because any order begins with the first. Moreover, Jacob’s soul originated in the word of Atzilut—the first world in the Universe of Tikkun.

Conversely, Esau could not care less about his birthright. Being rooted in the universe of Tohu, chaos was in his nature; order was foreign to him. He, therefore, “despised his birthright,” as he despised all order.

Kabbalists tell us that Isaac knew that Esau’s soul originated in the universe of Tohu. He also knew that the souls of Tohu have tremendous power. The energy of Tohu is like nuclear energy—it can light up cities, if properly harnessed, or destroy cities, if used in nuclear bombs. Isaac loved Esau because he saw this great potential in him and wanted to harness this potential.[5] However, Rebecca knew better. She was told by God that “the elder shall serve the younger,”[6] the birthright and the father’s blessing rightfully belonged to Jacob. The shards of the vessels of Tohu that fell into the universe of Tikkun had to be rectified first. Esau’s time would not come until the end of days.

But why did Jacob need to steal his father’s blessing? Let us recall that Jacob’s struggle with Esau is parallel to the struggle by Noah’s Ark to keep afloat in the turbulent waters of the flood, which in turn is parallel to a living cell struggling to maintain its internal homeostasis fighting the increase in entropy—decay. A living cell must exert energy to decrease entropy. Entropy is the flow of time, decay, and ultimately, death. Any form of life must steal time from death and decay to live. Jacob had to do the same thing.

The relationship between the two brothers is the dynamic of the struggle between Tikkun and Tohu, order and chaos, life and death.

As we said earlier, entropy, as the measure of decay that ultimately leads to death, is associated with evil, because death is the direct consequence of the primordial sin. With this understanding, we can see an incredible hint contained in the last verse of this Torah portion, as elucidated by Rashi. The Torah says:

And Esau saw that the daughters of Canaan pleased not Isaac his father; so Esau went unto Ishmael, and took unto the wives that he had Mahalath the daughter of Ishmael Abraham’s son, the sister of Nebaioth, to be his wife. (Genesis 28:8-9)

As the Torah makes clear, Esau did not divorce his Canaanite wives but took an additional wife—daughter of Ishmael. Citing Genesis Rabbah 67:13, Rashi explains, “He added wickedness upon his wickedness, for he did not divorce the first ones.” Recall that Esau is rooted in the universe of Tohu (Chaos), and that entropy is the measure of chaos associated with wickedness. Therefore, this verse can be interpreted as “he added chaos upon chaos and his entropy increased.” Is this not a hint at the Second Law of Thermodynamics, according to which entropy must always increase?

Wickedness will cease to exist at the end of days, with the coming of the Messiah, and so will death. Entropy will stop increasing, although the flow of time will not cease. This is why the last appearance of the expression, “these are the chronicles…” in the Scriptures refers to the birth of David, forefather of the Messiah:

[3] From the point of view of statistical mechanics that links quantum mechanics to thermodynamics, entropy is the number of microstates in which the system could be arranged. The Second Law of Thermodynamics follows automatically from this definitions—since there many more random microstates than special microstates, it is more probable that in the next moment the system will assume a random microstate—hence the tendency of an isolated system to evolve towards an increase in randomness (disorder) and the resultant increase of entropy with time.