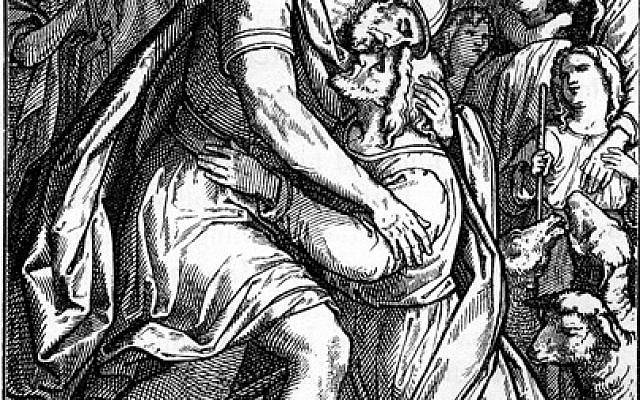 We know that many of the characters in the Tanach are flawed personalities, it is one of the reasons why the text has resonated with readers throughout history. They make mistakes, get things wrong, act unjustly or even unfairly at times. Less well known though is that the ancient Jewish interpretative tradition, although it often erases these faults, or engages in unlikely apologetics, is just as happy, at times, to highlight or exaggerate them. The hapless biblical hero, whom we instinctively imagine to be a paradigm of saintliness and sanctity, finds themselves used instead as a salutary example of how not to behave; they become at best a nebbish, at worst unsavoury.

The Midrashic treatment of Jacob’s preparation to meet his brother Esau is one such example. When they last met, over twenty years earlier, Esau was vowing to kill the brother who had deceived their father and stolen his blessing. Jacob’s parents sent him away, to his uncle’s home, out of Esau’s reach, hoping the matter would be forgotten. Now, twenty years later Jacob is on his way home, and he is naturally terrified of what will happen when he encounters his brother.

The Midrash however does not think Jacob is justified in being frightened. Twenty years earlier, when he left home, Jacob dreamt of a ladder reaching to heaven, at the top of which stood God. God made him a promise at that time, that he would protect and care for him, returning him home safely at the appointed time. Jacob’s fear of Esau is, the Midrash thinks, an indication of his lack of faith. Not only that but, it tells us, Jacob’s descendants at the time of Esther and Mordechai excuse their own terror of Haman by adducing Jacob’s fear. The flaw in Jacob’s character has echoed down through the ages.

In a similar way the Midrash rebukes Jacob when he sends messengers ahead of him to try to appease Esau. It quotes the Proverb (27, 17) ‘A passer-by who meddles in a quarrel not their own is like one who takes a dog by the ears.’ It draws a parallel with a young man who passes by a crossroads and sees a violent bandit asleep. He wakes him up, to tell him that he is sleeping in a dangerous place. The bandit, of course, is furious at being woken and attacks him. The Midrash applies this to Jacob, telling him: Esau was getting on with his life, had forgotten all about you, and you suddenly send messengers reminding him of your existence. Are you surprised that he is hostile?

Jacob is also criticised for the self-deprecating language he uses towards Esau. The Midrash identifies eight moments in the confrontation when Jacob refers to Esau as ‘My lord’. “By your life”, says God in the Midrash, “you have demeaned yourself eight times; I will raise up for him eight generations of kings before your descendants even have one.”

None of these criticisms of Jacob are apparent in a plain reading of the text, which seems to suggest that when returning home Jacob has no choice but to appease Esau in whatever way he can. Esau has not revoked his vow to kill Jacob and Jacob, travelling with a large family and little protection, cannot afford to provoke a brother who has established himself as the head of a powerful desert tribe.

But these Midrashic comments are deliberately intended to provoke us into reading the narrative in a different way from its plain meaning. Almost uniquely in world literature Midrash has the ability to ignore the general thrust of a narrative and to zoom in instead on single words or phrases so as to draw out ideas that are often unrelated to the story being told. We can see from the plain meaning of the text that Jacob needs to appease Esau. What we see less clearly are the mistakes people are prone to make at moments of stress or great danger, and the potential consequences of those errors. We don’t have to take Midrash literally, but it is always worth asking what lessons it is trying to draw out from its microscopic examination of the text.