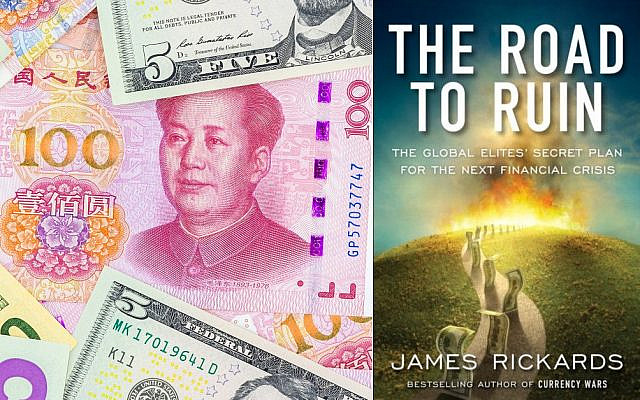 The transition our civilization is undergoing constitutes a multidimensional process unfolding in many different aspects at the same time. In order for us to better understand it, an interdisciplinary approach is necessary.

The economic dimension of the change produces ethical problems and theosophical insights. Since the dominant views of society are materialistic, the “struggle for survival” powerfully influences the substance of the karma that is accumulated.

Conventional economists are often short-sighted. Best-selling author James Rickards helps unmask the illusory world of present-day Economics, as demonstrated by these fragments from his book “The Road to Ruin”:

* …Elites live in bubbles beside other elites. They are often the last to know a crisis is imminent. (p. 4)

* Is economics science? Yes, and there the problems begin. Economics is a science, yet most economists are not scientists. Economists act like politicians, priests, or propagandists. They ignore evidence that does not fit their paradigms. Economists want scientific prestige without the rigor. Today’s weak world growth can be traced to this imposture. (p. 5)

* Still, most academic economists are not scientists; they are dogmatists. They cling to an old version of their science, are not open to new views, and discard data that contradict dogma. (p. 5)

* With a financial system so vulnerable, and policymakers so unprepared, extreme policy measures will be needed when catastrophe strikes. (p. 6)

* Churchill once sent a cable to Keynes that read, “Am coming around to your point of view.” Keynes replied, “Sorry to hear it. Have started to change my mind.” It would be refreshing if today’s economists were half so open-minded. (p. 7)

* Belief systems are comforting. They offer certainty in an uncertain world. For humans, certainty has value even if it is false. Falsity may have long-run consequences, yet comfort helps you make through the day. (p. 8)

* [The] comfort factor becomes embedded when there is mathematical modelling to support it. Modern financial math is daunting. Ph.D.s who spent years mastering the math have a vested interest in maintaining a façade. The math bolsters their credentials and excludes others less fluent with Ito’s calculus. Financial math is also what practitioners call elegant. If you accept the modern finance paradigm, the math provides a wealth of neat solutions to difficult problems (…). No one stops to question the paradigm. (pp. 8-9)

* This financial façade is reinforced by the tyranny of academic advancement. A young scholar in a highly selective finance program is rightly concerned with fellowships, publication, and faculty appointment. Approaching a sexagenarian thesis adviser with an abstract that refutes what the adviser has held dear for decades is not an astute career move. (p. 9)

* Then there is simple inertia, like staying in a warm bed on a cold morning. Academics have their comfort zones too. New knowledge is like a dive in the surf in winter – bracing, exhilarating, but not everyone’s cup of tea. (p. 9)

* The preference for certainty over uncertainty, the allure of elegant mathematics, the close-minded academic mentality, and inertia are good explanations for why flawed paradigms persist. (p. 9) [1]

James Rickards’ ideas are clear. In esoteric philosophy, blind inertia, or Tamas, is an obstacle to the search for truth. Helena Blavatsky quotes Sargeant Cox in “Isis Unveiled”:

“There is no more fatal fallacy than that the truth will prevail by its own force, that it has only to be seen to be embraced. In fact the desire for the actual truth exists in very few minds, and the capacity to discern it in fewer still. When men say that they are seeking the truth, they mean that they are looking for evidence to support some prejudice or prepossession. Their beliefs are moulded to their wishes.” [2]

While studying the paradoxes of our money-centered society, James Rickards keeps a broad-minded attitude regarding the systematic denial of facts, on the part of many. And he says:

“If academic reputations were the only stakes, the world could be patient. Good science wins in the end. Still, the stakes are higher. The world’s wealth is at risk. When wealth is destroyed, social unrest follows.” [3]

“The crucial question in economics today is whether capital markets are complex systems. If the answer is yes, then every equilibrium model used in financial economics is obsolete.” [4]

As to the end of the old financial and monetary system, Rickards announced:

“The next crisis will come before the current easing cycle has been reversed. Central banks will be defenseless except through the use of massive new quantitative easing programs. This new money creation binge will test the outer limits of confidence in central bank money.”

“In addition to this list of catalysts from gold, debt, deflation, and default, there are exogenous threats that emerge in geopolitical space and spill over quickly into financial panics. These threats include conventional wars, cyberwars, assassinations, prominent suicides, power grid outages, and terror attacks.”

The karma of this civilization is the karma of a strong attachment to materiality. The complex crisis started in 2020 initially presented itself as a pandemic. Its economic aspects, however, play a decisive role.

James Rickards used in 2016 the process of a pandemic as an image and metaphor to describe the worldwide financial transmutation which he considered unavoidable:

“Risk managers and regulators use the word ‘contagion’ to describe the dynamics of financial panic. Contagion is more than a metaphor. Contagious diseases such as Ebola spread in the same exponential way as (…) chain-reactions, and financial panics. One Ebola victim may infect two healthy people, then those two newly infected persons each infect two others, and so on. Eventually a pandemic results, and a strict quarantine is needed until a vaccine is found. (…)”

“In a financial panic, printing money is a vaccine. If the vaccine proves ineffective, the only solution is quarantine. This means closing banks, exchanges, and money market funds, shutting down ATMs, and ordering asset managers not to sell securities.”  (p. 24)

What do theosophists have to say about the art of navigating in such a complex karmic situation?

Honesty, ethics and discernment are needed in the way crises are managed, so that we build a healthy transition to a sustainable economy and sane society.

Dangers use to bring about sacred opportunities. Good will produces positive karma. The strength of sincerity (individual and collective) can be enough to avoid unnecessary confusion.

Into the extent that there is common sense, or in other words as far as the feeling of respect for life is dominant, the practice of brotherly cooperation prevails, and paves the way to the victory of all.
___

An initial version of the above article was published in the April edition of “The Aquarian Theosophist”, pp. 2-5, under the title of “Good Faith in the Battle of 2020”.

See the texts “The First Step in Healing”, “Doing What Depends on Us” and “The World War in Our Minds”.  Take a look at “Israel, the Old New Land”.
___