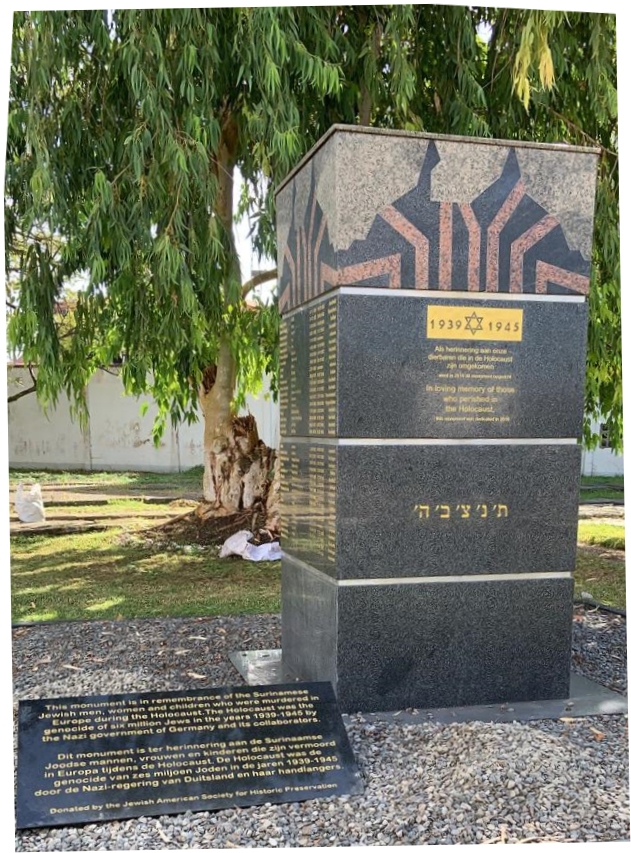 2015, in distant and remote Suriname, a tiny third world country on the northern coast of South America, the Jewish American Society for Historic Preservation was offered the opportunity to provide the key funding for their creation of the Holocaust Memorial placed in Paramaribo, Suriname.  JASHP did, without hesitation.

The 350-year-old Jewish community of Suriname was decimated when large numbers of their members were caught in Holland during the Holocaust.  2016, the Memorial was dedicated at the magnificent, historic Neveh Shalom synagogue.

The dedication of the Memorial was attended by representatives of many faiths in Suriname, Jewish, Christian, and Muslim.

But…there was an underlying problem, an assumption of understanding was made when the Memorial was placed.  The assumption was that the many cultural tourists coming to see the synagogue with its sand-covered floor would know what the Holocaust was.

It is now well documented; the word Holocaust is diminishing. Today, over 40% of Americans, including Jewish Americans, never heard of Auschwitz.  Far fewer know or believe that 6,000,000 Jews were murdered by Nazi Germany and their allied collaborators. 6,000,000, individual men, women, and children is simply a number that is incomprehensible.

It is not P.C., truthfully, around the world, knowledge or willingness to know about the Holocaust is getting worse.  After 75 years, the Holocaust is receding into the deep, darkness of deliberate historical forgetfulness despite all the museums, books and documentaries that have been created.

January 27, 2020, for one shining day of light, many in the world, all with solemn pomp and circumstance, will intone the proper words of memory.

But…what about January 28? What about the day after?

Since January 28, 1945, world Rabbinic leadership has refused to include even a single halachically mandated sentence to Jewish liturgy for permanent Holocaust memory.

Several months ago, JASHP approached the tiny Suriname community with a proposal. To go along with Cemetery restoration funds and other support, JASHP would like to add a simple Holocaust interpretive stone adjacent to the Memorial.

The community considered the offer.  The proffered, very needed funds would have been given anyway. JASHP explained that many people coming to Neveh Shalom did not know what the Holocaust was.  The community considered and accepted the offer. They wanted the interpretive marker.  For the rapidly approaching future, a permanent stone marker telling what the Holocaust was, was very needed.

The stone marker was created, black granite with gold carved lettering.  The marker will be formally dedicated Jan. 27.

On January 28, in Suriname, the Memorial to the murdered Jews will have understanding for many, many years into the future.

The 42 words of text are written in English and Dutch.

“This monument is in remembrance to the Surinamese Jewish men, women and children who were murdered in the Holocaust. The Holocaust was the murder of six million Jews in the years of 1939-1945 by the Nazi government of Germany and its collaborators.”

Months ago, JASHP extended its responsibility of memory for tomorrow by initiating a global effort.  Of the 6,000,000 Jewish victims of the Holocaust, 1,500,00 were the innocent of the innocent, children. Globally, children are always the victims of adult hatred, bigotry and ignorance. Their today’s will be our tomorrows, when we are old and gray.

Anne Frank was a fifteen-year-old child victim of the ancient hatred.  Yet, despite all, she remained an idealist. She wrote in her famous post-war discovered and published diary,

“In spite of everything, I still believe that people are really good at heart.”

With a child’s faith and an elderly’s wisdom, Anne chose to look to redemption through good not evil, love not hate.

JASHP has undertaken and is funding a global initiative to appropriately place a sculpture created by noted Israeli artist Sam Philipe, themed on Anne Frank’s Holocaust story, wherever we can.

The sculpture is entitled the Anne Frank Children’s Human Rights Memorial.  A Holocaust interpretive stone marker will be near every Anne. 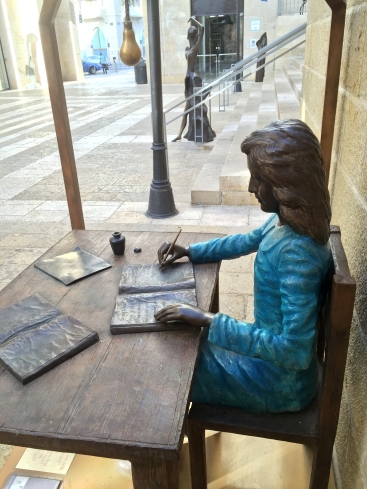 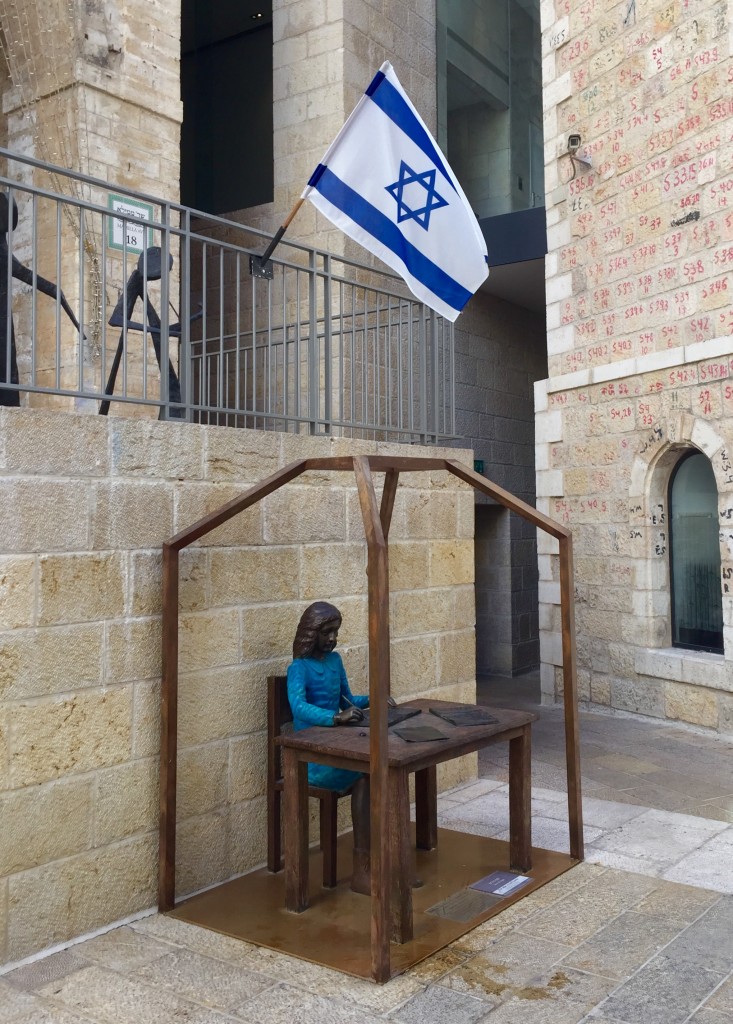 Two Anne Franks have been placed in Israel.  One is being placed in Guatemala.  We are in process trying to place Annes in Ethiopia, Ireland, Japan, and the United States. Over the years ahead, JASHP will continue to remember the darkness through future Anne placements, the little girl in the Amsterdam attic who died in Bergen Belsen.  We will focus on the hope, for all children, by not forgetting the past.

Will our choice be successful?  Maybe yes, maybe not…  We do not want absolution tomorrow from not doing what we should be doing today…

Each of us will have to make our own choices on January 28.

About the Author
Jerry is the president and founder of the Jewish American Society for Historic Preservation, www.JASHP.org. He is the son of Survivors of Buchenwald and Bergen Belsen. He is a former Yeshivah student and served with the IDF in the Sinai. He is the author of over 100 articles in publications ranging from the Jerusalem Post to the Prairie Connection to the San Diego Jewish World. Jerry is frequently interviewed on T.V. and Radio about the American Jewish experience. The Jewish American Society for Historic Preservation has completed projects in 37 US. States and in 5 countries. Over 7,000,000 people annually benefit from one of JASHP's projects. JASHP has completed seven projects in Israel. Most recently, the first ever historic memorial to the Exodus in Israel, July 2017. The Exodus was known as the "Ship that Launched a Nation". December 2017, the Machal Memorial in Jerusalem to the 5,000 Jewish and non-Jewish volunteers who came to Israel when they needed her most during the War of Independence.
Related Topics
Related Posts
Comments