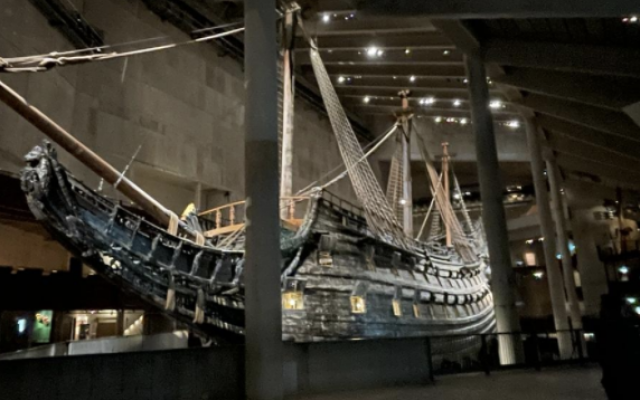 The "Vasa" preserved at the Vasa Museum (taken by the author)

Our “Israel Winter Weather Group” has been a buzz for the last week or so.  This all happened went I went in search of snow, after arriving in Stockholm as part of the F10 Global incubator/accelerator.  While I did get to see a very old ship that sunk within a 100 meters or so of its launch, I didn’t find any snow, and now I’ve given up and am planning to board a flight, soon,  back to Israel.  Folks say:  it’s just not cold up here (about 28 degrees North of Israel) like it used to be.

Yet, the members of our group, Yaakov Cantor, Jonathan Hoffman, and I,  are  excited.  Why? Because certain changes are afoot in the atmosphere that could lead to about a 10 day period of unusually cold at the end of January and early February.  This cold weather  might bring us our (hoped for winter) snow.

We don’t actually see the extreme cold yet, but we see the precursors that are often followed a couple weeks later by a strong ridge of (relatively warm) high pressure in western Europe and a deep trough of (relatively cold) low pressure in the eastern Mediterranean.

We’ve actually been fortunate up to now.  Generally, atmospheric conditions would have led to an extended period of dry and warmer weather, but a stronger southern Jet stream (associated with anomalous ocean heating) has led to generally overcast conditions with frequent showers.

The expected important change is a continued transition from negative North Atlantic Oscillation to positive values, offen associated with cold conditions over the poles.  This keeps the really cold air from flowing into north America, leaving it to possibly some day (i.e., near the end of January) makes its way to us.

While there just may be plenty of argument whether it will snow or not, there is definitely quite a controversy over the proposed changes to the ability of the Supreme Court to override laws that are not consistent with the Basic Laws of Israel.  The efforts to remake the judicial branch would be comical if not so serious.

Think of it this way:  The Likud and its allies are using its parliamentary majority to turn criminals into law abiding citizens.   At the same time, they are passing a law to eliminate any oversight of the Knesset, which means that Israel will transition to an autocracy like Turkey and Russia.  But, what makes it especially galling is that they are passing a law to do so.  I mean why bother?  If the new law says that a bare 61 Knesset (minimum majority) can overturn any law, then there is not any oversight at all — since this is the minimum number to form a majority.  The government should just pass any laws it wants to,  ignore the court, stop pretending that these are  necessarily “lawful” actions.  Pretense is important, but it’s not everything.

Quite simply, something doesn’t become legal (or really morally right) just because a law is passed.  What is the purpose of the law, but to protect its citizens from arbitrary government actions?  When no such protections exist then we move towards a situation quite the opposite: where it was legal to murder Jews in Nazi Germany.  Moreover, assuming that the government doesn’t next outlaw all opposition parties, which they might, a future change in government could restore the previous court override conditions, and also restore the previous conditions and ask the court to rule that parties that do not accept a separation of powers (the essence of Democracy) can no longer run in elections.  Where would that leave the current members of the government?  Left out.

If reform is needed or desired, it should be done in conjunction with the opposition parties, and there should be much  higher number than a simple majority (e.g., 2/3) of Knesset members who agree to override the court.

The rest would just be commentary, if the implications of these changes were not so dire, like the legality of criticizing the government in the future in a blog such as this.  So, I’m choosing to write this now, rather than waiting for that day to come.

About the Author
Dr. Barry Lynn has a PhD in Environmental and Atmospheric Sciences. He has an undergraduate degree in Biology. He is a researcher/lecturer at the Hebrew University of Jerusalem, and is the CTO of Weather It Is, LTD, a weather forecasting and consulting company.
Related Topics
Related Posts
Barry Lynn