For those of us who have been fluent for some time, it is easy to become complacent about how remarkable Hebrew is. For those do not know the language, it is difficult to fully grasp Hebrew’s intriguing linguistic and profound spiritual dimensions. Jeremy Benstein has written a book that highlights Israel’s extraordinary semantic heritage for both cohorts. Now it would normally be a fair assumption that an entire book about Hebrew linguistics would be dull and dreary experience. In fact, the newly published Hebrew Roots, Jewish Routes – a Tribal Language in a Global World is anything but. It is fun to read; it is profound. It is edifying.  Benstein has written something of a magnus opus. 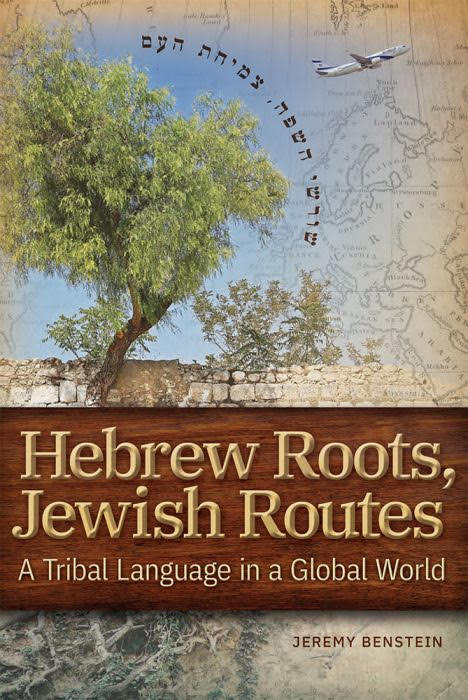 Dr. Benstein is one of Israel’s most beloved and widely admired environmental intellectuals and educators, who helped establish the Heschel Center for Sustainability. His first book The Way into Judaism and the Environment is arguably the most thoughtful, insightful and accessible tome in the growing literature about the topic. There, Benstein managed to elegantly bring together the science of sustainability and the wisdom of Judaism for the benefit of both experts and novices in the field. In his most recent book he again brought his formidable scholarship, wit and personal passion for languages to a book which can already be recognized as an unparalleled introduction to the Hebrew language – benefiting both native speakers and those still unfamiliar. It’s an absolutely fascinating 193-page ride.

Benstein studied linguistics at Harvard before taking a masters’ degree in Judaic Studies and doctorate in anthropology. Hebrew Roots, Jewish Routes not only reflects the interdisciplinary richness of his formal academic training. It also sparkles with his intelligence and uncanny ability to synthesize. In a world which rewards academics for narrow, esoteric expertise –where scholars increasingly know “more and more about less and less” — this rare display of erudition is positively refreshing. Indeed, there is probably no one else on the planet who could have written a book that entertains while so effectively conveying the sensational components of the Hebrew tongue.

Benstein’s motivation in writing the book is stated up front: he is troubled by the steady loss of Hebrew literacy, even among committed and knowledgeable Jews and believes that a heavy price is a paid.  Benstein argues quite convincingly that without a connection to Hebrew, one can be Jewish, but that it’s much harder to “do” Judaism. Paraphrasing Coleridge he explains that studying translated, traditional Jewish sources is analogous to “kissing one’s lover through a veil.” He explains “living your cultural or spiritual life as a tourist, a foreigner, always in perpetual translation makes it difficult to get beyond superficiality.” The book then moves on to uncover several of, “the deeper reservoirs of meaning” in the language – from the Bible to modern Hebrew slang.

Hebrew has evolved dramatically during the past 120 years. For much of one chapter, Benstein explores the differences between what might be considered essentially two different languages. One he calls: Historical Religious Hebrew; and the other Contemporary Vernacular Israeli. He points out that of the 34,000 entries in the definitive “Even-Shoshan modern Hebrew dictionary, only 21 percent (7,238 words) are of Biblical origin. Moreover, many of the ancient words have developed to have entirely different meanings. Hence a modern Hebrew speaker sees “meshulash” and thinks – “triangle”. For those only familiar with the Bible, it means a “three-year old calf.” Or the word “tarbut” or culture – holds a highly positive connotation today. Yet, originally it was a pejorative term, representing, cultures of sinfulness.

Ultimately, Benstein joins the scholars and linguists that reckon that Biblical protagonists would probably be able to understand the Hebrew spoken on the streets of Jerusalem today.  But he does not minimize the gaps in present Israeli understanding of  classical Biblical Hebrew. This is epitomized by a few lines of  the classic, 13th century Hanukah song “Maoz Tsur” (Rock of Ages), which for most Israelis today are simply indecipherable.

Much of the book is based around presentation of shoreshim – the three-letter roots that provide the core for so many Hebrew words. These roots can be manipulated to become verbs, nouns, adjectives or adverbs by merely adding a few letters or shifting the way the vowels are placed. Hence the book’s title, “Hebrew Roots” is actually a pun — one of many. . Benstein focuses on myriad three-letter examples in what he calls “wordshops”.  Here for instance, readers learn how the three letters that make up a word “parash” (distinguish) in modern Hebrew morphed into a “parsha” (scandal) or became the “Prushim” (Pharsises) of days gone by. These one-to-two page parenthetical sections actually work well, allowing Benstein to move beyond generalizations and cleverly show how the language operates.

One interesting chapter explains the secret of how Hebrew survived for so long in exile. Here the anthropologist in Benstein slips out. He explains that Jewish communities over the ages were “diglossia” in nature. Not to be confused with “bi-lingual,” diglogssia refers to national groups that regularly use more than one language: one is considered to be the “high” or formal language for writing or religion; the other is vernacular for speaking. In fact, it turns out that for many of the centuries after the Roman exile, many Jewish communities around the world were triglossia: Hebrew was the high language of their faith, Yiddish (or Ladino) the vernacular of their community; and then there was the lingua franca in the general non-Jewish world of which they were part. The phenomenon is as old as Joseph in the book of Genesis and Benstein describes its many implications.

A final chapter called “Creeds and Deeds”  focuses on words that have particular importance in Jewish religious tradition. From “mitzvah” (commandment) to Shabbat (sabbath) to the ever popular “tikun” (repair) Hebrew words are essential to even basic Jewish literacy, critical to fully understanding the nuances of core Jewish concepts and theology.

Of course, the book is just packed with astonishing fun facts about the language. Who knew that Amana refrigerators come from the Hebrew word amana,  or “covenant.” It seems that a group of German Lutherans established communal settlements in the US under the Hebrew term “Amana,” and then created a brand of appliance under the same name which was eventually sold to Whirlpool. Or it seems that the father of modern Hebrew, Eliezer Ben Yehudah’s, five-year old son — invented the word “sivivon”– as the Hebrew word for  “dreidl.” Such colorful stories go on and on.

Hebrew Roots and Jewish Routes is not entirely perfect. The index is less detailed than it should be. A few of the double entendres might have been left on the cutting floor (although some are simply hilarious.) And nitpicking, linguistic scholars might find a flaw here are there.  But this lay reader found the writing to be extremely well documented, radiating academic authority.

While the book is quite enriching for Hebrew mavens, its larger contribution is for those who are not yet Hebrew-literate. Benstein pragmatically argues that their initial goal should be engagement and connection — not fluency. “Engaging with Hebrew isn’t a consolation prize, a poor substitute or proficiency unattained. It focuses on understanding the inner works, the roosts and patterns presented …. And their significance for Jewish life.” Hebrew Roots and Jewish Routes is ultimately a gift to motivate those who seek this sort of engagement: a primer and a road map to understanding the language that so informs Judeo heritage, as well as the present-day discourse in the state of Israel. Indeed, Benstein makes a strong case that Hebrew may actually hold the key to ensuring a unified, educated, creative, Jewish future.