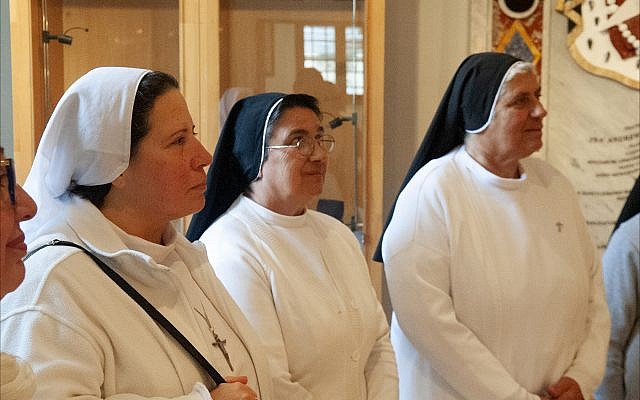 Nuns listen to a Christmas speech by Daniel de Petri Testaferrata, president of the SMOM’s Maltese Association, thanking them for their works of charity throughout the year. (Larry Luxner)

VALLETTA, Malta — When it comes to European ministates — an exclusive club that includes countries like Andorra, Liechtenstein, Luxembourg and San Marino — the Sovereign Military Order of Malta may be the most microscopic of them all.

Unlike the minuscule Principality of Monaco, which has 39,000 inhabitants crammed into two square kilometers of Mediterranean coastline — or the even tinier Vatican, with 1,000 people occupying barely half a square km in downtown Rome — the SMOM, as it’s commonly abbreviated, has neither citizens nor territory. 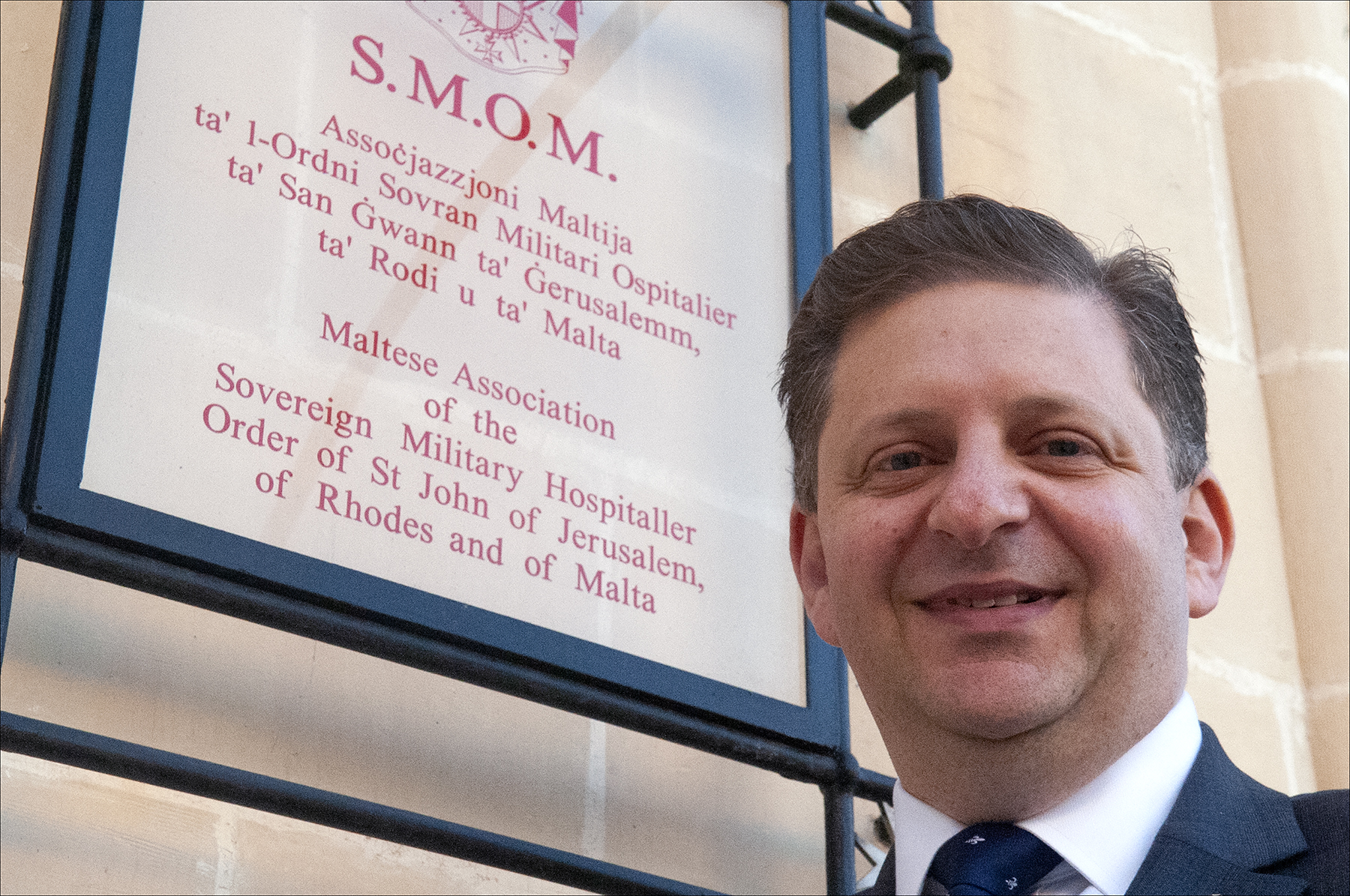 Daniel de Petri Testaferrata is president of the Maltese Association of the Sovereign Military Order of Malta. (Larry Luxner)

“One of the Order’s great strengths, ironically, is that it has neither territory nor citizens,” de Petri explained. “We therefore don’t need an army, we can’t be invaded, and we can’t be eradicated by a foreign force.”

Another irony is that, despite its long-winded name, the Knights of Malta — officially known as the “Sovereign Military Hospitaller Order of St. John of Jerusalem, of Rhodes and of Malta” — was neither founded in Malta, nor is it headquartered there.

De Petri’s full title, according to his business card, is Marchesino of San Vincenzo Ferreri. Last week, the knight agreed to be interviewed at his office, located just in front of the Parliament building in central Valletta, the medieval capital of this Mediterranean island nation. 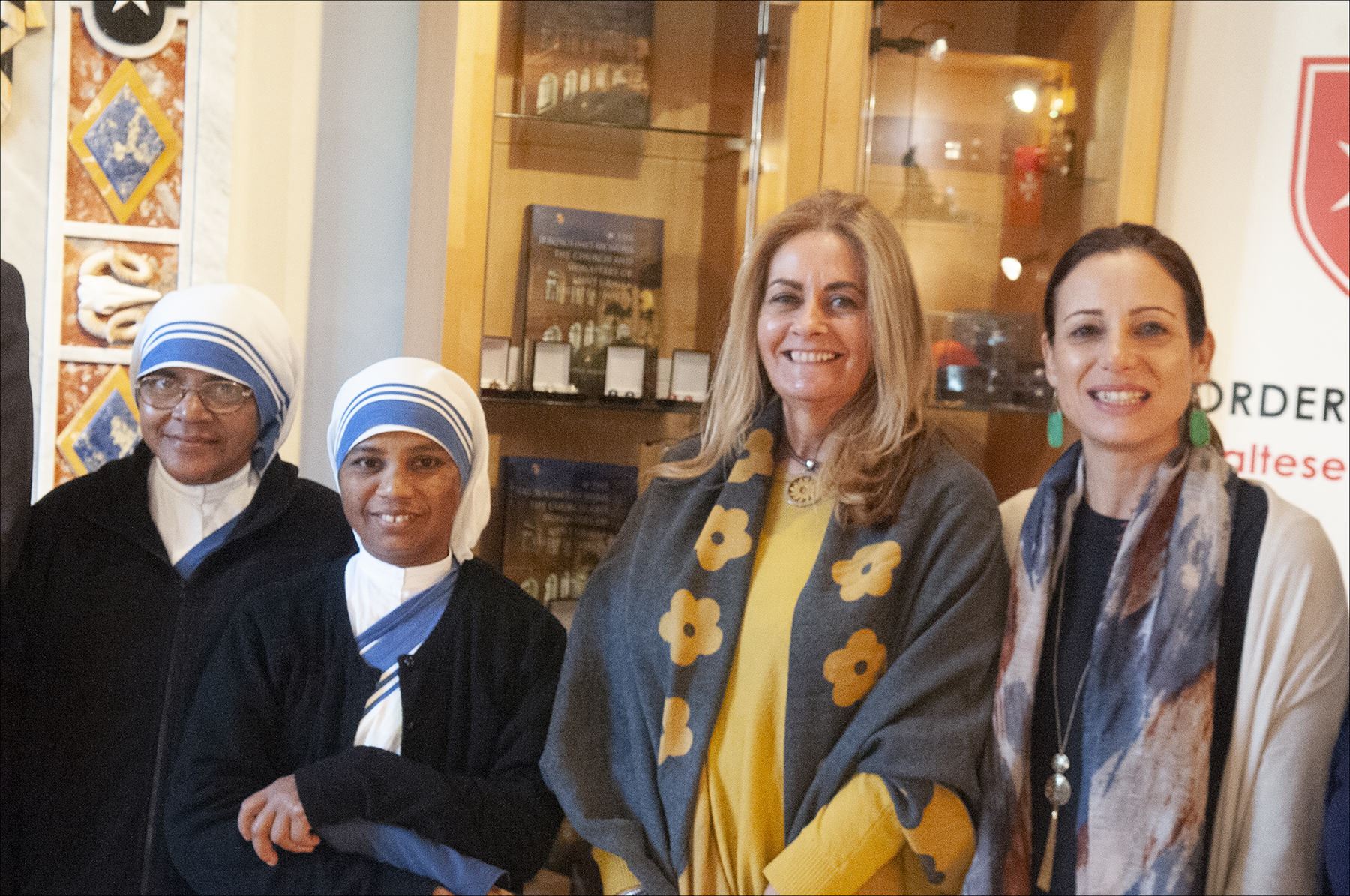 Two unidentified nuns from India — along with Helen Micallef of Malta’s Conservatorio Vincenzo Bugeja, and Lara Grima, an administration official at the Sovereign Military Order of Malta — attend a Christmas party at the SMOM office in Valletta, Malta. (Larry Luxner)

The SMOM’s vital statistics are certainly impressive. Its 14,500 members, 25,000 employees and 80,000 volunteers are currently active in 120 countries. And it commands an annual budget of 1.5 billion euros, all of it funded through donations and membership dues.

“The Order started off as a small fraternity of monks in Jerusalem. One monk from [the Italian duchy of] Amalfi began ministering to the ill. He realized that the pilgrims en route to Jerusalem were encountering medical problems, since they’d generally travel on foot,” de Petri explained. “He initially set up a hospital which eventually spread to most of the Mediterranean.”

In 1113, Pope Pascal II decided to form this band of brothers into a proper religious order, with the ability to elect leaders, mint their own coins and fly their own flag. They settled first in Cyprus, then in Rhodes, finally establishing themselves in Malta in 1530 and remaining until the French, under Napoleon, forced them out in 1798. 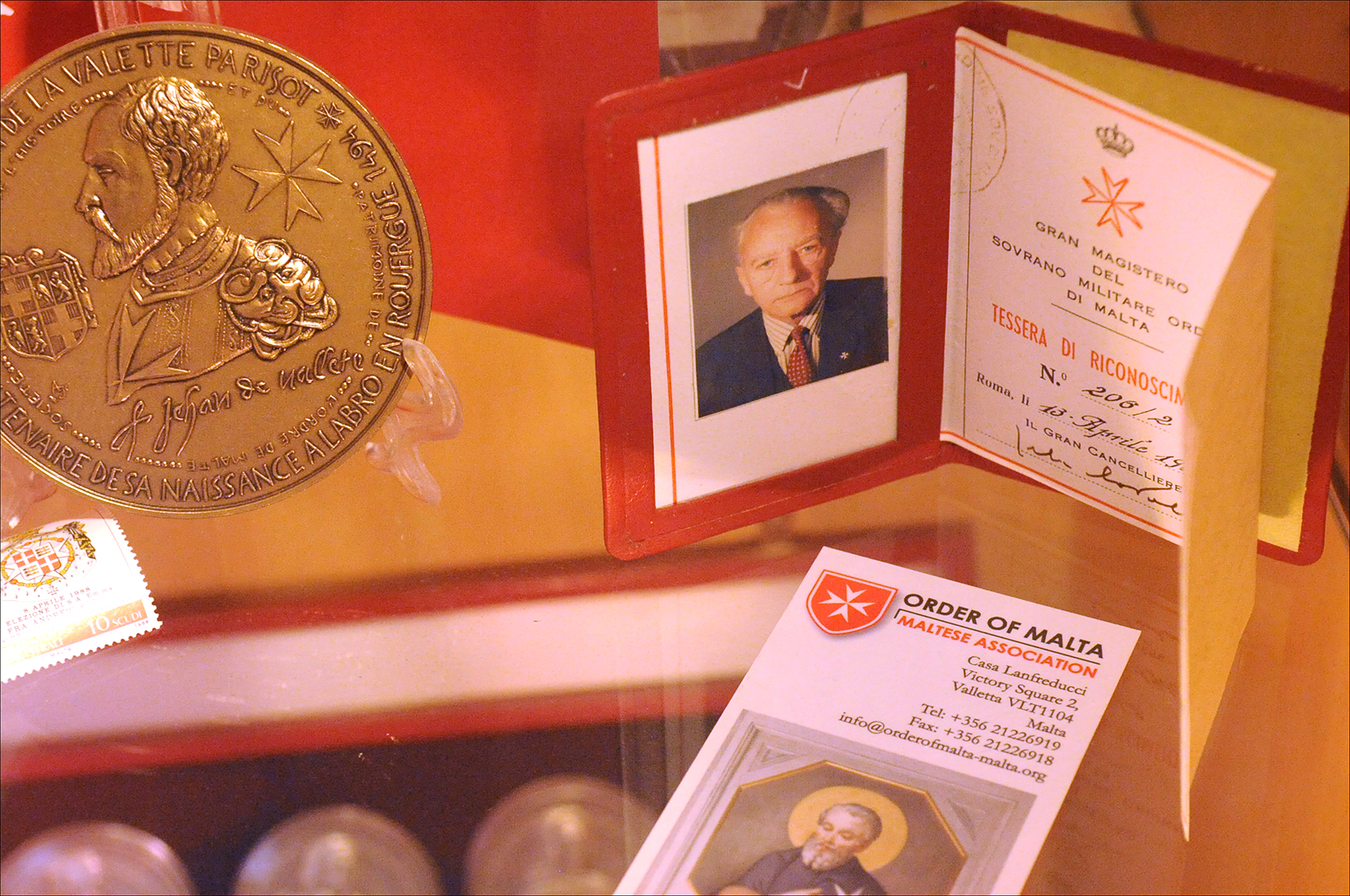 Commemorative coins, passports and other documents issued by the Sovereign Military Order of Malta are displayed at the SMOM’s local office in Valletta, Malta. (Larry Luxner)

No diplomatic ties with Israel

Since then, the Order has been based in Rome, where, in 2013, its members marked the 900th anniversary of its founding with a procession through St. Peter’s Square, a Mass in the basilica, and an audience with then-Pope Benedict XVI.

At present, the SMOM has diplomatic relations with 108 nations including most of Europe, Africa, Latin America and the Caribbean. Germany, the newest country to recognize the Order, formalized bilateral ties earlier this year.

“Many people ask me, ‘why on Earth does a small NGO like yours require diplomatic recognition?’” de Petri said. “The truth is, this organization actually manages to use its diplomatic credentials, not for the fanfare and the pomp that goes with sovereignty, but as a means to gain access to areas where organizations like the Red Cross simply can’t get into.” 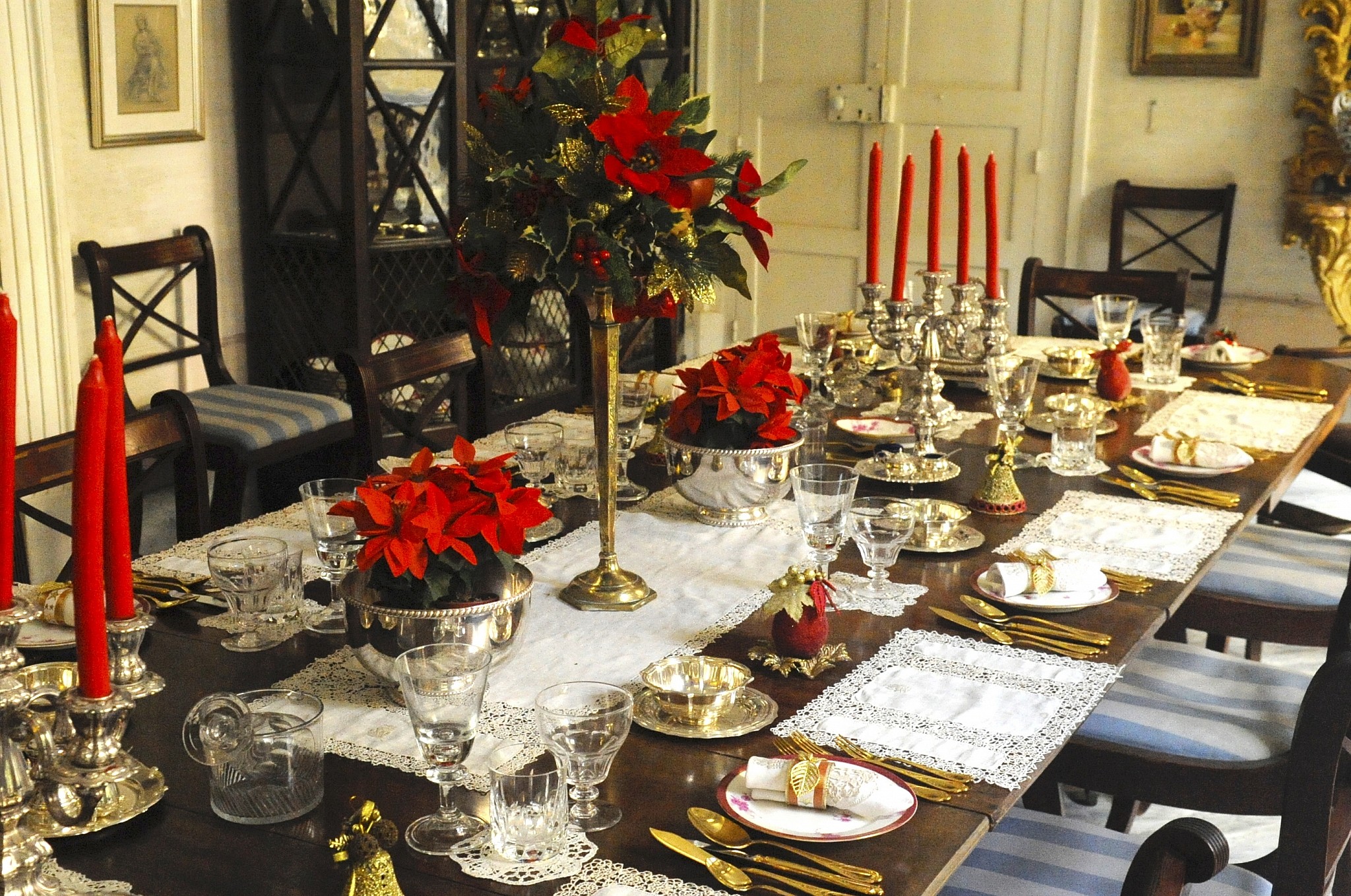 Formal dining table at Casa Rocco Piccola, the 16th-century Valletta mansion currently maintained by the family of Marquis Nicholas de Piro, a member of the Knights of Malta. (Larry Luxner)

Although the Vatican formally recognized Israel in 1993, the SMOM and the Jewish state still don’t have diplomatic relations — even though the Order began life in Jerusalem more than a thousand years ago.

“Sadly, we do not, but we’re working on it,” de Petri said. “There has been an exchange of communications with the State of Israel, and we very much hope this will lead to diplomatic relations.”

In 2013, archaeologists working in Jerusalem’s Old City found the ruins of the Order’s first hospital, dating back more than 900 years. The building, located in the heart of the Christian Quarter, was believed to have been in use between 1099 and 1291 – treating as many as 2,000 patients at a time. 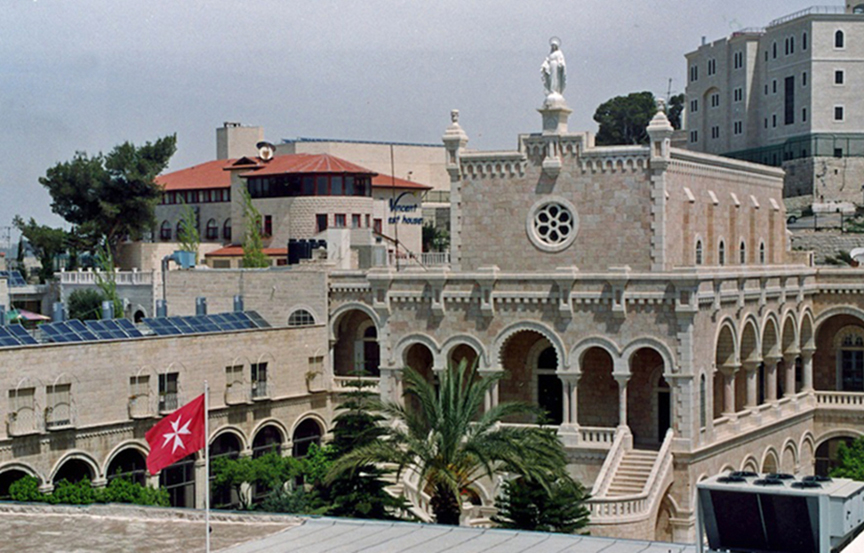 The Holy Family Hospital in Bethlehem, which serves Palestinian Arabs in the West Bank, is operated by the Sovereign Military Order of Malta. (Photo courtesy SMOM)

Meanwhile, the SMOM enjoys recognition at the ambassador level with Palestine. The Holy Family Hospital in Bethlehem, which has operated since 1895, is one of its most important humanitarian projects worldwide. Run by a staff of 140 doctors, nurses, orderlies and other professionals, the facility was forced to close in 1985 because of the Arab-Israeli conflict, but was partially reopened later as a 28-bed maternity unit.

Since February 1990, the hospital — located only 800 meters from the birthplace of Jesus Christ — has delivered more than 75,000 babies, including 4,200 in 2017 alone; it also performs around 30,000 outpatient consultations and examinations a year. In 2013, a donation from the Belgian government allowed the facility – considered among the best in the West Bank — to open a new pediatric and neonatal care unit for people living in villages around Bethlehem.

“When one talks about the Knights of Malta, the first image that comes to mind is that of a crusader bearing a sword,” de Petri said. “Today, however, the Order is a global, articulated international structure that devotes itself entirely to the care of the sick and needy.” 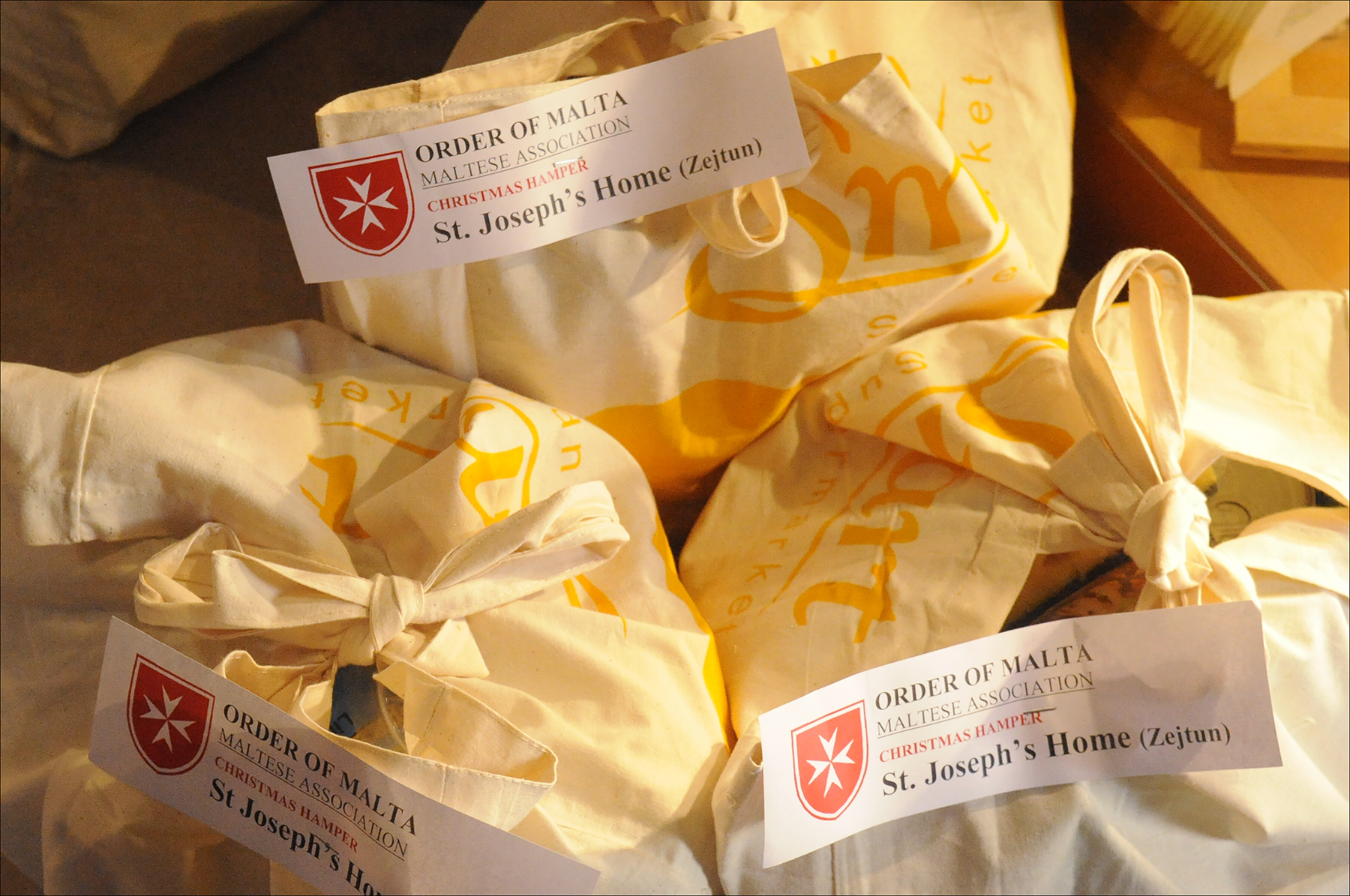 Christmas gift baskets prepared by the Sovereign Military Order of Malta and consisting of canned goods, dry foods and toys await delivery to needy people throughout the island. (Larry Luxner)

Even though a third of the Order’s members are Americans, the United States doesn’t formally recognize it. Nor does Britain or France.

“We are in the very unique position of being a sovereign entity without being a country, and the U.S. State Department requires territorial possession for diplomatic recognition,” he said. “This is a major stumbling block.”

De Petri began volunteering with the Order in 1989, made his first pilgrimage to Lourdes, France, in 1991 and officially joined the SMOM in 1998. Two years later, he was elected as a member of the council of the Maltese Association, and in 2015, he became its president. 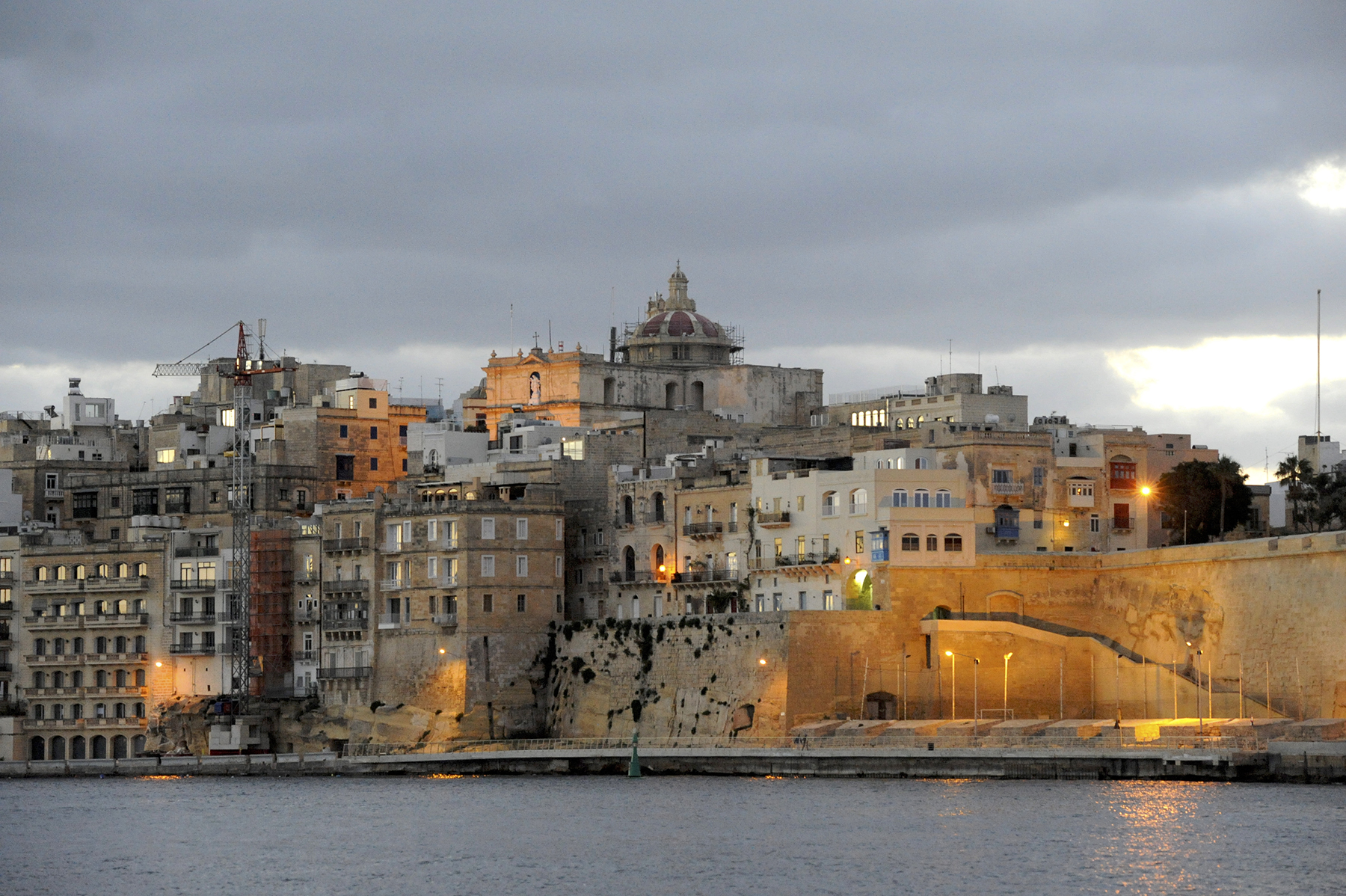 The skyline of Valletta, Malta’s capital, at sunrise. Despite its name, the Sovereign Military Order of Malta was neither founded in Malta, nor is it headquartered on the Mediterranean island. (Larry Luxner)

“The word ‘military’ does not refer to a sword or a gun, but by the fact that we are classified by the Vatican as a military order,” he explained. “The Order of Malta is of the Church, therefore it owes its obedience to His Holiness, the Pope. As far as religious matters are concerned, when we’re talking about temple matters, we act in partnership with the Vatican.”

“At the top are those men — and they’re only men — who have taken the three vows of poverty, chastity and obedience. Essentially, they are monks known as Knights of Justice who have devoted themselves entirely to the Order,” he said. “The third class, about 13,000 knights and dames, constitutes the vast majority of our members. I’m in the second class.” 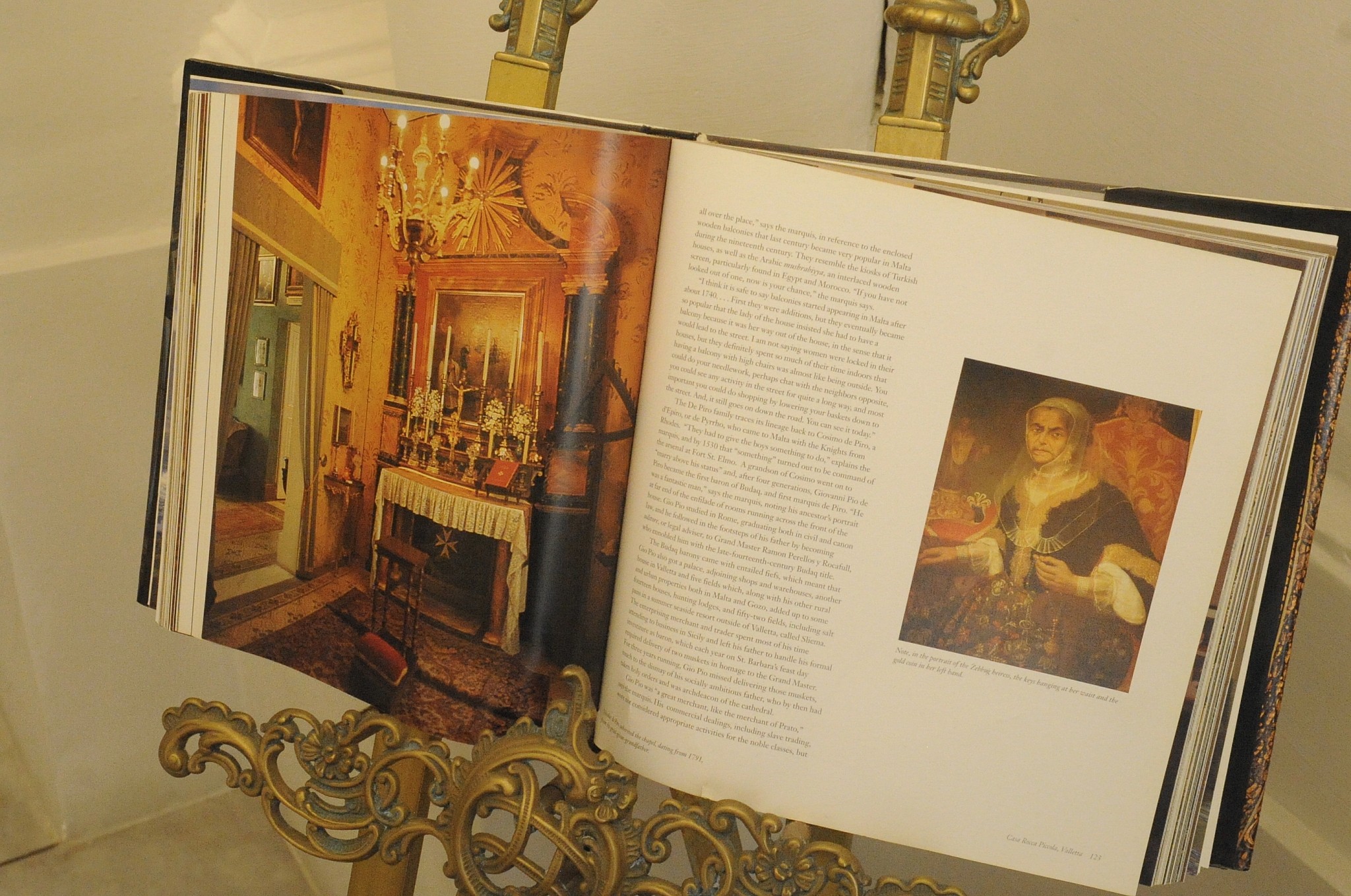 A souvenir book on display in the lobby of Valletta’s Hotel Domus Zommitello displays period furniture and art from Casa Rocca Piccola, the 16th-century palace of Marquis and Marchioness de Piro. (Larry Luxner)

This middle category “are those members of the third class who wish to dedicate themselves more.” He said the group — consisting 1,500 knights, including 16 in Malta — was “born out of necessity, in that the Order of Malta realized it had too few Knights of Justice to run itself properly.”

De Petri said 99 cents of every dollar the Order receives in donations go directly to the hospitals, first-aid clinics and rescue operations it maintains around the world.

“Here in Malta, every member pays 400 euro per year in dues,” he said. “You’d spend far more to be a member of a country club.” 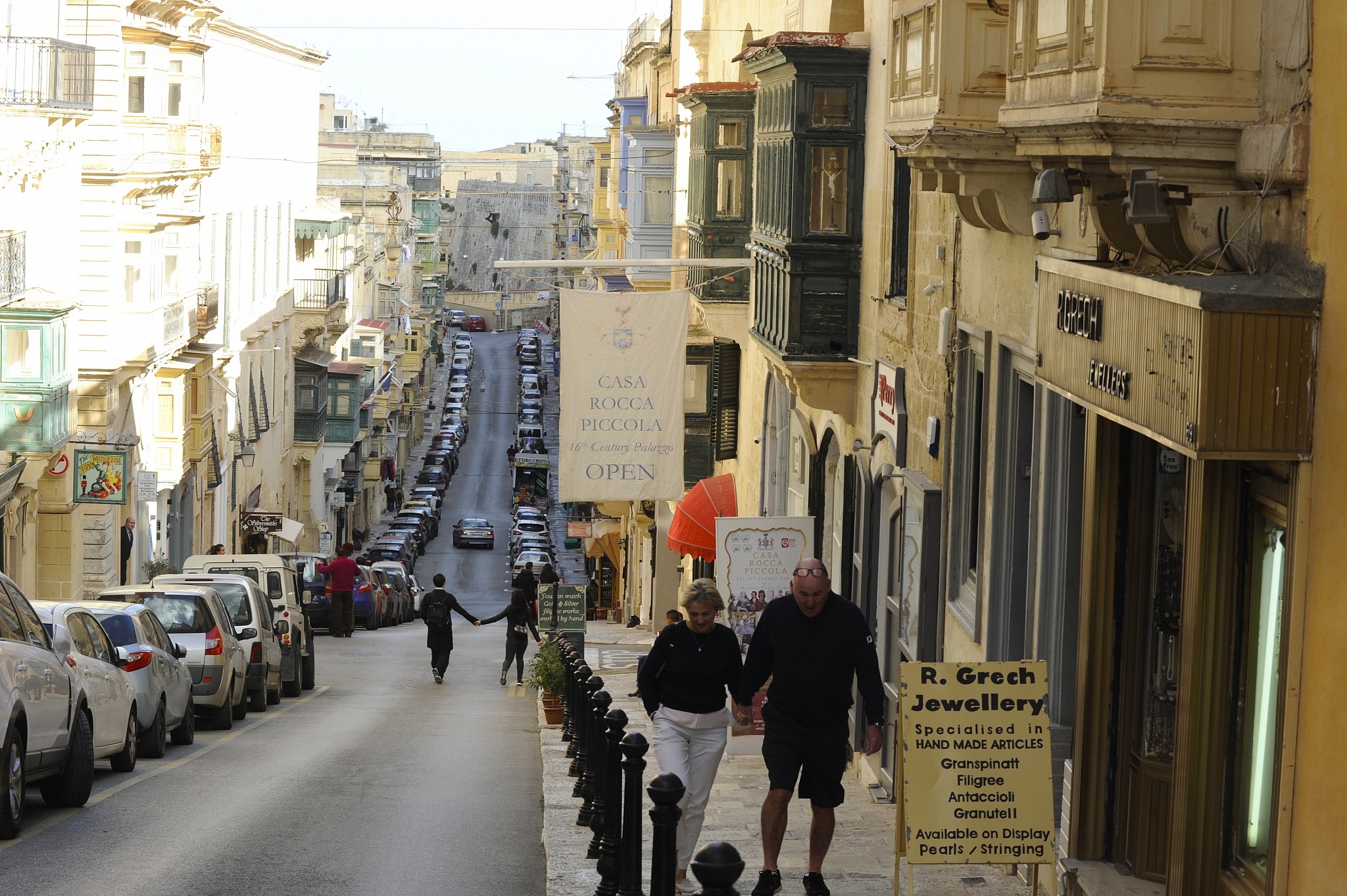 Casa Rocca Piccola, at 74 Republic Street in Valletta, is the 16th-century home of Marquis Nicholas de Piro, one of 105 local knights who belong to the Sovereign Military Order of Malta. It’s also a major tourist attraction. (Larry Luxner)

One of the many local charities the Knights of Malta funds is the Conservatorio Vincenzo Bugeja, which provides residential care for 22 teenage Maltese girls from broken homes. The girls, aged 11 to 18, all have psychological, emotional and social difficulties.

“The Order has helped us with many activities which all the girls are invited to, like children’s parties and day trips to Gozo,” said Helene Micallef, an official at the St. Venera home. “At Christmas, the Order gives us gift boxes for the girls. But what they look forward to most of all is the annual trip to Lourdes, where they sponsor one child every year.”

Among Malta’s 105 knights is Marquis Nicholas de Piro. The nobleman and his wife, the Marchioness Frances de Piro, were the first members of the Maltese aristocracy to open their family’s house to the public. They’ve lived in the ornate 16th-century Casa Rocca Piccola on Valletta’s Republic Street for the last 28 years; de Piro’s parents resided there for 25 years. 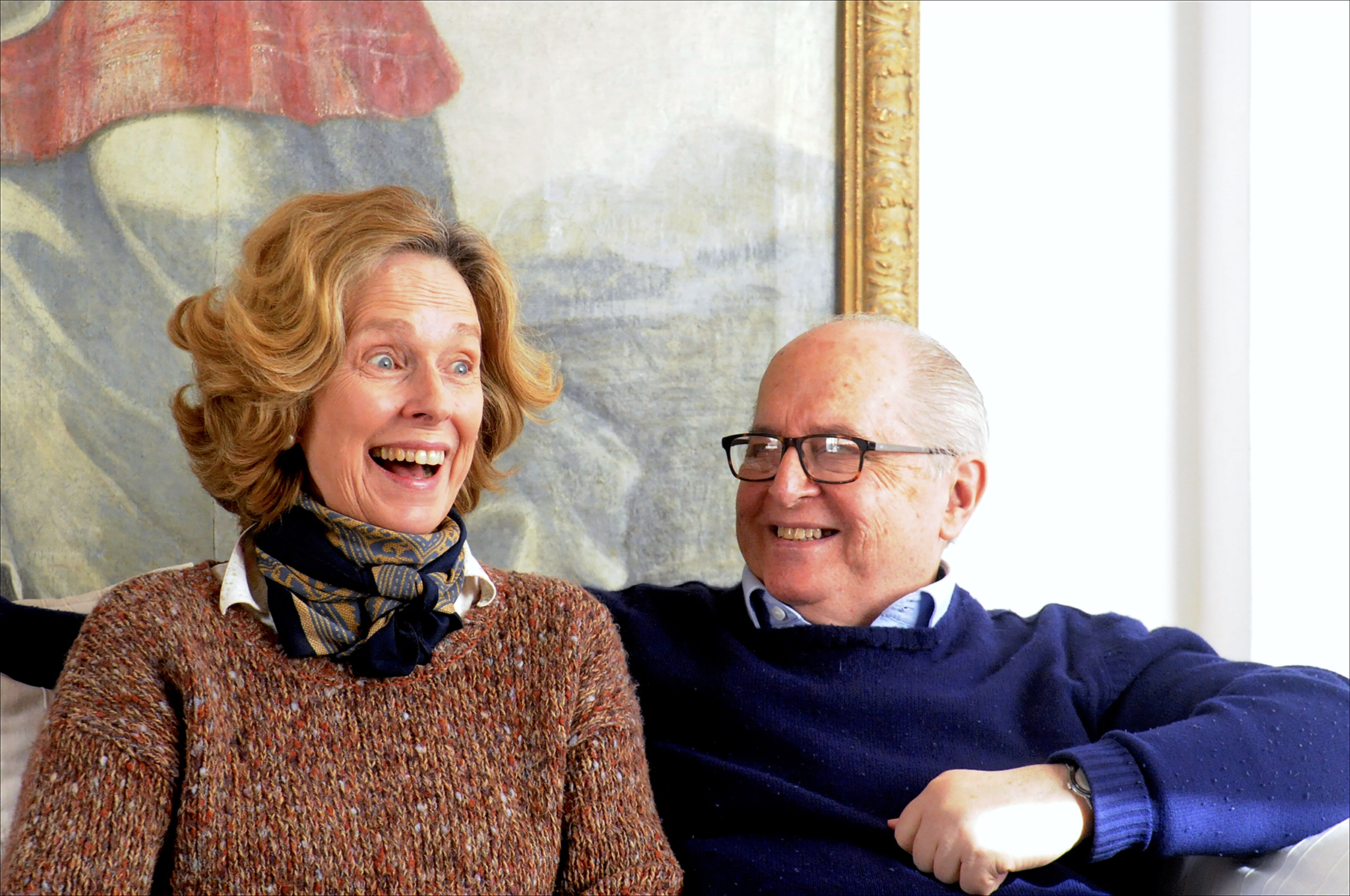 “You cannot become a member of the Order simply because you want to. You have to be recommended,” said de Piro, whose art-filled palazzo has become one of Valletta’s top tourist attractions. “We have strict instructions. Once a year, the knights and dames are asked who to take in. We usually recommend one or two people.”

“The head of our Grand Majestry, Andrew Bertie, had to be celibate to become the grand master. Because I’m married, I can only go so high,” said de Piro, noting that the vow of poverty isn’t necessarily meant to be taken literally. “The Order does not have a Franciscan quality, with knights going around in sandals. But they must be prepared to serve.”