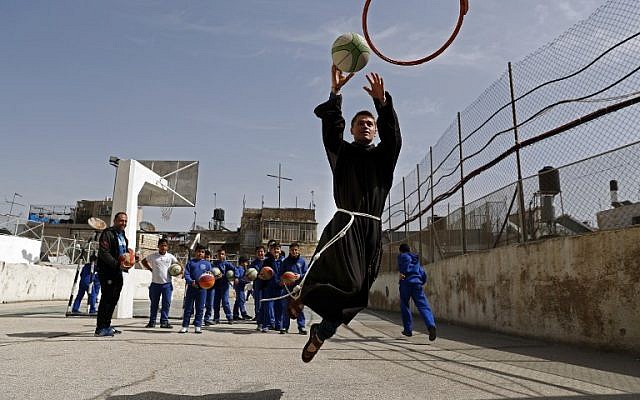 A Franciscan friar plays basketball with children from the Terra Sancta school during a sport session in the Old City of Jerusalem, on March 1, 2018. (AFP PHOTO / Thomas COEX)

You’ve seen the headlines. We have our flags and our banners and our slogans and our shouts — a few lines from Prime Minister Netanyahu, another few lines from President Abbas, the chief rabbi speaks, then the mufti, a priest weighs in, and it’s all soaked and saturated and boiled down to a two-minute broadcast that’s supposed to sum up the entire situation in one soundbite.

In the morning, it’s the clang of the blue metal doors that open one by one, the hiss of the tea kettles, the sound of worn fingers turning newspaper pages, the shopkeepers calling out to one another “Salaam Aleikum” in Arabic or “Shalom Alechem” in Hebrew — Peace be upon you, and you and you. It’s the jackhammer fixing the sewer, the plumber unclogging a drain. It’s the roar of my friend Wassim’s Harley Davidson as he drives through the Christian Quarter to open his tattoo parlour — which may be the oldest tattoo business in the world. It’s the buzz of his tattoo needle, a modern version of what his grandfather once used when he dipped his needle into ink made of soot and wine, and tattooed the faithful on their pilgrimages.

It’s the clatter of loose change in the beggar’s cup just inside Jaffa Gate.

It’s the Cat Lady from the Jewish Quarter feeding the cats. It’s the alarm clocks going off, and kids grumbling In Hebrew, Arabic, and Armenian: “Noooo, I don’t wanna go to school.” It’s mothers answering, “Too bad, it’s time to get up.” It’s the jangle of metal keys locking doors, and unlatching bicycles, the waif officials feeding the birds and the cats on the Temple Mount, the Greek Orthodox priest and the Catholic priest both trying to out-pray the other in the Church of the Holy Sepulchre, and the rabbi’s wife weeping against the Western Wall for her son to return safe and unharmed from his military service.

It’s the sound of the border police on their patrols through the quarters, standing guard at the intersections, the sound of their boots scuffing the stones, the static from their radios, the wail of an ambulance when a new mother gives birth.

It’s the beating of doves’ wings when they take flight.

The afternoons in the Old City are much louder — a warble of so many languages, in the flow of things, of visitors and merchants, holy men and madmen. Some sing, some pray, some haggle over the price of a menorah or a stuffed camel or an olive wood cross, some laugh. I’ve seen grown men drop to their knees in humble supplication and weep, just like it’s always been since Jerusalem became a thing — that place that grew from legend, that grew through prayer, that grew because we set our sites upon it, and so it was: a holy city.

There are church bells several times a day. There is the call to prayer echoing off the stone from the minarets — each one has its own recorded voice and each one of those voices is different — some are higher, some are lower, one guy sounds like maybe he’s from New Jersey, although he probably isn’t, another sounds like he studied opera with Pavoratti. They’re all beautiful apart, and even more beautiful together, although they all start at different times so some moments are harmonious and others dissonant, but that’s Jerusalem. On Friday, there is the Sabbath siren that sounds just before sundown and ushers in the Jewish day of rest. There are yeshiva boys singing on the way to the Western Wall. There is Palestinian hiphop or Oum Kalthoum blasting from the shops and stands. Pilgrims sing in harmony, sometimes they bang drums, sometimes they strum guitars, and even when they’re off key — which is often — it’s still beautiful to hear, and just as beautiful as everything else.

There’s a guy who runs a currency exchange shop in the Muslim Quarter who lost his voice box, but he’ll press on his windpipe and sing something by Fairouz.

I’ve heard “Death to the Jews” in Arabic.

The Old City in the afternoon is a young father’s cry when a Border Police officer beat him for no other reason, other than not having the right papers.

The Old City in the afternoon is the young mother’s cry when her husband is murdered in a terror attack in front of her and sinks to the ground in a pool of blood, while the nearby merchants kick her and spit on her, until the Border Police come to rescue her.

I’ve heard the boom of a stun grenade, and the sound my own flip flops make when I’m running.

And then I’ve heard the clang of pipes, and frantic shouts — the scrape of a match and the hiss of a cigarette, all this during the riots around the Temple Mount last summer, and I heard the sound of my own heart beating until I looked up and realized that what I was hearing was a group of Palestinian men, a nun, and a few tourists trying to dismantle a pipe where a newborn kitten was trapped inside.

When they pulled him out, I heard the kitten meow — a tiny, hopeful sound, and then the sound of all of us cheering, loud and joyful, in Hebrew in Dutch, in Arabic, in English, all together now.

At night, the Old City has an echo — footsteps on the ancient stone. A door bangs open. A window closes. Some children say there is a giant snake that lives way down deep in the layers of the Old City, down in the tunnels, and if you listen, you can hear him spooling through the darkness late at night. It’s couples bickering or making love, a laugh. A sigh.

I’ve heard a colicky baby and I can’t tell if the baby is from the Jewish Quarter or the Muslim Quarter, and it doesn’t matter anyway because all babies cry and all babies sound the same, and mothers and fathers walk the floor back and forth and whisper, Shhhhh shhhh shhh my little one, sleep.

At night, there’s the rooster that never sleeps and he crows at midnight, especially full-throated and proud when the moon is full. It’s the wind. It’s an old man snoring, an old woman praying, and the late night news broadcast, and the click of the radio when I turn it off, because I know there’s so much more than just the news to hear.

For more stories from the Old City,  check out my memoir Jerusalem Drawn and Quartered, a love story about people, faith, and desire available on Amazon and Book Depository.