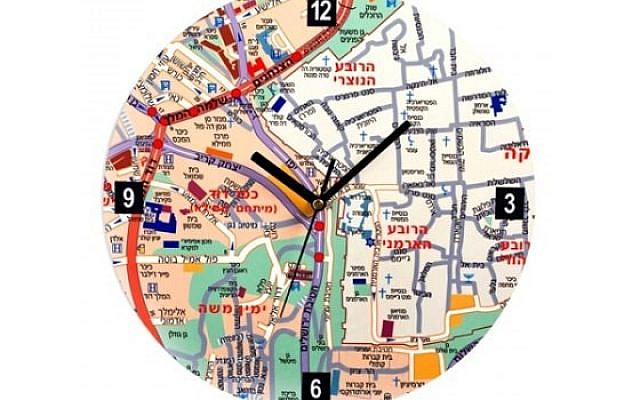 Covid-19 is affecting us all differently, but an experience that’s almost universally shared is the interruption of time. Our familiar passages of time, marked by going to work, taking kids to school, appointments, culture, travel, offering and receiving hospitality and so forth, came to a grinding halt. One day of the week ran into the next, differentiated only, perhaps, by our respective Friday, Saturday, or Sunday holy days. Days and nights lost their distinctiveness. Some of us check the news in the middle of the night or read health and welfare reports from family and friends in different time zones. Others wear pajamas all day, adding a shirt as required for Zoom meetings. The future is on hold; events we looked forward to have been postponed or cancelled.

Since we cannot celebrate our feasts, fasts, and festivals in the usual ways, sacred time has temporarily eclipsed sacred space; the ‘when’ outweighs the ‘where’. Passover and Easter are over, but Ramadan continues. Each day in Jerusalem, the Ramadan canon signals the end of the fast, as it has for the past 120 years or more. 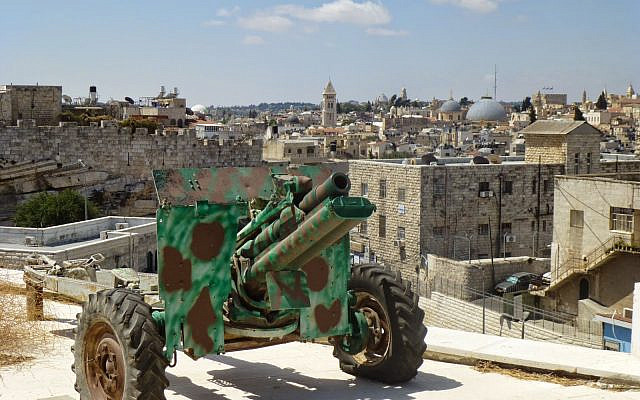 But there’s no joyful communal iftar meal to follow. Muslims, like Christians and Jews over the past month, must celebrate in family units. Ramadan Nights from Jerusalem, a series of live public concerts, lectures and workshops planned by a broad coalition of Jerusalem cultural institutions and community organizations, has been replaced by a – not live, but still wonderful – website of virtual and digital ‘live’ and pre-recorded programs that you can watch here. 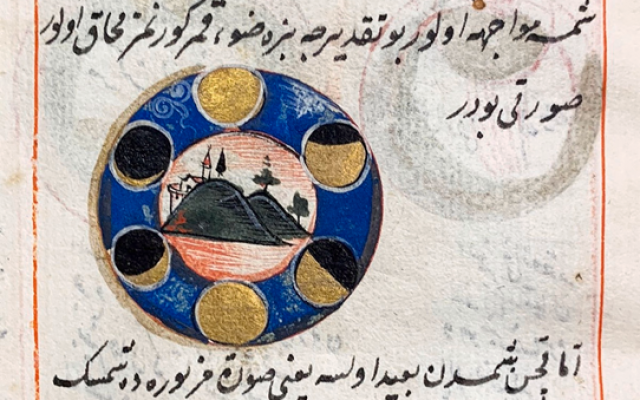 Time marches on, and generally we march with it. But loss or dislocation, whether collective, like the side-effects of Corona, or individual, like bereavement from any cause, can lead us to fall out of step with time. No longer an abstract principle ticking away unobtrusively in the background, time becomes a tangible, even oppressive, presence in our lives. W.H. Auden wrote about bereavement and time in a poem made famous by the film Four Weddings and a Funeral; he wanted to ‘stop all the clocks’.

A literary account of the interaction of loss and time that resonates for me personally – my experience was similar after the unexpected death of my first husband, Peter Lipton z.l. – occurs in Audrey Niffenegger’s 2003 novel, The Time Traveler’s Wife. The narrator has just lost her husband.

I sleep all day. Noises flit around the house – garbage trucks in the alley, rain, tree rapping against the bedroom window. I sleep. I inhabit sleep firmly, willing it, wielding it, pushing away dreams, refusing, refusing. Sleep is my lover now, my forgetting, my opiate, my oblivion. The phone rings and rings. I have turned off the machine that answers with Henry’s voice. It is afternoon, it is night, it is morning. Everything is reduced to this bed, this endless slumber that makes the days into one day, makes time stop, stretches and compacts time until it is meaningless.

It is, to put it mildly, fitting that just as bereavement is often experienced as temporal dislocation, a falling out of step with time, so the primary Jewish response to bereavement involves the organization of time: 3 days of intense mourning; 7 days of shiva; the shloshim – 30 days of continued mourning; and the yahrzeit – the yearly anniversary. Slowly but surely, the mourner is ushered beyond the moment when the clocks seemed to stop, and back into the march of time. (How many of us have been forced by Corona to mark these stages of mourning in time, perhaps supplemented by Zoom, but not in space?)

The Jewish genius for organizing time is not, of course, only in response to bereavement. Many of us are doing it right now as we ‘count the omer’, numbering the days of collective semi-mourning between Passover and Shavuot. 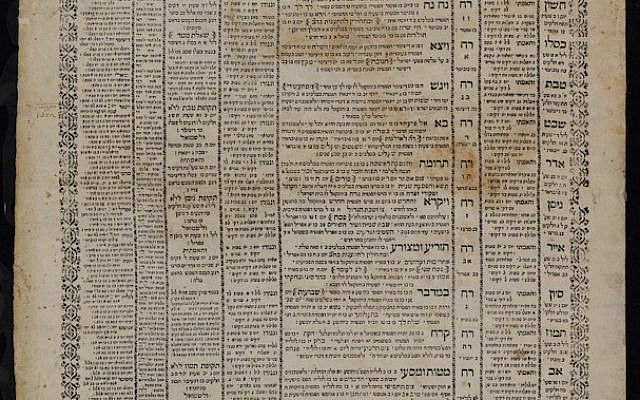 Printed by Juan [Giovanni] di Gara. Prepared and researched by Rabbi Jedidiah of Rimini and brought to press by Rabbi Isaac Sullam. Beginning this year, the calendar includes a column that enumerates each of the forty-nine days of the Omer. This column also appears in the Venice calendars for the years 5365 (1604 – 1605) and 5367 (1606 – 1607), National Library of Israel, Valmadonna Trust.
The preoccupation with time began in Genesis 1, when God created the world – in space and in time. You might not remember exactly what was created on each day, but you’ll never forget that God made the heavens and the earth in six days and rested on the seventh. 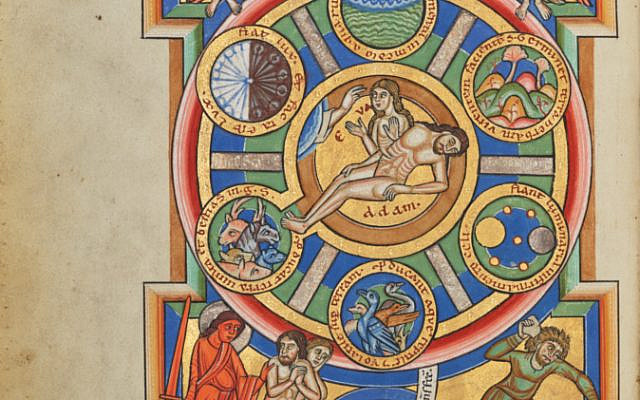 Going forward, days are generated automatically by the natural order that God set in motion. A day is the product of a night and a day – two consecutive periods characterized respectively by darkness and light. Nights and days are generated by the rising and setting of the sun. No matter what human beings do or fail to do, post-creation, time will march on in the shape of the days of the week.

The week itself, by contrast, can exist only through continuing human activity. There would have been no more 7-day weeks after that first one unless people created them. The Torah provides clear instructions about how this should be done, including in this week’s parsha, Emor:

Leviticus 23:3 Six days shall work be done; but the seventh day is a sabbath of complete rest, a holy convocation; you shall do no work: it is a sabbath to the Lord throughout your settlements.

People, or at least some people, must differentiate one day of the week from the others by imitating God’s behavior in the week of creation – working for six days and resting on the seventh. Days, like the mo’adim, the seasons and their associated festivals, are forever fixed in the natural order, determined by the sun, moon and stars (Gen 1:14) and the agricultural events that are the emphasis of Deuteronomy’s festival calendar (chapter 15). This week’s parsha introduces a calendar with set dates to help ensure that the festivals are kept at the appropriate times:

But the responsibility for maintaining the 7-day week as a distinct temporal unit rests entirely on human shoulders. The failure to mark Shabbat will render one weekday indistinguishable from the next, and the 7-day week, along with its connection to the creation of the world, will be lost. This distinction is more crucial than ever during periods of disrupted and disordered time, such as mourning and, yes, Corona Time. Indeed, I’ve heard several people say that setting apart Shabbat, by lighting candles, for example, acquired a new significance when all the other days of the week were indistinguishable from each other.

For the last couple of years, I’ve organized and hosted events on and around Jerusalem Day, under the umbrella of Jerusalem Tolerance, an initiative aimed at promoting tolerance and multiculturalism in our city. I wrote about it here. This year, since time has been so much on my mind, I decided to enlist a stellar group of wonderful friends and colleagues to help me reflect on it more productively.

Jerusalem Time: A Symposium, Thursday May 21, 20.00 to 23.30 Israel time, is an opportunity to think analytically, imaginatively, and deeply about time. Time is a complex matter in Jerusalem, a city that’s home to three major world religions, each with at least one calendar of its own, not to mention several different time zones – all in Meah Shearim. And that was before we added Corona Time into the mix. Join us on Zoom on Yom Yerushalayim for 7 eye-opening 30-minute conversations in English about time in Jerusalem and beyond – with an artist, a philosopher, an Imam, a Greek Father, a yeshiva bocher, a film-maker, a climate change activist, a classicist, 2 Talmud scholars and more. Your alarm clock may never look the same again.

You are warmly invited to register here to join us on Zoom or to watch on YouTube on the night here. The full program is here and below. 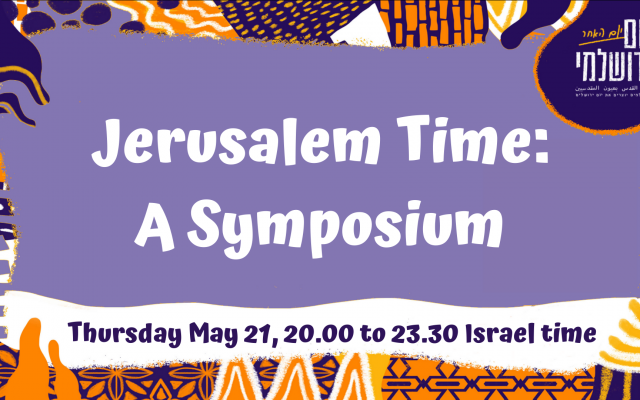 20.30. Beyn Hazmanim. Professor Moshe Halbertal, Department of Jewish Thought, Hebrew University and NYU Law School, will talk to Josh Schonfeld, a graduate of Mir Yeshiva and Yale Law School, now learning at a kollel in Dallas on his way to becoming a tax lawyer, about time as an organizing principle in the life of a yeshiva bocher.

21.00. ‘Sanitation is a Philosophy of Time’. Documentary film-maker Toby Freilich, director of Inventing Our Lives and co-director of Moynihan, will talk to Mierle Laderman Ukeles, the ground-breaking artist who spent 40 plus years as Artist in Residence at the New York Sanitation Department, about the role of time in Maintenance Art.

21.30. Short of Time. Dr. Ruth Ostrin, Director of Israel’s Environment and Health Fund, will talk to Micha Price, a Jerusalem resident currently researching at Israel’s Arava Institute for Environmental Studies, about the distinctive role of time in the life of a climate activist.

22.00. Time Keepers. Chaim Milikowsky, Professor Emeritus of the Talmud Department, Bar Ilan University and author of a commentary on Seder Olam, a unique rabbinic chronology of biblical events, in conversation with Father Dr. Isidoros Katsos, Visiting Fellow at Hebrew University’s Center for the Study of Christianity and a resident of Jerusalem’s Greek Orthodox Patriarchate, a community constructed around times for prayer.

22.30. On Calendars and on Time. Imam Abdullah Antepli of Duke Divinity School and Duke’s Sanford School of Public Policy, and a frequent visitor to Jerusalem, in conversation with Dr. Raquel Ukeles, Curator of the Islamic Collections, National Library of Israel, about how time is made tangible in Islamic tradition.

23.00. In and out of Time. Professor Simon Goldhill, Department of Classics, Cambridge University, in conversation with Dr. Lynn Kaye, Department of Near Eastern and Judaic Studies, Brandeis University about Lynn’s recent book, Time in the Babylonian Talmud (CUP 2018) and Simon’s book in progress on what early Christians did with time.