The Dead Sea Scrolls were discovered between 1946 and 1956, first by Bedouin goat-herds and then by archaeologists, in caves on the shores of the Dead Sea, next to the ancient settlement of Qumran. 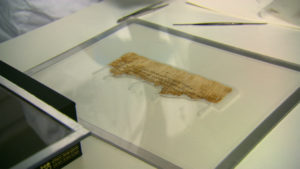 Dead Sea Scroll fragment “4Q451”. Does it refer to Jesus?

The find caused an immediate sensation because the scrolls are a sort of ancient library, stored in clay vessels, that include the oldest manuscripts of the Hebrew Bible ever uncovered. Scholars have dated the scrolls from approximately 200 BCE to 70 CE (the date of the destruction of Jerusalem by the Romans at the end of the Great Jewish Revolt (66-73 CE)). Meaning, some of the scrolls were written and/or copied during the lifetime of Jesus of Nazareth.

From the moment of their discovery, some scholars suggested that at least some of the scrolls may be the work of early Christians. After all, a certain “Teacher of Righteousness” is mentioned as a persecuted figure and there is also a “Wicked Priest” and other characters that seem to mirror early Christianity. Most scholars, however, have dismissed any connection between the community that hid their scroll library some 2,000 years ago in caves at Qumran and the earliest followers of Jesus. Now, I’ve made a discovery that may change all this. Put simply, I believe that one of the fragments called by scholars by the very unappealing name of “4Q541” explicitly refers to Jesus.

I was first drawn to this fragment by the authoritative translation of The Dead Sea Scrolls by Florentino Garcia Martinez (1996, Brill). In fragment 24, column 2, the scroll refers to someone called “The Dove”. The writer of the scroll asks that the dove’s followers “not mourn for him”. And he further says; “do not bring the nail near him”. Given that Jesus is often identified with a “dove” (e.g., Matthew 3:16, Luke 3:22), and the Gospels explicitly refer to the “nails” of the crucifixion (e.g., John 20:24) and also to the “mourning” of his followers after the crucifixion (e.g., Luke 24:17), it seemed reasonable to me that “4Q541” may be referring to Jesus. So I looked up Martinez’s more complete “Study Edition” of The Dead Sea Scrolls (1997, Brill), which also supplies the Aramaic original, to see what I could learn. I learned a lot.

I learned that Martinez must have been nervous about the original reference to “the nail” and changed his translation. In the new edition, Martinez translated the Aramaic “Tsatsa” i.e., “nail”, as “nighthawk”. More than this, in the same section, I discovered – untranslated! – the word “[T]alia” – “cross” or “crucifixion” in Aramaic! Granted, the letter “Taf” i.e., “T” was missing in Martinez’s version of the original, but it sure seemed coincidental that a possible reference to the crucifixion was in the same fragment that I now believed was referring to Jesus. What was this all about I asked myself? Why were words being retranslated or not translated at all? Were scholars worried about finding Jesus in any ancient texts other than the New Testament?

I got access to the original fragment in the vaults of the “Shrine of the Book”, which is part of the Israel Museum. With the naked eye, I could clearly see part of the “Taf” in Talia/crucifixion. The word “Tsatsa” was also very clear. I interviewed Dead Sea Scrolls scholar Dr. Alexey Yuditsky and he told me that even though “Tsatsa” in the Syriac Aramaic spoken in Israel at the time of Jesus meant “nail”, it did mean “a bird of prey” like a “nighthawk” in an obscure text of Persian and Aramaic. He also said that scholars prefer not to translate “Talia”/crucifixion because the first letter of the word is not clear. When I pointed out that many words in The Dead Sea Scrolls are translated even though they are missing a letter, he shrugged and said, “depends on the word.”

So now I became really suspicious.

At this point, my investigation took me to the translator of the official translation of The Dead Sea Scrolls, Professor/Father Emil Puech from the Ecole Biblique in Jerusalem. I brought up the issues concerning the words “Talia” and “Tsatsa”. Father Puech is aware of the hesitation to translate the plain meaning of the words. As far as he is concerned, he is sticking to his authoritative first translation, which I now learned refers to both the nail and a crucifixion. From Puech’s perspective, there is no need to translate “Tsatsa” by reference to Persian Aramaic and there is no need to leave the word for crucifixion out of the translation. “There is enough left of the letter Taf to make the word ‘Talia’ very clear.”

But then Professor Puech surprised me. He said that “dove” was the natural translation of the Hebrew/Aramaic word “Yonah”, which appears in the text, but he preferred to translate it as “agitator” because, after all, the “dove” in early Christianity refers to Jesus. In other words, by his own admission, Puech purposely fudged the translation so that the reference to Jesus would be lost. Why did he do this? According to Father Puech, by definition, “The Dead Sea text can’t be referring to Jesus.”

So what are we left with? We are left with a text where some scholars are leaving out the “cross/crucifixion” word altogether, while others are substituting “nighthawk” for “nail”. At least one scholar substituted “agitator” for “dove”, based on his preconceived ideas about the content of The Dead Sea Scrolls.

The final stop in my investigation was at the offices of Dr. Robert Deutsch. When it comes to ancient texts, he is considered by many the number one Aramaic and Hebrew epigrapher in the world. What does this text say, I asked? Without hesitating, Dr. Deutsch answered; “It seems that this is a text written by the followers of Jesus after the crucifixion. They are telling each other not to focus on the ‘nail’ and the ‘crucifixion’ as ‘their enemy’ does, and not to overly ‘mourn’ their loss but, rather, to focus on the ‘eternal light’,” mentioned at the end of the fragment.

It’s too early to tell who the “enemy” referred to in the text is or what the message of the text is. What is certain, however, is that if fragment “4Q541” is referring to Jesus then, maybe, some of the other fragments are also referring to him. Based on this investigation, perhaps it’s time to reexamine The Dead Sea Scrolls and their translations.

See my report below:

To watch all the reports click here and use discount code MOB60 (not case-sensitive) for a 60 day free trial, exclusive for my blog/Facebook followers.

About the Author
Simcha Jacobovici is a Canadian-Israeli filmmaker and journalist. He is a three-time Emmy winner for “Outstanding Investigative Journalism” and a New York Times best selling author. He’s also an adjunct professor in the Department of Religion at Huntington University, Ontario.
Related Topics
Related Posts
Comments