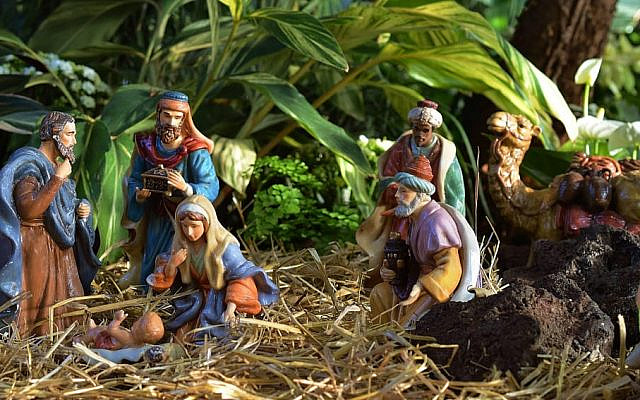 Arguments over who Jesus really was, or whether or not he even existed at all, recur at this time every year. You’ll find claims that he was “Ashkenazi”, “Mizrahi”, “Palestinian”, “Arab”, “Black”, “African-American”, and so on. Each of these groups have clashed over Jesus at various points on the assumption that, if they can claim Jesus as one of their own, they may lay exclusive claim to the mantle of the ancient Hebrews.

It is understandable that so many have coveted this mantle. To be part of the continuation of one of the most influential civilizations in human history, whose name is known and revered throughout the entire world, and to claim ownership over what is perhaps the most inspiring national narrative known to man, is quite an awesome inheritance. No surprise, then, that so many are fighting over it. But which of these claims is correct?

The answer is “none of the above”.

As I wrote in an article two years ago, Jesus was a Jew. Not a Mizrahi Jew. Not an Ashkenazi Jew. Not a black Jew. Just a Jew, born to Jewish parents in the Jewish city of Bethlehem, in the Jewish kingdom of Judea (formerly Judah). Attempting to attach any of the aforementioned diasporic identities – all of them denoting specific histories, migration patterns, and minhagim that did not apply at all to Jesus’ life – is ahistorical, anachronistic, and divisive. If we are to take “Mizrahi” as meaning “any Jew who was born in or lived in the Middle East”, Benjamin Netanyahu would qualify as Mizrahi. Furthermore, just as other diaspora Jews mixed in their respective host countries, Mizrahim mixed as well – both with local cultures in the lands they settled and (in the case of the small handful who managed to remain in Judea over the centuries) with foreign conquerors. No Jewish group – or any extant ethnic group – can claim to be “pure” Israelite.

The notion that he was “Palestinian” is even more ridiculous. In Jesus’ time, “Palestinian” referred to a long-extinct Greek settler population, known as the Philistines. The only attested reference to the land as “Palestine” came from Greek writer Herodotus, who was referring exclusively to the coastal areas where the Philistines once lived (i.e. in what is now Gaza and Ashdod). Moreover, the Philistines were an Aegean people, so it’s not hard to imagine a Greek writer using the Greek name for what used to be a Greek colony.

“When Herodotus in the fifth century B.C.E. mentions Palestine he refers only to the coastal area, so called because it had been inhabited by the Philistines; or he is speaking loosely, since the only part of the area that he had visited was apparently along the coast. During the Persian and Ptolemaic periods, the entire area between the Euphrates and the Mediterranean from Cilicia to Egypt is called Coele-Syria. The term Judaea, as used by such writers as Hecataeus of Abdera, Clearchus of Soli, and even the anti-Jewish Manetho in the early third century B.C.E. refers to that part of the area inhabited predominantly by Jews. That the official term for this region is Judaea may be seen from military diplomas and other inscriptions, as well as from coins, prior to the time of Hadrian. It is so designated in the official letter of the Emperor Claudius to the Alexandrians in the first century, as well as by such writers as Plutarch, Tacitus, and Suetonius at the beginning of the second century. Moreover, writers on geography in the first century clearly differentiate Judaea from Palestine. Even vicious anti-Jewish writers, such as Apion, Chaeremon, and Seneca in the first century, generally do not use the term Palestine. Jewish writers, notably Philo and Josephus, with few exceptions refer to the land as Judaea, reserving the name Palestine for the coastal area occupied by the Philistines. It is only centuries later, in perhaps the fifth century, that we find the name Palestine in a rabbinic work. Occurrences of the adjective Palestinian in such poets as Tibullus, Ovid, and Statius are due to metrical considerations; Palestinian as a noun does not occur in all antiquity. Coins of Hadrian issued before the Bar Kochba rebellion in 132 C.E. refer to Judaea; within a few years after the rebellion the name of Judaea was officially changed to Palestine, the aim being to obliterate the Jewish character of the land, with the name of the nearest tribe being applied to the entire area. Yet, even after the name was officially changed, some inscriptions, as well as such literary figures as Galen and Celsus in the second century, Dio Cassius and Origen in the third century, and Eusebius and Jerome in the fourth century, still refer to Judaea.” ~ LOUIS H. FELDMAN, Hebrew Union College Annual, Vol. 61 (1990), pp. 1-23

MINOR CORRECTION: The Romans renamed it to Syria-Palaestina, not Palestine.

And he was obviously not an Arab either. The Arab conquests did not happen for another six centuries. The only notable Arab presence in the Levant by the time of Jesus’ birth were the Nabataeans, and Jesus was most certainly not a Nabataean.

So who has the best claim to Jesus?

Jews do, of course. All Jews, be they Ashkenazi, Sephardi, Mizrahi, black, Kaifeng, etc. All ethnic Jews are equally Judean, equally indigenous to the Levant, and equally legitimate. No Jewish group is more “Judean” or more “authentic” than the next. Treating any Jewish group as if they are comparatively “watered down” by dint of “leaving” the Middle East (not that we had any say in the matter since, as mentioned previously, we didn’t “leave” the Middle East – we were exiled; further, a decent amount of the pre-Zionist Old Yishuvim were Ashkenazi) or outright “impostors” is divisive and hurtful.