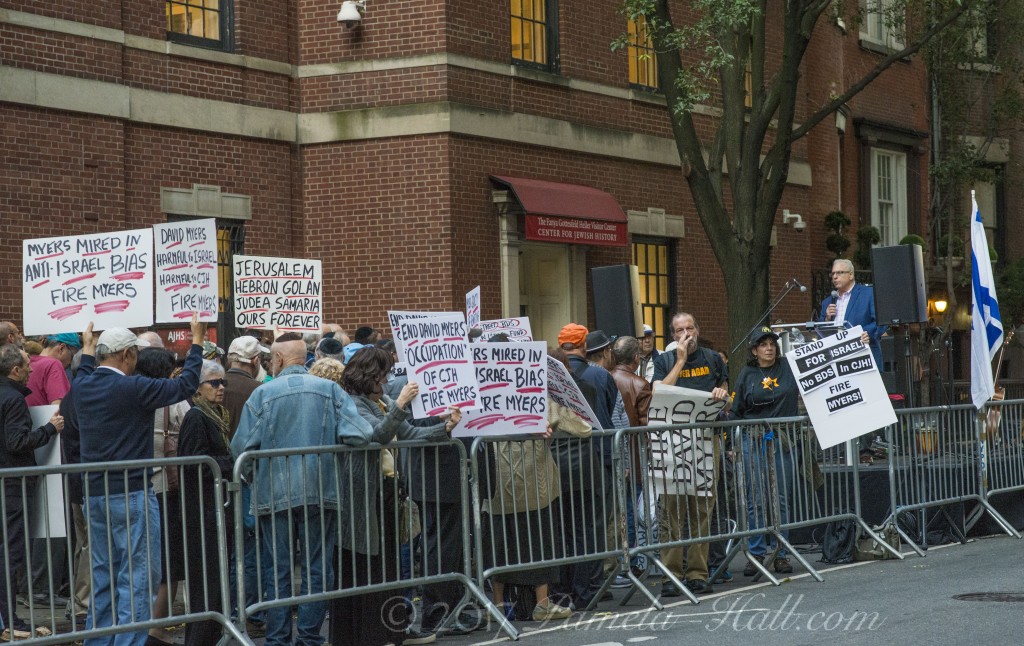 RIchard Allen Speaking In Front of the Center for Jewish History

Last week in New York hundreds of protesters gathered in midtown Manhattan in front of the building of the Center of Jewish History in a peaceful demonstration demanding the removal of CEO David N. Meyers. Many more have been involved in letter writing and phone call campaigns organized by organization’s and volunteers.

According to Lynne Bursky-Tammam and Nessim Tammam of the Yom Hashoah Mobilization Committee, “David Myers, a leader of the New Israel Fund and J Street who is an unabashed supporter of Boycott, Divestment, and Sanctions against Israel, is now head of the CJH which is a partnership of five venerable organizations: the American Jewish Historical Society, the American Sephardi Federation the Leo Baeck Institute, the Yeshiva University Museum, and the YIVO Institute for Jewish Research. Although these five partners have separate governing bodies and finances, they each have members on the Central Board of the CJH and share equally in its functioning.”

The Center for Jewish History is the museum filled with collections of its five partner organizations and constitutes the largest repository documenting the Jewish experience outside of Israel. The partners’ collections include more than 100 million documents, 500,000 books, thousands of art objects, textiles, ritual objects, music, films, and photographs. The Center also serves as a centralized place for events, exhibitions, and performances. The Center is an affiliate of the Smithsonian Institution.)

If you are wondering how an anti-Israel activist described by Daniel Greenfield as “unfit for any role in the Jewish community ended up heading the Center for Jewish History,” read Greenfield’s article (Sultanknish.blogspot.com, 10/17), It is the “tip of the iceberg,” he writes as radical activists continue to expropriate and hijack Jewish culture, thought, and history in order to pursue an anti-Israel agenda. Accepting David Myers as executive director gives credibility and a dangerous platform to those who are intent on demonizing, destabilizing, and delegitimizing Israel.

Not long after Myers was appointed, the American Jewish Historical Society announced that they would host two events: one was a play written by a member of Jewish Voice for Peace, an organization which vehemently supports BDS against Israel and holds Israel responsible for the terror waged against it and a panel discussion co-sponsored by the afore-mentioned organization. The intense criticism of the A.J.H.S. (Algemeiner, 10/10/17; ZOA.org, 10/10/17) compelled its board to cancel the two events and issue this statement: “While the programs themselves may have merit, they do not align with the mission of the A.J.H.S.” (NYT, 10/12/17) One might add, “nor does the appointment of David N. Myers.” We are sure that the founders of the Center for Jewish History never intended it to become a platform or venue for bashing Israel.

“This is not a political nor religious issue,” stated Richard Allen, one of the event organizers and founder of the JCC Watch. Allen said something wasn’t adding up after he had been reading the articles written by liberal Democratic political consultant Hank Sheinkopf, public relations executive Ronn Torossian, international consultant George Birnbaum and many others. He also saw the scheduling of programs that did not make sense.

He did something most of us never think of. Before giving donations, he researched and found David Meyer’s appointment had been connected to the issues of concern.

Organizations like the Zionist Organization of America, Americans for A Safe Israel and Jewish Defense League got involved. Leaders from these groups feel that they efforts have been noticed and a small victory achieved because two programs were recently cancelled.

What We Can Do

Before donating to an organization, find out more about who is involved and how money raised in fundraising campaigns is spent. In this case, we can’t blame other organizations or leadership connected to Center for Jewish History. However, we can continue to send letters, emails and phone calls to voice concerns. This practice should be followed when an issue like this is raised with other executives and board members of a federation or organization that use their power to overlap personal feelings with professional actions. We also must recognize the good most of these groups do. We as Jewish individuals can have different opinions but should figure out solutions that do not harm others and give others a reason to partake in any form of anti-Semitism. 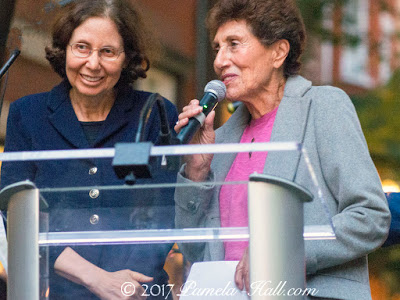 LIz Birney of ZOA and Helen Freedman of AFSI Addressing the Crowds
About the Author
Cindy Grosz is a Media Personality and award-winning Jewish Activist. Grosz is the host of Cindy’s Celebrity Corner. She can be reached at cindyscorners@gmail.com
Related Topics
Related Posts
Comments
Advertisement