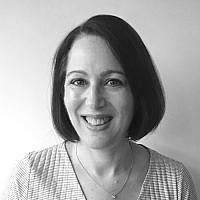 The Blogs
Amanda Bowman
Apply for a Blog
Please note that the posts on The Blogs are contributed by third parties. The opinions, facts and any media content in them are presented solely by the authors, and neither The Times of Israel nor its partners assume any responsibility for them. Please contact us in case of abuse. In case of abuse,
Report this post.

Tottenham defender Danny Rose has spoken out, revealing he cannot wait to walk away from football because he is so disgusted by the racism that blights the game – and the inadequate response of the authorities to it.

As the representative body for British Jews, we want Danny to know he has our solidarity.

Danny has chased his dream of being a professional footballer since childhood. For someone of his calibre – having risen through the ranks and been capped 26 times for his country – to reach such a devastating conclusion is very telling. Football has a racism problem, and it must be rooted out.

However, the problem of racism is not confined to football stadiums.

Black people in Britain still face shameful discrimination in almost every facet of life. The Guardian’s recent “Bias in Britain” report highlighted some shocking findings. 38% of BAME people said they had been wrongly suspected of shoplifting in the past five years. One in four felt they had been stopped at airport security or customs because of their ethnicity. When enquiring about flatshares, the name David received 25% more positive responses than the name Muhammad. And, according to the EU’s agency for fundamental rights (FRA), Racism against black people in the EU remains ‘widespread and entrenched’.

Just like the Black community, Jews know what it is like to experience hate, racism and division in society and we carry our history with us. So, when it comes to football, we say there must be zero tolerance to bigotry.

Whether that’s the racism faced by Danny Rose, the abuse aimed at Manchester City’s Raheem Sterling, or – as we have been very outspoken about – the antisemitism which manifests itself in singing and chanting at matches, there is no acceptable level of hate in sport. Danny Rose was subjected to fans making monkey noises in Montenegro. Meanwhile, at Tottenham games where Danny has been playing, rival fans have aimed offensive chants about “Yids” at Spurs’s Jewish supporters, sung songs including “Spurs are on their way to Auschwitz” and made hissing noises to mimic gas being released into gas chambers.

So, what can be done? First and foremost, footballing authorities need to take the lion’s share of responsibility. The Board of Deputies is fully behind initiatives such as Show Racism the Red Card, and Chelsea’s Say No to Antisemitism campaign launched this year. But there is still much work to do. We agree with Danny that the fines handed out for racism are often far too small, and the punishments too flimsy. Therefore, we are glad to see the steps the Government is taking, for example in proposing a review of football’s current sanctioning regime.

We stand firm in its opposition to all forms of discrimination. Hate crime against any community – whether online, on public transport, in politics, or on the football field – is a scourge on our society and an affront to the values of tolerance, diversity and equality.

We won’t stop speaking out until football proves itself to be part of the solution, rather than part of the problem.

About the Author
Amanda is a Vice President at the Board of Deputies and represents The Hampstead Synagogue on the Board. She was one of the first cohort of the Dangoor Senior Leadership Programme, run by LEAD
Related Topics
Related Posts
Comments