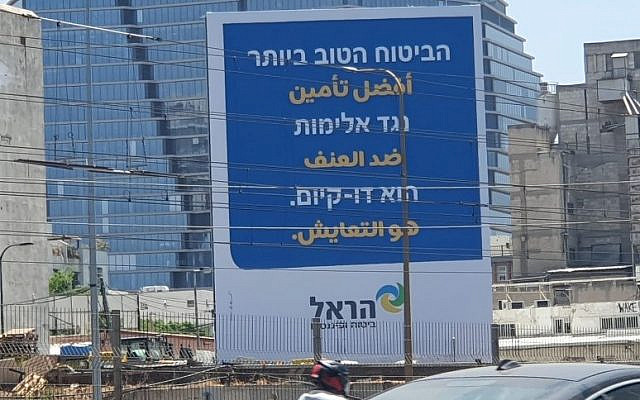 “The greatest insurance against violence is co-existence.” Harel insurance company billboard in Hebrew and Arabic over Tel Aviv highway.

Looming above the Tel Aviv highway was a newly installed billboard, with the message, in alternating lines of Hebrew and Arabic, white and yellow lettering vivid against a bright blue background: “The greatest insurance against violence is co-existence.” It was from Harel, one of Israel’s leading insurance companies, and a clear response to the horrific violence which erupted on Israel’s city streets over the past several weeks. The violence has played out along Jewish-Arab lines. But so has the response.

Countless Jews and Arabs from across the country and the mainstream of both communities have helped each other, condemned the violence, and stood staunchly for coexistence. This is a sharp turning point in what has been an ongoing struggle between those in Israel advocating for greater exclusion versus inclusion of the roughly 20% Arab minority. We can either stand back and allow Jewish-Arab relations to spiral into something potentially far worse than what we have just witnessed, or use this as an opportunity to begin deeper healing and constructive change.

The last few weeks’ violence between Jewish and Arab citizens on the streets of multiple Israeli cities was unprecedented. The scenes of raging mob attacks, bloodied bodies, shattered glass, twisted metal, flaming buildings and holy sites, captured in countless photos and videos, have shocked the public. Arabs and Jews were both victims and perpetrators. Each has legitimate reasons to blame the other side, but no less to agonize over deeds carried out by their own side. Many have asked if this is not a portent of civil war.

However, the response to the violence has been just as unprecedented. For every report of horrific abuses, there were as many stories – if not more – of Jews and Arabs who helped each other, sometimes in the midst of the violence and at great risk to themselves, or after the violence, providing support and sharing mutual grief. Thousands of civilians from both communities, immediately rallied, organizing protests against violence at major highways and intersections on multiple occasions.

Just as unusual is that major businesses also took a stand. Harel was hardly an outlier. Cellcom, one of Israel’s leading cellphone companies held a one-hour pause in service to protest the Jewish-Arab violence. A consortium of more than 150 of Israel’s top VC funds and startups issued a striking call, that the “silent majority must disrupt the status quo, take back the agenda from the extremes in Israeli society,” and appeal for equality of opportunity, before the law, and from political leaders. And in the health sector, where Jews and Arabs work together as equals more than in any other sector, there were several joint initiatives condemning the violence and calling for healing and constructive action.

This response from across the mainstream should not be taken for granted. When Cellcom’s announcement came out, far-right MKs and settlement leaders denounced Cellcom as disconnected from the Israeli public; MK Itamar Ben Gvir accused them of “identifying with terrorists”, implying Arab citizens. They called upon their constituents to change service providers; Cellcom stock fell 2%.

This was not an atypical response. With each round of Gaza-Israel clashes, the Jewish public has generally condemned any expressions of concern or empathy for the Arab Palestinian side, whether in Gaza, the West Bank or within Israel’s borders regarding fellow citizens, and whether from Arabs or Jews. Likewise, efforts fostering Jewish-Arab or Israeli-Palestinian cooperation have increasingly been condemned as traitorous by the right. Times of war escalate the Jewish public’s fears that Arab citizens could act against Jews or the state, thus exacerbating monolithic us-them thinking. This over-simplifies and constrains the emotional and intellectual space needed to understand each other’s concerns and devise constructive approaches. Public efforts, whether rallies or individuals in media, academia or other spheres speaking up, risk vitriolic condemnation, boycotts, firing and verbal and sometimes even physical attacks.

And yet this time – even with missiles flying by the hundreds from Gaza and half the country in air raid shelters, and not just in the South to which the country has become “accustomed,” but even in the heart of Tel Aviv – the inter-communal violence on city streets shocked people into breaking with these social strictures. Cellcom responded to the complaints from the right that their workers are “of all religions and faith” and stand “shoulder to shoulder”, equally at risk in these times, and that theirs was “a call for coexistence.” They expressed clear support for Israel’s efforts to defend itself against Hamas, but did not step back from their core motivation. This kind of public statement from a major mainstream company defending coexistence and standing up for all citizens even in times of war is norm-breaking. And the brouhaha did not deter others from their public stances.

The attacks between civilians on Israel’s city streets do not come out of the blue, but represent a sharp escalation in an ongoing struggle. Two opposing trends have been developing over the last decade or so: one towards greater inclusion and legitimization of Israel’s 20% Arab population; the other towards greater exclusion and delegitimization.

On the one hand we’ve seen measures to limit the rights and sense of legitimacy of the Arab minority in Israel. We’ve seen this in legislative efforts, the most widely known but not sole example being the 2018 Nation State law, which opponents criticized for undermining the status of the Arab community. Anti-Arab political rhetoric spikes around elections and points of escalated conflict – and considering that Israel has experienced one or the other almost annually for most than a decade, this makes it an almost relentless stream. On a more systemic level, issues of discrimination are still significant, whether in budget allocations to the Arab sector or within the job market.

And yet, on the other hand, we also see some progress towards greater inclusion and equality. The most dramatic is measure 922, which provided a $4+ billion budget in a first-ever effort to redress systemic inequalities in the Arab sector. While there is a very real issue of underfunded schools and discrimination in hiring, there is also an upward trend in Arabs entering academia and professional jobs, resulting in a small but growing Arab middle class. And Corona provided a first-ever opportunity for mainstream Israeli Jewish society to appreciate the contributions of Arab citizens of Israel, who comprise a significant portion of doctors and medical staff, seeing them as allies and equals in battling a common enemy.

These opposing trends are playing out in Israel’s electoral politics as well. The fact that Israel has had four elections in two years is in part because of starkly differing views on issues related to the Israeli-Palestinian conflict, such as settlements and rights. This in turn affects Jewish-Arab relations and inter-communal attitudes within Israel. The issues and attendant fears have been an integral aspect in the Israeli electoral stalemate. And all of this has been greatly exacerbated by Netanyahu’s continual manipulation of these fears to his political advantage.

But this stalemate also led to a shattering of rigidly held electoral politics norms that Jewish parties will not create political coalitions with Arab parties, and Arab parties will not align with Zionist parties. Yet in these last elections Bibi reached out to the Arab sector for support, and to Mansour Abbas, head of the Islamic Raam party as a possible coalition partner. For both it was a carefully calculated move. For Bibi, to stay in power; for Abbas, to gain political leverage to address urgent needs in the Arab sector. These moves granted legitimacy to Jewish-Arab political alliances. Even if we find ourselves returning to the polls for a fifth election in the upcoming months, this seismic shift will have permanently expanded the boundaries of coalition possibilities for Arab parties.

Whether out of pragmatism or ideology, reluctantly or willingly, more and more Jewish and Arab citizens of Israel are realizing that we can’t advance without working together. We are in permanent relationship with each other. But how – and who – will determine the character of that relationship? Will we allow begetters of hate and violence to dictate our future?

The national identities and communal needs of the two sides for safety, security and the ability to flourish are very real. But the real us-them divide is not between Jews and Arabs, or Israelis and Palestinians per se. It is between those who are working to find ways for us to live together in mutual acceptance, care and equality; and those who refuse to accept the other side, whether out of ideology, fear, hate or blindness, and believe that sufficient force will make the other side give up and give in.

The pathway of force and violence is well-worn, and the status quo often feels easier and less scary to maintain. However, May’s events provided a horrifying glimpse at where this risks taking us. This has instilled courage in more people to stand up for the pathway of working together for our mutual wellbeing. The upcoming government must take responsibility for these issues. But it is an issue for which each of us – whether as citizens, leaders in our various sectors, or people who care – has both responsibility and agency.