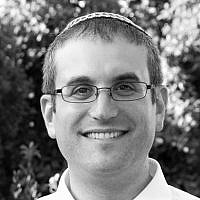 The Blogs
Rafi Eis
Apply for a Blog
Please note that the posts on The Blogs are contributed by third parties. The opinions, facts and any media content in them are presented solely by the authors, and neither The Times of Israel nor its partners assume any responsibility for them. Please contact us in case of abuse. In case of abuse,
Report this post.

In a challenging  essay, Yigal Gross argues that we can solve the day school affordability crisis by having students attend public school in the morning followed by afternoon Judaic learning at the local day school.  While he does not put a number on it, such a model would probably be about 40% less than current tuition- an incredible savings indeed!

Throughout the essay, the reader feels his angst as he imagines having to pay high school tuition for his children that will likely be at least $30,000 per child, per year. He is correct that we need to find solutions to this crisis and that too many organizational efforts have led to close to zero results.  Tuition is higher now than it was 9 years ago when affordability became a central issue in the Jewish community.

At the most basic level, the affordability crisis is not an educational crisis; it is an economic crisis. The economic challenge is not central to what school is about, but rather it is a critical secondary issue to the function of our schools.  This means that we should do whatever we can to keep education at the same level while investing our efforts in cutting costs and raising revenues.  My own energies have been focused on bringing Blended Learning to Jewish day schools to cut costs, but it is primarily because I believe in the educational value of standards and instantaneous data analysis in helping teachers educate.

Mr. Gross essentially proposes that American Jews return to the Talmud Torah model that saw its heyday in the first half of the 20th century, where students would go to their local public school in the morning and then go to their local synagogue for lessons in Judaic studies.  Dr. Jack Wertheimer thoroughly documents the failure of the supplementary education model.  While Mr. Gross proposes a better version of the supplementary school model, his Talmud Torah 2.0 idea will suffer from the same devastating shortcomings:

In his presentation, Mr. Gross makes a number of analogies and arguments that misrepresent the nature of Jewish day school:

Making Jewish day school affordable is a holy endeavor that lacks an easy or obvious solution. Keeping Jewish education at its current level, and figuring out ways to make it better is our first priority; making it affordable is a close second. As we go through this uncertain process of making Jewish education affordable, we need to remember that Jewish education plays such a central role in our religion that as God describes his reason to distinguish Avraham, he states, “For I have singled him out, that he may instruct his children and his posterity to keep the way of the LORD by doing what is just and right” (Genesis 18:19).

About the Author
Rabbi Rafi Eis is the Executive Director at the Herzl Institute.
Related Topics
Related Posts
Comments