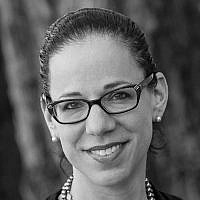 Israel is the most significant question facing the Jewish People today.

In a famous essay called “Kol Dodi Dofek – Listen, My Beloved Knocks,” based on a 1956 Israel Independence Day address, Rabbi Joseph Dov Soloveitchik, The Rav, taught that the rebirth of the State of Israel augured the revival of a Brit Yiud, a Covenant of Destiny. The Rav saw Israel as an opportunity for the Jewish people to become actively engaged in shaping our future, rather than only responding to our past.

But today, Soloveitchik’s notion of Israel as the historic opportunity for the Jewish People to rise to the call of the future with a new consensus about our shared sacred purpose is, while inspiring, a mere aspiration. In fact, one might argue that while Israel unifies the Jewish community in times of crisis, on an ongoing basis its complex realities often confuse, distance and divide world Jewry.

No single aspect of the Jewish reality today challenges Jewish peoplehood and the potential for actualizing a Covenant of Destiny more than the realities of the State of Israel. Specifically, the future of the Jewish people will be determined by the answers to the following three big questions:

Can Jewish women play an equal role in Jewish life in Israel, including in the religious public sphere? Events of the last several years have indicated that this is indeed still a question in the Jewish-democratic State. Can women be sent to the back of the bus, forced to create secondary spaces and institutions, and made absent from the Public Sphere? Indeed for Israel and for Judaism, this “truly is,” as Hilary Clinton said about the role and rights of women in the world “the unfinished business of the 21st century.”

Is non-Orthodox Judaism legitimate in Israel? Can the Jewish egalitarian movements (Reform, Conservative, Reconstructionist, Renewal and Secular Jewish and all other non-Orthodox groups) have equal representation, equal access, and equal resources in Israel? Or will they continue to be second-class Jewish citizens receiving fewer resources and their rabbis’ conversions and marriages not recognized by an establishment that recognizes only one form of Jewish identity and practice even as other government agencies recognize and support our work?

Do you matter? Do the realities and Jewish identity and practice of Jews throughout the Diaspora matter when answering the first two questions in Israel? Should North American Jews continue to focus on Israel as the homeland of the entire Jewish people, even when the Judaism of more than a million of these Jews is rejected – if not completely misunderstood – thus allowing an ultra-Orthodox minority to continue to control many aspects of Jewish Israeli political life? And conversely, should the lived realities of Israelis and the sensitivities of its various populations matter to world Jewry? To what extent?

The complexities of all three of these questions are powerfully clear in the case of Women of the Wall. Women of the Wall is a group of Jewish women – Orthodox, Conservative, Reform, Renewal, non-denominational – who have been gathering every Rosh Hodesh (the first of every Hebrew month) for 26 years in order to pray and read Torah and celebrate together at the main Kotel. But the arrests and detentions of these women and the confiscation of their tallitot (prayer shawls) by the Israeli police have gained increasing attention throughout the Jewish world and in the general media as well. While a court decision gave them and egalitarian Jewish groups the right to pray in a separate area near Robinson’s Arch in the Davidson Archeological garden, these women – and now thousands and thousands of supporters – are still seeking the right to pray at the main Kotel, to wear tallitot and read from the Torah, there. They want equal access to one of the most sacred sites for the Jewish people. They want to pray and celebrate there, just as men do. For two hours, once a month.

While I have, over the last 25 years, participated in their powerful prayer services, I have also been a public critic of their tactics and the attention that their efforts have received; don’t we have bigger problems? Don’t we have so many more urgent priorities as Israelis, as women and as Jews?

Today my position has changed. While I continue to work on many other pressing concerns I have come to understand that the debate today regarding Women of the Wall is one way that the Jewish people are asking the three core questions of time, three questions of ethics and leadership. I now better understand why this originally very small group of women has gained so many supporters throughout the world: because the Kotel, the “Wailing Wall,” is not another issue of Israel struggling between being Jewish and democratic. The Kotel is about Jewish Peoplehood. It pulls at the hearts and minds and souls of Jews over time and space.

The liberation of the Kotel in 1967 symbolized finally coming home to Jerusalem as a free people. Jewish women want to be fully free and at home too. The Kotel symbolizes for World Jewry the collective identification with Jerusalem of Jews throughout the world. It does not and cannot belong to the Orthodox alone, because it belongs to the Jewish people. The paratroopers of 1967 liberated it for the whole Jewish people – as they continue to declare publicly – not just for the Orthodox.

By preventing women from praying there and by confiscating their prayer shawls, the Israeli government is risking the alienation of thousands of otherwise very committed Jews to the State of Israel. Shame on all of us if we let that happen.

In a newspaper interview some time ago, when asked about Women of the Wall, I suggested a time-share solution. I was, I thought being somewhat silly. I even said to the interviewer that Women of the Wall should have the Kotel on Monday, Thursday, and Saturday mornings and the Orthodox men could have it all the rest of the time. Of course I was kidding, but the interviewer printed it, and upon reiterating it and discussing it with very senior rabbinic and government authorities and lay leaders and philanthropists, I and many others have come so see some kind of time-sharing as a real possibility, because more equitable and sustainable solutions must be considered.

When asked about Women of the Wall, Natan Sharansky, the head of the Jewish Agency, responded: “It is easy? Not. But we Jews chose to be not-easy people and to live in a not-easy place, and to do not-easy religion.” And who knows better than Sharansky about the power of Jewish peoplehood?

We know that the situation in Israel isn’t easy. But it’s more than just “not-easy.” The situation is not tenable. Many Diaspora Jews cannot possibly feel fully at home in Israel if they are denied the powerful ritual experiences and collective resources given to other (i.e., Orthodox) Jews. If the status quo continues in such areas, it should not surprise us if even more Jews, both women and men, feel even more disconnected from Jerusalem, and do not feel that they can call Israel their homeland.

The denial of equal access and equal resources to women, and for that matter liberal Jews, will only further distance them from Israel because that lack of access symbolizes the extent to which they are rejected for the very spiritual yearnings that bring them to Israel in the first place.

Making the State of Israel the spiritual possession of one segment of the Jewish people undermines the most important instrument for building Jewish collective consciousness today.

A Heart of Many Rooms

Despite the challenges, Israel, with her daily trials and triumphs, is potentially one of the biggest sources for building Jewish peoplehood and therefore a sense of shared destiny. But in its often crumbling complexity, it may ultimately become a cause of ongoing divisiveness and the breakdown of Jewish peoplehood. Thus each dilemma is an opportunity for leaders to engage toward new possibilities…toward a new covenant.

If more leaders are braver, more concerned with Jewish peoplehood and less with personal political power, then they will be more likely to reach agreement regarding the core issues of Jewish peoplehood. Such courage will tap the potential of the Covenant of Destiny of the Jewish people, a destiny in which all Jews can fully embrace shared purposes and shared sacred spaces.

About the Author
Rabbi Rachel Sabath Beit-Halachmi is a Senior Fellow at the Shalom Hartman Institute and teaches at the Hebrew Union College-Jewish Institute of Religion in Jerusalem. For nearly two decades she has directed national and international leadership study programs for rabbis and lay leaders of all denominations at the Hartman Institute and previously at CLAL: The National Jewish Center for Learning and Leadership. Ordained at Hebrew Union College-Jewish Institute of Religion in New York, Sabath Beit-Halachmi also earned a doctorate at the Jewish Theological Seminary and served (non-denominational) Congregation Shirat HaYam on Nantucket Island for thirteen years. She is the co-author of Preparing Your Heart for the High Holidays, Striving Toward Virtue, and has published numerous articles on theology, Zionism, and gender.
Related Topics
Related Posts
Comments