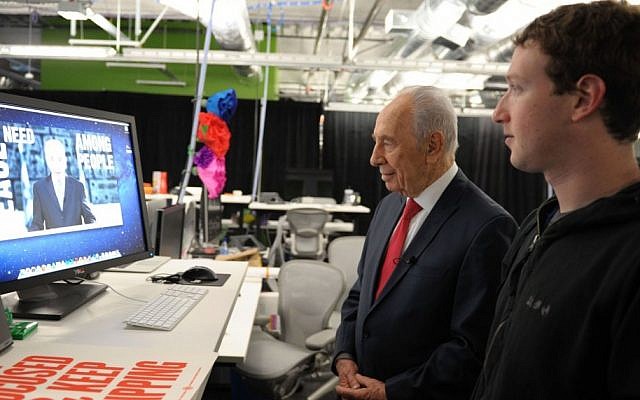 Jews are the ultimate disruptors, and I mean that in a good way. Lately, we hear a lot about disruptive technologies: advances that will transform life, business, and the global economy. Well, it occurs to me that this is what the Jews have been doing since antiquity. We are never satisfied with the status quo and always seek to improve and change it.

Before the Jewish disruption of the pagan world, there was little to restrain the bloodthirsty sacrifices that primitive peoples used to placate their gods or the horrible treatment of slaves. The Jews introduced ethical monotheism and the Ten Commandments, in which God proscribed the worship of any other deity and forbid the worst acts of mankind. Through the dispersion of the Jews in the Diaspora following the Babylonian destruction of the Holy Temple (586 BCE), the Jewish religion spread throughout the ancient world, introducing its moral values, including repairing the world: tikkun olam.

The first two Jewish disruptors of the fabric of life in the ancient world were Abraham and Moses. What other iconoclasts have the Jews produced? Obviously, Jesus must be counted as one of the world’s most influential personalities. Although Jesus was born a Jew, lived a Jewish life, and died a Jew, his followers started a new religion from his teachings, making Christianity the most widespread religion ever. Though not all Christians even know that Jesus was Jewish, there are many tenets of the Christian faith that exist because of their Jewish genesis. Jesus was the third great Jewish disruptor.

Two of the most influential philosophers were Jewish: Maimonides and Spinoza. Maimonides lived in Spain, Morocco and Egypt during the Middle Ages. He was a rabbi, philosopher, astronomer, scientist and doctor whose teachings reverberate until today. Spinoza was a 17th-century lens grinder who lived in Amsterdam. His rationalist philosophic teachings caused him to be excommunicated by the rabbis, but Spinoza’s influence on modern philosophy is very significant. Both were clearly disruptors of the societies they lived in.

Karl Marx, of rabbinical ancestry, was born in Prussia in 1818, just two years after his Jewish parents converted to Christianity, a common practice for Jews who wanted to succeed in gentile society. He became a philosopher and revolutionary socialist and published The Communist Manifesto and Das Kapital, the foundations of the socialist and communist upheaval of the 19th and 20th centuries. Hundreds of millions of people lived under Communist regimes based on his teachings, even more than practiced Christianity. For this, Marx is one of the “greatest” Jewish disruptors of all time.

Sigmund Freud, born in 1856 in Austria to Jewish parents from Galicia, first became a well known neurologist. He is known today as the father of psychoanalysis. One of the greatest thinkers of his era, “[Freud’s] creation of psychoanalysis was at once a theory of the human psyche, a therapy for the relief of its ills, and an optic for the interpretation of culture and society.” Despite refutations of some or even most of Freud’s work, his contributions to medical science are huge. He is certainly a disruptor who changed the way people perceive themselves and others.

Theodor Herzl was born in 1860 into a well-off family of assimilated Budapest Jews. As the Paris correspondent of one of Vienna’s leading papers, Herzl was shocked by the rampant anti-Semitism which swept through France in the wake of the Dreyfus Affair. He concluded that the Jews must have their own state. Though he wasn’t the first to advocate political Zionism, Herzl was the first who devoted himself to making it a reality. After he convened the First Jewish Congress in Basel in 1897, Herzl literally worked himself to death trying to convince world leaders of the need for a Jewish State. There is no other instance of a people reviving their homeland and language after 2,000 years, not to mention the fact that Israel has rapidly become one of the world’s most significant nations, a disruptor in its own right.

Among scientists, Albert Einstein must be counted as the most eminent and the biggest disruptor of all, whose theories are being proven more than one hundred years after he published them. Born in Germany in 1879 to Jewish parents, Einstein is considered one of the greatest physicists and cosmologists of the 20th century. His most famous theory, on relativity (1915), is understood (or more likely misunderstood) by nearly all educated people. Though only a clerk in a patent office, Einstein’s understanding of the universe knew no bounds. On the practical level, he clearly recognized the danger of the rise of Hitler, fleeing Germany for the United States in 1932, where he later was instrumental in the development of the atomic bomb. Einstein had a great love for the new State of Israel, but he turned down the offer to be its president. It’s hard to think of someone who deserves the title of disruptor more than Einstein.

Who will be the greatest Jewish disruptor of our time is not yet known. There are plenty to choose from: Sergey Brin and Larry Page (Google); Michael Bloomberg (Bloomberg media); Mark Zuckerberg (Facebook); Larry Ellison (Oracle); Michael Dell (Dell Computers); Bob Dylan (musician); Larry David/Jerry Seinfeld/Jon Stewart (satirists); Jerry Siegel/Joe Shuster (Superman); Stan Lee (Spiderman); Robert Aumann (game theory); too many other Nobel and Fields Medal [mathematics] winners to mention; plus all the others whose names we don’t know yet but who are currently disrupting their areas of expertise.

Judaism is one of the most disruptive movements ever in human history. Jews are at the forefront of many sweeping undertakings, for the good and for the bad. Even if they weren’t raised Jewish, the Jewish heritage of the disruptors mentioned above was significant in their world view. Jews are extraordinary, by the very definition of the word. What would the world be like without the Jews?