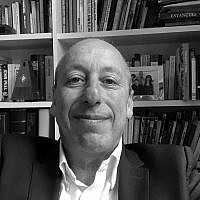 The Blogs
Sam L. Jacobs
Apply for a Blog
Advertisement
Please note that the posts on The Blogs are contributed by third parties. The opinions, facts and any media content in them are presented solely by the authors, and neither The Times of Israel nor its partners assume any responsibility for them. Please contact us in case of abuse. In case of abuse,
Report this post.

Last week I led a fascinating Jewish history walk from one side of the old Roman city of London to the other. Across the “square mile” as it were. From Newgate to Aldgate, west to east. And on reflection it turned out from the “Emblem of Evil” to the “Gates of Heaven”.

Those familiar with London might recognize the gates reference as the full name of the magnificent, grand Bevis Marks synagogue which dates back to 1701. And the Evil reference is to the former Newgate prison. It was at the Old Bailey/Newgate site where we started our walk. Dickens wrote about Newgate and Henry Fielding called it the “emblem of evil”.

Whilst I have led many walks as a City of London guide it’s true to say that on each walk I learn something new, often from the participants.

On this walk we remembered the story of the medieval London Jews who were held in the Newgate prison for a ransom of 20,000 marks. This was prior to the 1290 expulsion by Edward 1st.

One visible wall remains of Newgate  – it is still imposing and was the site of the last public hanging in the UK. Newgate is associated with the bizarre story of Lord Gordon , a rabble rousing anti – Catholic bigot, who converted to Judaism in the 18th century , was circumcised, lay tefillin every day and kept kosher. He died of typhoid which was rampant in the prison. Also in Newgate was the infamous fence of stolen goods Ikey Solomon from the East End – whose arrest, escape and escapades captured the imagination of many. It is said that he was the model for Dicken’s Jewish character Fagin.

Nearby to Newgate is the area where the medieval community had its Talmud scholars, cemetery, and Great Synagogue. Most remarkable is the 12th century Mikve found in Milk Street now on display at the London Jewish Museum. Even two of the Churches still standing have the word Jewry in their names.

One question comes up in a city in which 1 million Roman objects have been found – were the Jews here with the Romans? Well we have Judean wine vessels for the soldiers which have been found, and amulets with Hebrew prayers in Greek inscribed. So the jury is out on that question, but there certainly was an influence from the then Judea.

Other key city figures we discussed included Dr Rodrigo Lopez, Queen Elizabeth 1st’s doctor,  from the 17th century who was accused of being a Spanish spy and a “very Jew” and was hung, drawn, and quartered having been sentenced at the London Guildhall. He remains the only Royal Physician to have been executed.

Strolling through the city there are pointers to Disraeli the first Prime Minister of Jewish Origin and the Lord Mayor’s house where in 1855 David Salomons lived when he became the first of twelve Jewish Lord Mayors.

The first Jew to shake a British monarch’s hand was Daniel Mendoza the man who revolutionized boxing and the image of the British Jew in the late 1790s, whose boxing gym was at the back of the Bank of England.

Other places we visited included the Royal Exchange and the beautiful Rothschild Bank – which have numerous Rothschild stories and firsts in the British establishment.

As we walked to the east of the London city centre we arrived at the site of the first synagogue established after the resettlement of Jews in Britain in 1656.

And we finished our tour with the Wren like building of Bevis Marks and discussed the life and times of Moses Montefiore who would give a gift to young couples getting married and double it if it was a mixed Ashkenazi Sephardi wedding.

The City of London holds many more stories of Jewish interest. In a future blog we’ll look at some of the other sites in London and their Jewish related stories.

About the Author
Sam Jacobs is a qualified City of London guide and a specialist in the Jewish history of the City of London and Whitechapel and leads regular walks in the area. In the past he was a Jewish student and Jewish Labour leader in the UK and Europe. He has been in high tech for 40 years and is currently a trustee of two major UK charities on identity and integration.
Related Topics
Related Posts