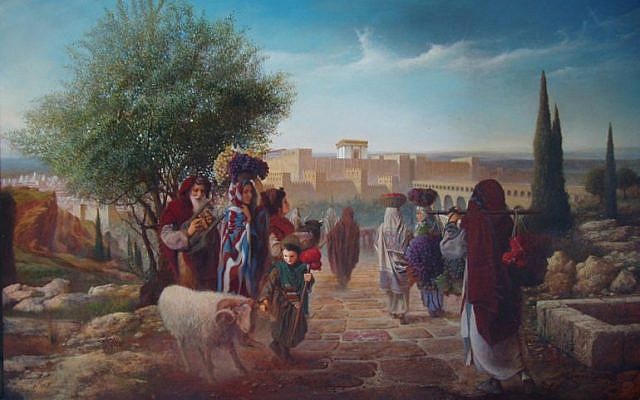 Jews and Judaism form a peculiar phenomenon which is found nowhere else in the world; Jews are a nation and Judaism is a religion, yet these two distinct identities are inseparably and uniquely intertwined. Taking a look at the various countries around the world we will find nations that contain many different religions and religions whose believers are not confined to one geographical location. But what is unique about Jews and Judaism is that it combines nationalism and religion together. On the one hand, Judaism contains all of the trappings of religious ritual and ceremony; on the other hand, it contains a national homeland– the Land of Israel—along with a rich and diverse national history and heritage.

This fascinating duality has been explained by Rabbi J.B. Soloveitchik one of the foremost Jewish thinkers of the 20th century. He expounds on the idea of the two covenants made between God and the Jewish People –the Covenant of Fate and the Covenant of Destiny. The Covenant of Fate was born in the land of Egypt in the story of the Exodus when God said, “And I shall take you unto me for a people, and I will be to you a God.” (Exodus 6:7) This covenant expresses the camaraderie and interconnectivity of the Jewish nation in a historical and national context and reflects itself in many ways. Firstly, the Covenant of Fate signifies that an individual Jew will not, for better or for worse, be able to escape the fate of his people. As Rabbi Soloveitchik writes, “When the Jew in the cave is attacked, the security of the Jew standing in the courtyard of the King is also jeopardized.” We have seen all too well this example of national fate in our own time with the destruction of European Jewry, where the annihilator made no distinction between rich or poor, educated or simple, religious or secular. All Jews shared a part in the Covenant of Fate. But positively speaking, this concept of a collective fate also leads to shared empathy, and when one Jew suffers “I am with him in his distress.”(Psalms 91: 15) The knowledge of this shared fate arouses itself in feelings of shared responsibility and shared action for the benefit of each other and the nation as a whole.

On the other hand, the Covenant of Destiny does not bind the Jewish people to one another in a national or historical way but rather attaches them to their Creator through the religious and spiritual practices of Judaism ( Kol Dodi Dofek pg55-65). This was brought forth at the revelation at Sinai, where it is written, “And he [Moses] took the book of the covenant…” (Exodus 24:7). This Covenant of Destiny is no less important than the Covenant of Fate in ensuring the continuation of Jewish national life. Rabbi Jonathan Sacks, former Chief Rabbi of the British Commonwealth, explains that during the 2,000 years of Jewish exile from their homeland during which the people were dispersed throughout the world and seemingly had no relation to what we would call a People (in the technical sense), they continued to see themselves as one united nation. In explanation of this, he quotes Rabbi Saadia Goan, who lived during the 10th Century, “Our nation is only a nation in virtue of its religious laws”. Rabbi Sacks writes, “Wherever Jews were, they kept the same commandments, studied the same sacred texts….These invisible strands of connection sustained them in a bond of collective belonging that had no parallel among any other national grouping.”(Future Tense pg 34) Throughout Jewish history, there has been an up-and-down relationship whereby the Covenant of Fate would take the forefront to unite us and at other times the Covenant of Destiny would be the more dominant force. But, as Rabbi Sacks writes, “It is that double bond that has held the Jews together. When one failed the other came to the fore”. (Future Tense pg 48)

The idea of the Covenant of Fate and the Covenant of Destiny also seems to emerge at the beginning of Parshat Ki Tavo, which opens with the command to the Jewish people to bring the Bikkurim (First Fruits of the harvest) to the Temple in Jerusalem. The verses states, “It will be when you enter the Land that your God gives you as an inheritance, and you possess it and dwell in it, that you shall take of the first of every fruit of the ground that you bring in from your Land that God gives you, and you shall put it in a basket and go to the place which the Lord your God, will choose to make his Name rest there.”(Deuteronomy 26:1-2). According to the verses, in addition to bringing the fruits to the Temple the owner of the produce would also recite a declaration when he handed over his fruits to the Kohen (Priest). He would say, “I declare today to Hashem your God, that I have come to the land that Hashem swore to our forefathers to give us…An Aramean tried to destroy my father. He descended to Egypt and sojourned there few in number, there he became a nation-great, strong and numerous. The Egyptians mistreated and afflicted us and placed hard work upon us. Then we cried out to Hashem the God of our forefathers …He took us out of Egypt with a strong hand and an outstretched arm…He brought us to this place and he gave us this land… (Deuteronomy 26:3-9).

At first glance, this whole declaration is a bit of an oddity and altogether unfitting for the ritual at hand. On such an occasion we would assume to find words of thanks to God for the produce which has ripened, however, the declaration instead recounts the history of the Jewish people from its inception until their entering into the Land of Israel. Rav Elchanan Samet asks the obvious question; what is the connection between the bringing of the first fruits and this historical overview of the Jewish People? In answer, he cites a fascinating idea by Martin Buber, in his article “Bikkurim”(First Fruits). Buber writes,

“Gifts offered to the gods from the first of the harvest are a familiar phenomenon of all cultures… as are prayers… thanking the gods for the blessing of the land… and asking them to ensure that the land remains fertile. But of all these types of prayers in the world, I know of only one in which the worshipper praises God for having given him a LAND… Even in later generations, the bearer of the bikkurim is not to say, for example, ‘My forefathers came to the land,’ but rather, ‘I have come to the land.’ Here the two entities addressed by the Torah, the nation and the individual, come together. ‘I have come to the land’ means, first and foremost, ‘I – the nation of Israel – have come to the land.’ The speaker identifies with Am Yisrael and speaks in the name of the nation. The significance of this is as follows: I testify and identify myself as a person who has come to the land…’ Every farmer in every generation of Israel thanks God when he brings his bikkurim for the land to which He brought HIM.” ( “Darko shel Mikra,” pp. 82-87)

We can, therefore, see an incredible circle of this concept. The purpose of the Bikkurim is so that every year the owner would have the opportunity to reaffirm his thanks and appreciation for having been brought to the Land of Israel and for living in connection to the very people of Israel—the Covenant of Fate. At the same time, the entire ceremony and declaration is recited in the sanctuary of the Temple – the physical home and working manifestation of the Covenant of Destiny.

These two Covenants are essential for equilibrium and harmony in Jewish life, but unfortunately, we see that this vital balance is sorely lacking in our modern day world. There is a growing disenfranchisement of Diaspora Jews with the State of Israel and a “better than thou” attitude expressed by some Jews in Israel towards their brethren in the Diaspora — this a breakdown in the Covenant of Fate. Similarly, the continued and ongoing polarization between the religious and secular public in the State of Israel and throughout the world shows that the Covenant of Destiny is in greater jeopardy than ever before.

In our times, with the loss of the Temple and the cessation of the Bikkurim, how can one practically keep the connection to the Covenant of Fate and the Covenant of Destiny alive? Rav Soloveitchik writes:

The Jew who believes in Knesset Israel(the Jewish People) is the Jew who lives as part of it wherever it is and is willing to give his life for it, feels its pain, rejoices with it, fights in its wars, groans at its defeats and celebrates its victories. The Jew who believes in Knesset Israel is a Jew who binds himself with inseverable bonds not only to the People of Israel of his own generation, but to the community of Israel throughout the ages. How so? Through the Torah, which embodies the spirit and the destiny of Israel from generation to generation unto eternity. (On Repentance, p. 137)

Through taking an active role and participating in the continued journey of the fate and destiny of the Jewish People, through harnessing the power and strength of our shared tradition, and through steadfastly nurturing a connection to our national homeland, surely unshakable bonds will unite all Jews under one banner — wherever they may be.