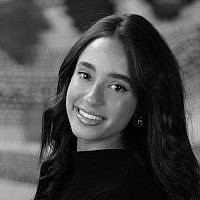 The Blogs
Kayla Hutt
Apply for a Blog
Please note that the posts on The Blogs are contributed by third parties. The opinions, facts and any media content in them are presented solely by the authors, and neither The Times of Israel nor its partners assume any responsibility for them. Please contact us in case of abuse. In case of abuse,
Report this post.

Meet Samuel Brody of Toronto, Canada. Samuel is a 29-year-old man with a pure heart who truly represents the Jewish ideal of Tikkun Olam. On one regular day, Brody took his dog for a 9 a.m. stroll. He was wearing a kippah on his head. But in an unfortunate turn of events, Brody was attacked and assaulted in his own hometown – for being Jewish. His attacker pushed him against a metal fence before yelling vile statements at him, calling him a Jew, and ending his onslaught with, “You will never take Israel…free Palestine!”

Brody has endured multiple antisemitic experiences in his lifetime, including, but not limited to 20 or 30 instances of verbal abuse. However, this was, he says, the first physical assault he has experienced. This physical attack propelled him to speak up. Therefore, Brody created a video six hours after his assault detailing the incident. He says that a large issue is “not sharing stories.” Brody refused to include the ethnicity of his attacker in his video in order to prevent hatred or bigotry of any kind. In his own words, “hate is wrong. It doesn’t matter who it is done against. Hate is always wrong.”

Samuel Brody has changed as a result of this assault. What was once an average Jewish Joe turned victim has turned into a personal activist. Usually, a person naturally reacts to an attack with loathing towards their attacker. However, in this incident, Brody adopted a new approach, and that approach encompasses all that being Jewish is supposed to be. Brody reacted to his terrible experience with introspection as well as an examination of his Jewish community.  Rather than choosing hatred, resentment and violence, he believes that we are “supposed to be a light unto the world”; but “before that, we have to be a light unto our own nation.” If we fix the issues within our own community, there will still be negative forces on the outside, but they will be weakened by the strength within.

“We have to teach our children not to hate,” says Brody.

One way in which Brody fulfills this commandment is the reptile rescue mission that he has set up in his home. He has said that people buy pets they have no means to take care of. He decided to take these pets into his home and nurture them himself to ensure that they are well taken care of.

Although Israel and the Jewish people do much to help other communities, Brody is adamant that more can and should be done within our own community. There must be more outreach, less hypocrisy and more Tikkun Olam. Each person may seek out a path of personal activism that contributes to the benefit of all.

About the Author
My name is Kayla Hutt and I am currently a student at Midreshet Moriah in Jerusalem. I have always had a passion for writing and bringing new information to light, which I will explore at NYU over the coarse of the next four years. I am one of five and a triplet with two boys. I have written for my hometown newspaper, the Great Neck Record, regarding Covid-19 and its effect on students. This past summer, I held an internship for End Jew Hatred, managing a group-chat of big name blue check influencers that fight against antisemitism and anti-zionism. It would fulfill my passion, and would be a great honor to be published in the Times of Israel, especially as I spend my year residing and studying in the holy land.
Related Topics
Related Posts
Comments