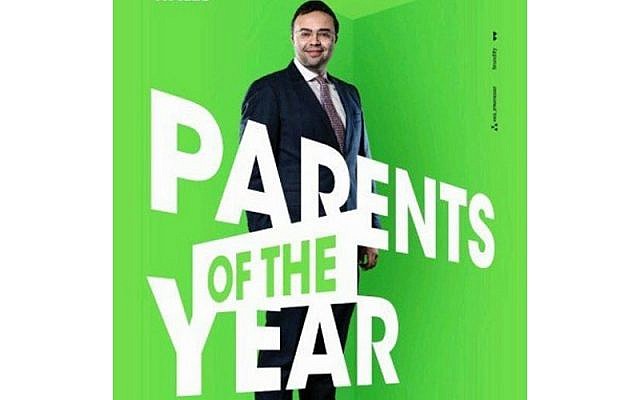 Why is only the father of these 'parents of the year' visible? (courtesy)

I spend a lot of time online. It’s one of the best ways to keep up with life, trends, and events, both here and abroad. In my opinion, the most frenetic platform for conversation, by far, is Twitter. There, people around the world discuss everything from the Women’s March and BDS to anti-Semitism and Jewish life — all in snippets of 280 characters. It’s fast, often emotionally charged, and has a tone all its own.

This erev Christmas, Ben Shapiro, the Orthodox Jewish conservative commentator, joked with his followers: ”All right, fellow Jews, since we’ll have Twitter all to ourselves tomorrow, what should we talk about?”

All right, fellow Jews, since we’ll have Twitter all to ourselves tomorrow, what should we talk about?

Rabbi Gil Student responded, suggesting a classic talmudic conundrum: If an ox gored a cow and the cow’s newly born offspring was found dead at its side, and it is not known if the cow gave birth before or after the ox gored, what should the ox’s owner pay in damages?

If an ox gored a cow and the cow’s newly born offspring was found dead at its side, and it is not known if the cow gave birth before or after the ox gored, what should the ox’s owner pay in damages? https://t.co/i6wflG01e0

I entered the impromptu beit midrash with my own suggestion. “Gored oxes are great, classic. But I suggest that we use our collective knowledge, passion & stage to address an actual problem. So, the erasing of Jewish women is becoming more & more prevalent. I’d like to see Jewish men take a stand & actively push back against it. Thoughts?” (Tweets are not editable, so my typo remains in the annals of history.)

Gored oxes are great, classic. But I suggest that we use our collective knowledge, passion & stage to address an actual problem. So, the erasing of Jewish women is becoming more& more prevalent. I’d like to see Jewish men take a stand & actively push back against it. Thoughts? https://t.co/QYfXrPgk7A

Some thought I was making light of the idea of studying Torah, but the truth is exactly the opposite. I learn Torah regularly and I believe in talmudic debate. It gives us the laws that govern our lives as religious Jews. Specifically, the order of Nezikin, to which Rabbi Student refers, deals with damages and laws determining who is responsible to pay whom when damages occur, among other matters of civil law.

And this is exactly my point — some may think of Judaism as governing their lives ritually or spiritually,  but the Talmud dedicates many, many folios to the “real-world” considerations of all kinds of damage, accidental and otherwise, that determine our levels of responsibility, compensatory damages, and so on.

And I want real, considered, in-depth talmudic debate on the issue that I call “erasing women” and its damages. I want to see screaming and slamming fists on desks as serious learners of Jewish law debate the extent of the damage caused to a businesswoman who cannot advertise with her headshot — or an overdue acknowledgment that the practice is noureshkite  (nonsense) and a call to abolish it. 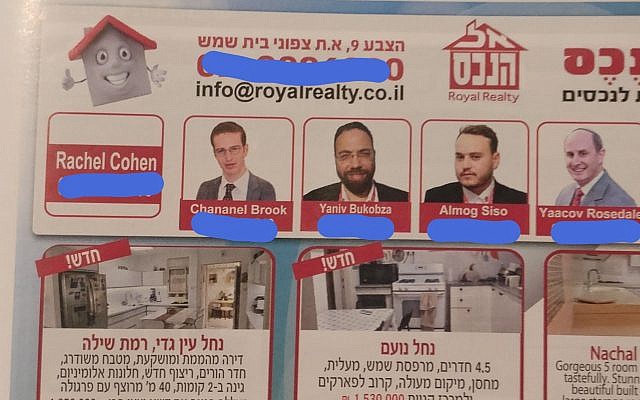 In this day and age, one does not have to be a marketing specialist to know that using one’s image engenders familiarity and trust. It helps get the client, leading to make the sale, and seal the deal. I’d like to see learners who specialize in the standard yeshiva tractates of Nezikin dedicate their learning to the application of their “shakla va-tarya” (the back and forth debate of the Talmud) to this serious manifestation of “damages” in the world today. 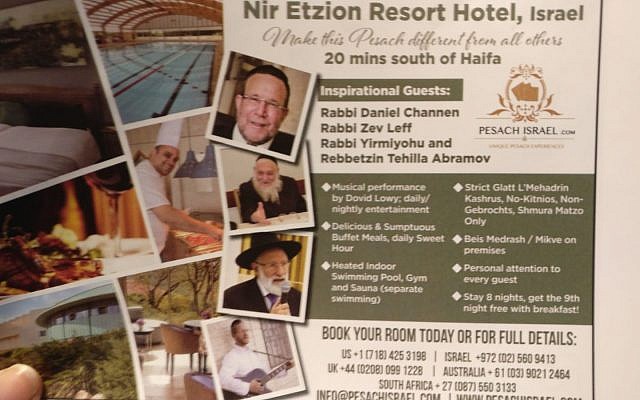 If Judaism is about studying our laws and traditions and applying them to life — which we do when we consider how a car accident is different, for example, from damages caused by an ox, whether interest may ever be charged, and how to open a new pizza place on the same block as the old one — then certainly we are not relegating Talmud study to theoretical discussions in the beit midrash. Which is why we are obligated to evaluate the damages that some of the novel, but increasingly normative, practices of contemporary Jewish society inflict on our own faithful practitioners.

The new and popular modern trend of forbidding women’s pictures in publications causes damage to a degree that, I submit, merits serious discussion by our learned community members.

Just as a contemporary beit din infers or derives or concludes litigants’ obligations in cases of torts from the sages’ discussions of oxen (and more), so too must the halachic discussion of the present day consider the damage done to women by recent policies that discriminate against them.

More specifically: It is standard practice today to include an image of oneself as a component of an advertisement for a service or a shiur. The photo enables viewers to recognize the subject of the ad, and it conveys a sense of trust. When a woman is prevented from including an image of herself in her advertisement, her ability to market the services of her business, for example, is dramatically diminished. The inadequate ad cannot draw the attention to her business that she needs, and her client list is reduced.

The publications that refuse to publish pictures of women deny female realtors, lawyers, real estate agents, Torah scholars, and more the opportunity for effective publicity. Moreover, they set the women up with a serious and inherent disadvantage in the market, given that the men in each respective profession do advertise with photos of themselves.

The policy of showing men’s faces but not women’s contradicts halacha’s requirement for fair business practices and competition. It reduces the number of clients who can discover those women’s businesses, which inherently results in a loss of income, harming the women and their families.

For those, like me, who believe in Torah and its importance in our lives, a serious conversation should be had. Moreover, traditional study of the classical tractates that deal with damages should include the principles derived there in the context of the damaging practices of today.

And while I don’t expect a Twitter conversation on Nittel Nacht (the Yiddish term for Christmas) to be a true talmudic debate, nor do I expect every yeshiva to discuss women’s images, I do expect my fellow Jews, especially those in decision making positions, who believe that goring oxen apply in modern times, to honestly discuss the damage our modern day policies cause, and I suggest we start with the phenomenon of erasing Jewish women.

As Pirkei Avot — which our Sages included in Seder Nezikin because “none is so in need of the ethics propounded in Pirkei Avot as the judges” (Rambam) — teaches: Study is not the essential thing. Action is.