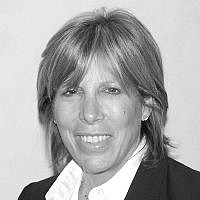 The Blogs
Linda Scherzer
Apply for a Blog
Advertisement
Please note that the posts on The Blogs are contributed by third parties. The opinions, facts and any media content in them are presented solely by the authors, and neither The Times of Israel nor its partners assume any responsibility for them. Please contact us in case of abuse. In case of abuse,
Report this post. 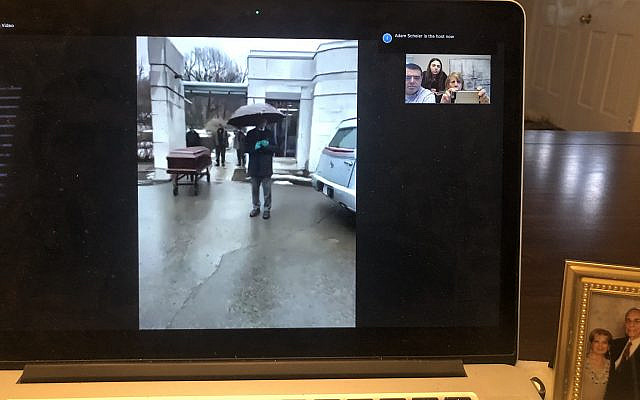 We buried our father last Sunday, discovering new meaning to loss and loneliness.  Quarantined inside our homes, far away from brothers and sisters, extended family and friends, questions flooded our minds. How would we grieve and honor our dad ? What was the meaning of shiva without the tenderness of a smile or human embrace? Who would put their arms around my mother, sitting alone in lockdown?

Comfort, we would soon learn, would come through the computer screen as Jewish rituals stretched and adapted to a world pandemic.  For those who may soon be in our situation, this could become your story too.

In our case, it was a perfectly ordinary day when my brother called with the terrible news that our beloved father had died. My beautiful dad, the kindest, most decent and principled man I know, lay down for a nap before lunchtime five weeks after his 90th birthday and never woke up.

Our first reaction was shock at losing a parent so suddenly who wasn’t ill, and sadness, for there would be no last goodbyes. Then came gratitude, knowing he died without suffering. Finally, panic, wondering how, as borders were closing around the world, we would cross from the US into Canada, a trip we’ve made hundreds of times before, to arrive in time for his funeral.

There are 350 miles separating New York and New Jersey, where my two brothers, sister and I live;  from Montreal, the city my parents have called home for the last 85 and 90 years. The fastest way home would obviously be by airplane but were airlines still flying to Canada? Could we book a charter flight? If I jumped into the car now would I be allowed to cross the Canadian border, just five hours away? What if we got into Canada but couldn’t get back again? Searching for answers we called every emergency number we could find, from the Canadian Embassy to the US State Department.

Late Friday afternoon we heard the difficult news. New restrictions meant that while we could cross into Canada we’d have to be in quarantine for fourteen days, especially coming from COVID-19 hot spots like New York City and northern New Jersey. With empathy and compassion, my father’s rabbi, Adam Scheier of the Shaar Hashomayim Synagogue, urged us to hold the funeral after Shabbat in accordance with Jewish tradition to bury the body as soon as possible. He knew there was no possible way we could attend the graveside service but offered to stream it live through Zoom or FaceTime.

And so, on a dreary Sunday morning, typical of Montreal in late winter, we watched my father lowered into the ground from computer screens three hundred and fifty miles away. Four children and their families in New York, Connecticut and New Jersey, several relatives in Ottawa, Florida and Ohio and my mother, alone in Montreal, joined together in a circle of grief miles away from the cemetery.

When suddenly, the rabbi and cantor joined the Zoom call, we saw snow on the ground from a small square on the screen. We adjusted the setting from gallery to speaker view in time to see my father’s lonely casket taken out of the hearse. We listened quietly to prayers and tehillim, gave short eulogies remotely from our living rooms and dining rooms and watched as my father’s casket was lowered into the ground.

In the midst of heartache came a moment of gratitude. There, on the screen we saw seven good people — my father’s three nephews, two of their spouses, a sister-in-law and first cousin, standing six feet apart in the pouring rain. They had left the safety of their homes to be with him. It was they who threw the earth on his casket, not with shovels for fear of spreading the virus, but with gloved hands. It was they, along with the clergy, who made sure my father wasn’t buried alone.

That night, we had the first of three virtual shivas, led by clergy from my Closter, New Jersey synagogue. Rabbi David-Seth Kirshner assured me there was meaning in doing this online and that after three or four funerals since the pandemic hit, “we, the clergy, have this.” Nevertheless, I wondered what shiva would look like without hugs and embraces? How would my mother be comforted sitting alone?

It didn’t take long for us to realize that what we lacked in human touch was made up by the faces on the screen, as many as eighty households every night from three countries and four time zones. There were childhood friends from Montreal, Toronto and Ottawa; college friends from Baltimore and Chicago, professional colleagues and friends from New York and New Jersey, and relatives from Los Angeles to Tel Aviv.

The clergy led us in Maariv prayers, scrolling pages from the siddur on our computer screens and walking us through kaddish for the first time. They gave children and grandchildren time to share memories and, for those who chose to stay online after services, a chance to say a few words to my family. Yes, it was surreal but also strangely intimate to sit shiva with people from all over the world. In the absence of hugs and embraces, we – the bereaved – found quiet comfort.

In the end, we were not denied the beauty and solace of shiva; we are just among the first mourners to see how Jewish traditions can expand and adapt in an age of social distancing. In other times and places far more dire for Jews as a people than the current pandemic, our forefathers and sisters found joy in coming together, often secretly and at great risk, to embrace Torah and tradition.

We had the opposite experience. For us, modern technology kept us safe while allowing us to expand our circle of love, find solace in prayer and grace in the faces of those who joined us on Ipads and computer screens. No one would be happier than my father, who was not adept at social media but surely, was watching from a grander platform. May his beautiful soul and memory be a blessing forever to all who knew and loved him.

About the Author
Linda Scherzer is Director of the Community Relations Committee, the government affairs and Israel advocacy wing of The Jewish Federation of Greater MetroWest, NJ. She is also Director of Write On For Israel/NY, a project of The Jewish Week of NY, which trains high school students to lead the pro-Israel movement when they get to college. A former Mideast correspondent for CNN, Linda covered the first intifada, Gulf War and Oslo peace process.
Related Topics
Related Posts
Comments