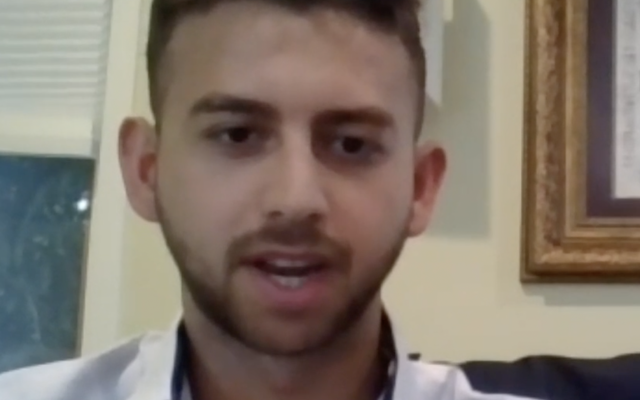 Eli Meron, The Wheatley School Graduate Who Used His Voice To Speak Up Against Injustice. Credit: Shahar Azani

Casual hatred is the worst kind. Sometimes it sneaks up on you unexpectedly. It’s dressed casually, nothing too fancy, only to make a brief appearance, but leaves an indelible mark.

Last June, the Wheatley School on Long Island held its auspicious graduation ceremony. It was to be a celebratory event at the end of a challenging year – academically, socially, and health-wise due to the implications of the Covid19 pandemic. The students and their families were looking forward to taking part in the joyous occasion, launching them into their adult lives, ready and eager to take the next step. Together with their families, the students marched onto the field, put on their smiles and dressy gowns, clearly unprepared for what is about to transpire.

One after the other, a group of select graduates rose to speak on stage, among whom was one, Huda Ayaz, a Pakistani American Muslim girl. Ayaz spoke inspirationally to her fellow graduates about their voice and the need for them to speak up for those in need and stand up to international wrongdoings, such as “the Uyghurs in China and the ethnic cleansing of Palestinians“. So, she said, and that’s it. No explanations necessary. Ethnic cleansing simply slipped into the speech, made its way to the front through the back door, mentioned nonchalantly, in a matter-of-fact kind of way.

Thus, a speech that was supposed to be celebratory and inspirational turned into a blow to the stomach for many Jewish families in attendance and their children, the graduates. Eli Meron was one of those graduates. When I spoke with him, he expressed shock and disbelief not only at the statement itself but also at the ease with which it was said: “why should I, as a Jewish graduate student, feel like I was targeted during an event which was supposed to be a moment of joy and pride for me?” he asks in frustration.

His father, Israeli-born Ovadia Meron, said this blatant accusation came at them “out of nowhere. Our area is a diverse one, with over 50% immigrant population, and we have never experienced any issue whatsoever in this regard, quite to the contrary. Some of my son’s best friends are of different religions, both Christian and Muslim, and we have always lived together in peace and harmony“.

When Ayaz got off the stage, even the applause – a natural component of any such event – were feeble and unenthusiastic. People were clearly bewildered. There is no doubt the severe accusation which was echoed on stage caught everyone by complete surprise.

Ethnic cleansing is not a mere expression. It is a grave and meaningful accusation, an indictment. It is one of those “fashionable” claims taking aim at Israel both on social media and by anti-Israel activists protesting in the streets. Their objective is clear: to spread propaganda and lies against the Jewish State and poison public opinion against it.

The UN defines ethnic cleansing as turning a region into “an ethnically homogenous one, through the use of force, intimidation and often the use of violence, meant to remove people who belong to a specific ethnic or religious group from a specific region.” This accusation against Israel is, of course, baseless and false, nothing short of a modern blood libel, or to use a gentler term: utter and malicious rubbish. Not only has there been no decrease in the number of Arabs/Palestinians in the region over the last few decades, but facts also show to the contrary! The number of Palestinians today is nine (!) times what it was in 1948, and even the Arab population of Jerusalem rose from 26% in 1967 to almost 40% of the city’s residents today. With the numbers going UP, so is the fictitious claim of ethnic cleansing going up in flames, but please don’t bother the haters with facts. That’s not what they are here to do.

What happened at the Wheatley School matters, not just on Long Island but throughout our academia and school systems. Ayaz made a conscious choice to use a charged expression and include it, almost as a by-the-way, in her graduation speech. She must act as the graduate that she is and take responsibility for her actions. This sentence, as short as it was, and especially because of the fact-like brevity of it, is the problem. Taking such a consequential claim and treating it as a given, no discussion required, true like the sun’s rising in the morning or afternoon traffic, is dangerous. Hey, didn’t I hear it or see it on social media? So, it must be accurate and therefore demands no explanation or apology …

Why does it trouble us so much? What’s so dangerous about it? Ethnic cleansing is a expression drenched in blood, meant to dehumanize and delegitimize. It is the kind that leaves an impression on those who hear it, and might believe the lie when it comes to Israel, if they don’t know enough or are not as familiar with reality or as savvy with the complexities of the conflict. And that impression is the fuel for horrible thoughts, a highway which may lead – as we’ve seen happening all too often recently – to gruesome acts of antisemitic violence against Jews. These ignorant statements pour oil on the antisemitic flame, which may quickly get out of hand. Incitement, even a quiet one, is a slippery slope into the dangerous unknown.

Therefore, we must treat this as a teachable moment, acknowledging the meaning of words uttered and their significance. If we are to survive as a justice-seeking life-loving society, it is incumbent upon us to deny entry to such lies. We must face them with strength and tenacity, loudly echoing the truth, as complicated and convoluted it may be.

No wonder reactions to Ayaz’s speech were halfhearted at best. Ayaz herself, and those speaking in her name, claimed they were “harassed” due to her speech, yet an online link of the entire event shows no sign of such “harassment.” Moreover, that very same video shows the Wheatley School’s administration’s denunciation of that part of Ayaz’s speech, which – according to the school – was not shared beforehand and was not approved. by them.

Facts aside, anti-Israel activists such as Linda Sarsour and the Council of American Islamic Relations (CAIR) jumped on the bandwagon quickly enough to hint that Ayaz was harassed because she’s a Muslim and wears a Hijab. Again, a nonsensical claim Ovadia Meron was upset about and quick to debunk: “Our region always enjoyed cordial relations between everyone, and here come outside agitators into our community and cause unnecessary friction and tension between us“. Eli and some of his friends, Jews and non-Jews alike, drafted a letter of support in the school’s administration and the steps taken to denounce the miserable statement Ayaz had made. This was an important step, coming from within, emanating from the students themselves.

To the community’s credit and that of the families involved, they all rose to the occasion and grasped its importance in real-time. They made their voices heard to anyone willing to listen, but not too many were willing to heed the Jewish cry. A local paper, The Island Now, published a story focusing solely on Ayaz’s claims of “harassment” and so did the local ABC News channel. At no point did anyone in the media paused to ask themselves, “Gee, I wonder what made those Jewish students so upset?” or “What was it about Ayaz’s sentence that brought about so much anger, frustration, and shock?”.

Apparently, Jewish tears leave no mark. Now it’s up to us to make sure Jewish pain is not in vain.