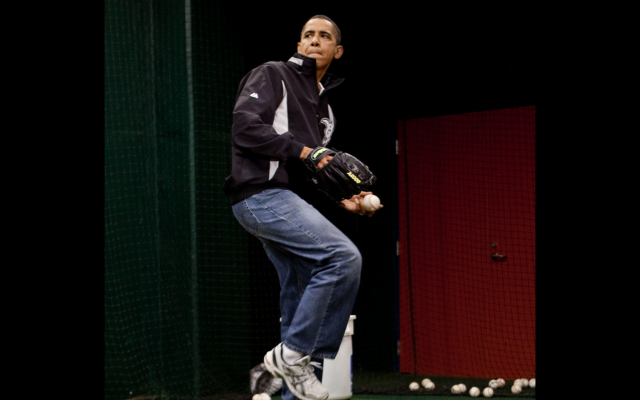 Sartorially human society has changed phenomenally over the years, fashion trends have come and gone, design changes have crept in accepted and promoted. There has been a near globalization of so called “western attire” all around the globe at-least in the urban centers. Historically most strangers were cause of great amusement in alien societies first and foremost because of their exotic sartorial appearances, slowly this exoticism has become endemic and restricted to rural areas, the urban “fashionscape” with alacrity so to say took up a garment so versatile with exceptionally plausible functionality that it found ready acceptability, without much opposition, though the occurrence of some culturally inspired opposition cannot be gainsaid. But nevertheless the versatility and utilitarian nature of this garment was the strongest arrow in its’s quiver, that made this garment one of the most popular around the world. This garment is now part of of the quintessentially American portraiture of themselves, this is jeans. 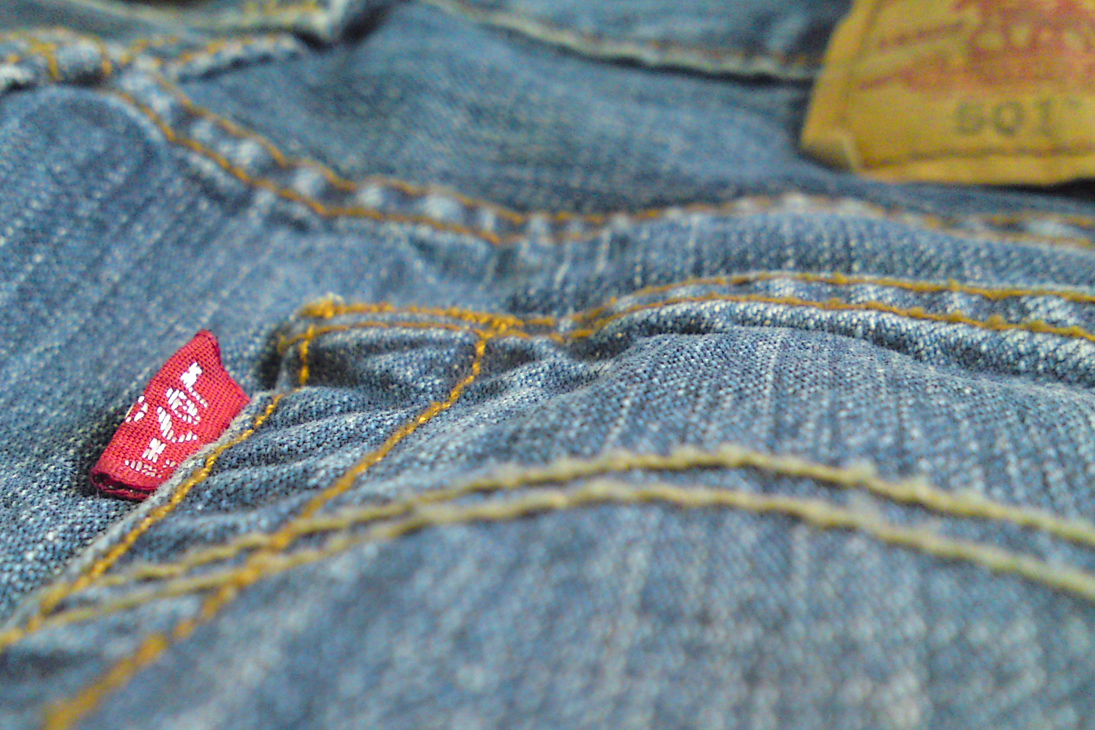 The back of a pair of Levi’s 501 jeans. Image Credits: Wikimedia Commons.

To this day, jeans are defined by a few essential features that haven’t changed since the early 1870s. The most important of these features is the rivet. The modern Jeans is a Jewish invention. Though Levi Strauss is typically credited with the “invention” of blue jeans, “Riveted” reveals the story of Jacob Davis, who added reinforcing copper rivets to the pants. But one thing they both had in common were that they were Jewish. 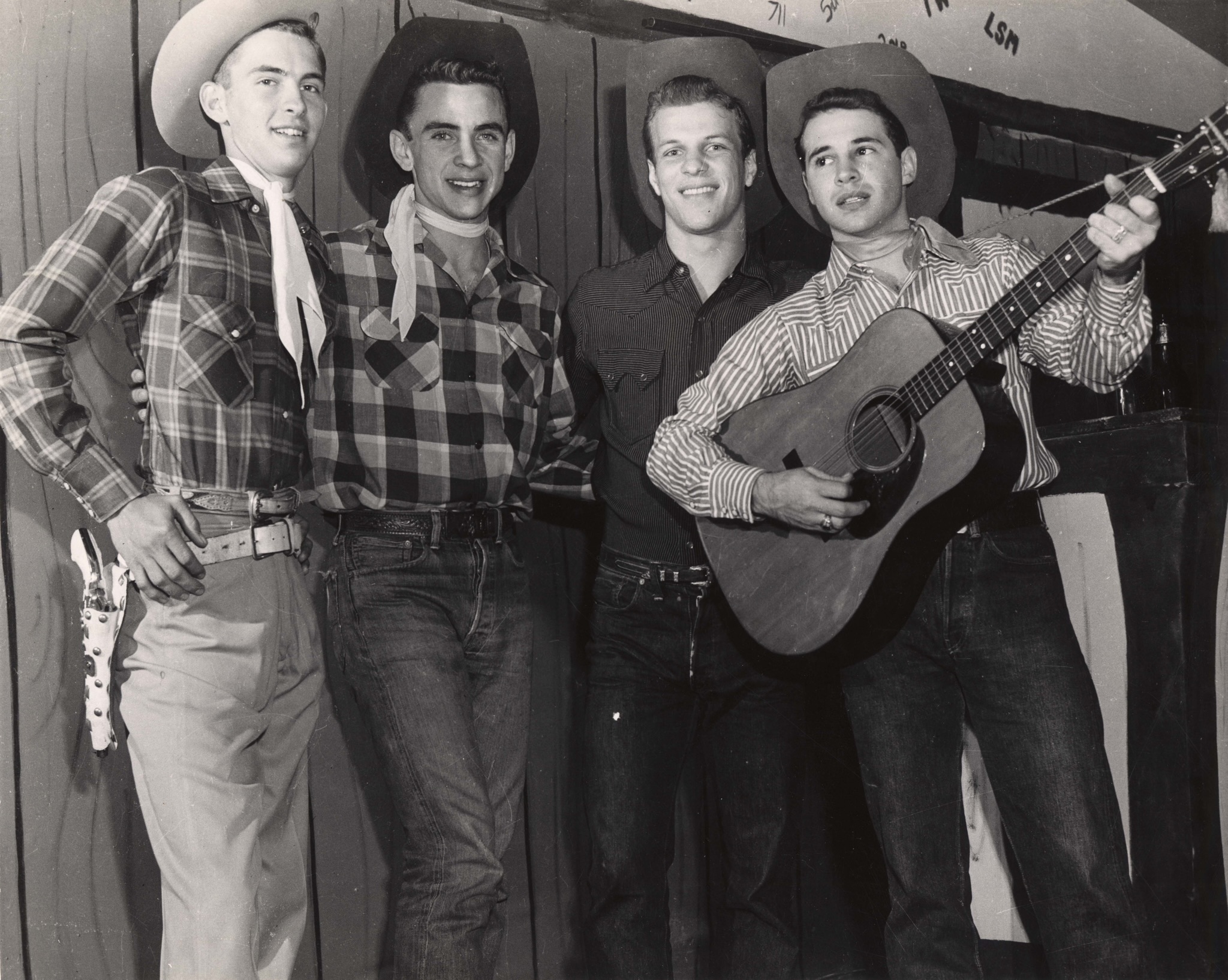 Four male students dressed as cowboys. The one on the right holds a guitar. Image Credits: Wikimedia Commons.

What has been the biggest cultural export from America to the rest of the world? Well many will say, jeans, with jeans the US maybe inadvertently or by purpose exported its liberal political values too which the readers will get to know about later in this article. Jeans have had both good and bad associations in the past, from abominable slavery in America, to the Cowboys of the American Old West. Most cowboys, especially early on, didn’t wear jeans, since Levi’s didn’t start selling blue jeans until 1873. Prior to that, cowboys and miners either wore riveted canvas pants or secondhand wool trousers. Jeans later on became an important political symbol may it be for the no war movement, movement for amicable race relations, or Cold War jeans were spotted in plenty. “It took Martin Luther King Jr.’s March on Washington to make [jeans] popular,” writes the art historian Caroline A. Jones. “It was here that civil rights activists were photographed wearing the poor sharecropper’s blue denim overalls to dramatize how little had been accomplished since Reconstruction.”

In April of 1962, the town of Huntsville, Alabama, protested segregation in department stores by replacing Easter Sunday with “Blue Jean Sunday.” When the Berlin Wall came down in 1989, the young people who dismantled the first bricks were famously photographed wearing blue jeans. In fact a Denim Revolution happened in Belarus, as per an article by David Schuck for Heddels. Democratic party supporters were protesting president Alexander Lukashenko after the disappearance of their leader, Dmitri Pavilchenko. Riot police soon confiscated their red and white party flags so protestor Nikita Sasim waved his denim shirt and announced that denim would serve as their flag instead. Party members began to wear denim on the 16th of every month as a sign of solidarity and waving indigo-colored flags to match Sasim’s shirt. The movement culminated in a 40,000 person protest in March of 2006 to dispute presidential election results. The protest was again broken up and ultimately the Denim Revolution was unsuccessful in overturning the election. However, the movement was one of the most cohesive oppositional political blocs in post-Soviet Belarus.

In India actors like Amitabh Bacchan sported jeans in many of their movies, challenging state and systemic oppression. May it be Belarus, East Germany or India, jeans did not reach alone. It carried with it American liberal values. Now the readers can make sense of the importance of just a garment in politics. Let’s now learn more about two Jewish geniuses who made this cultural political symbol what it is today. 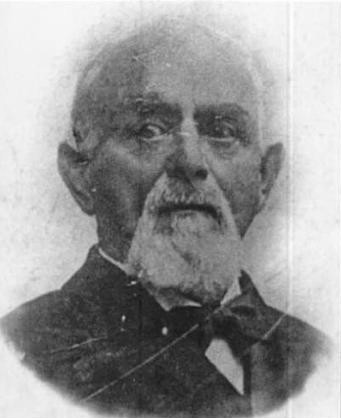 Jacob Davis was born into a Jewish family in Riga, then – part of the Russian Empire. His original name was Jakov Youfis he changed to sound better in the New World when he was emigrating to the United States in 1854. In the city of Reno in Nevada, USA a plaque marks the location of Jacob Davis’s tailor shop where in 1871, the riveted work pants we now call blue jeans, were invented it mentions and I quote “To strengthen his pants Davis hit on the idea of putting copper rivets at the stress points. Needing a business partner, Davis approached Levi Strauss. On May 20, 1873, the two businessmen received patent #139,121. They soon began to manufacture copper riveted work pants out of blue denim, and the American fashion icon Levi’s jeans was born. Marker placed by the Historical Resources Commission 2006.” 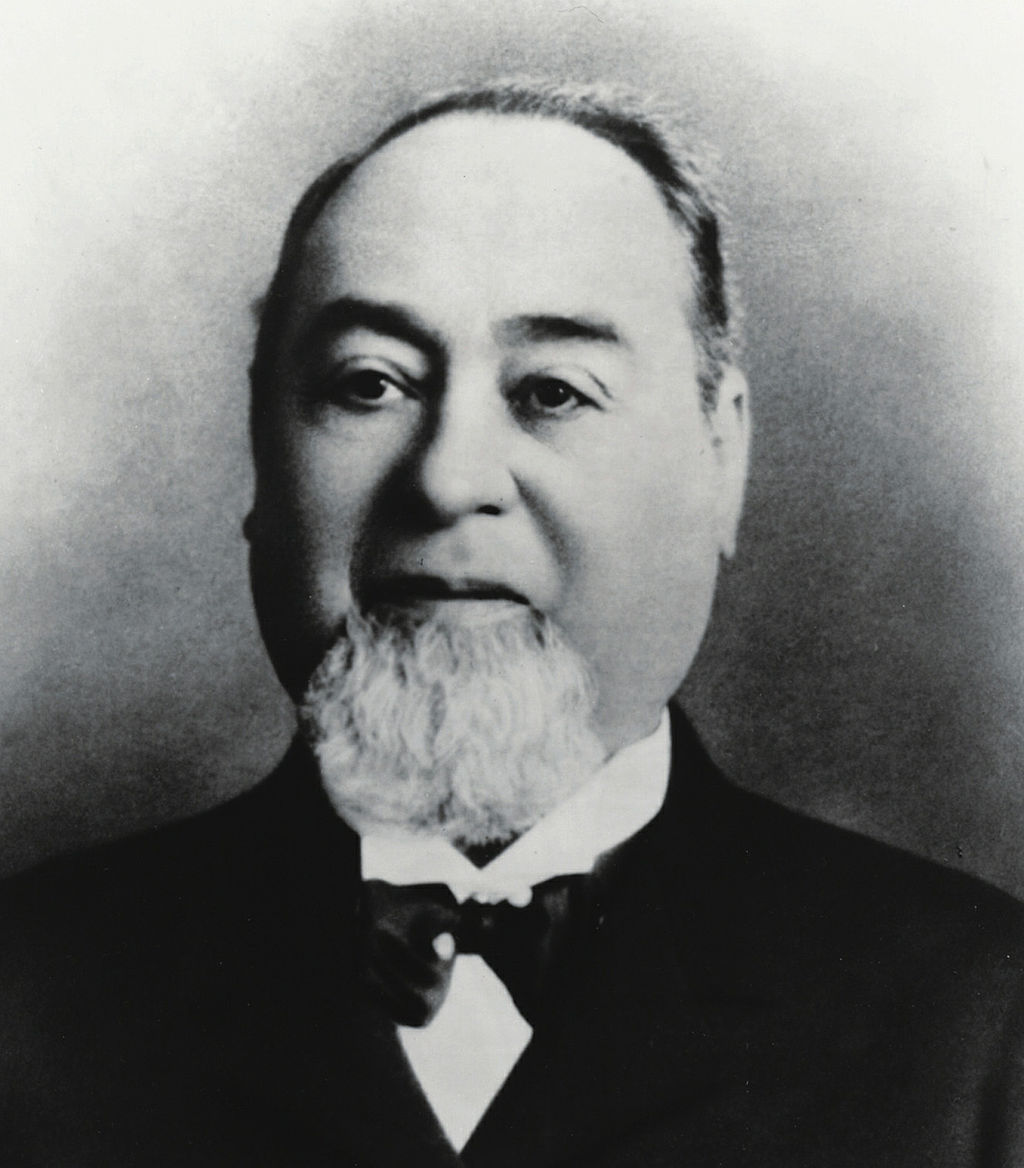 Levi Strauss was a proud Jew who became Jewish community leader later in his life, and a contributor to the Pacific Hebrew Orphan Asylum and Home, the Hebrew Board of Relief, San Francisco’s Temple Emanu-el Sisterhood, the University of California and other civic and cultural institutions. He was born on February 26, 1829 in Bavaria, Germany as a Jewish German Bavarian. Levi Strauss was born as Loeb Strauss. In 1847, Strauss, his mother and two sisters moved to New York, to join his brothers, Jonas and Louis Loeb, in their dry goods business. By 1850 he adopted the name “Levi Strauss” and in 1853, Strauss moved to San Francisco, California, during the gold mining boom. 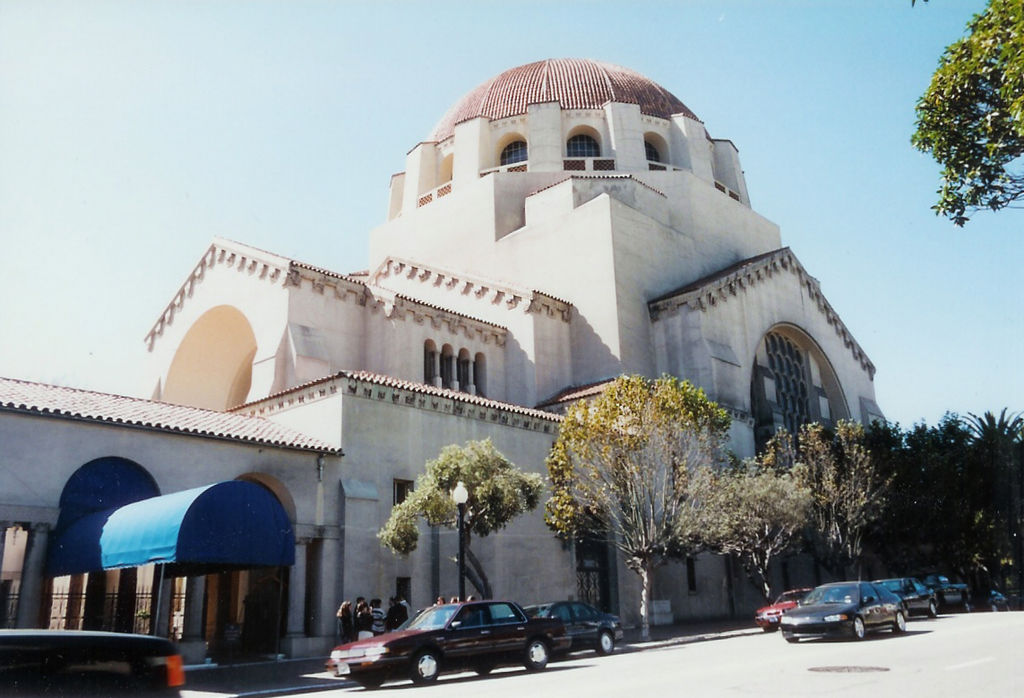 There he opened a dry goods wholesale business, Levi Strauss & Co., selling to small stores in California. Strauss observed that work clothes worn by gold prospectors and miners were not able to endure their torturous ordeal of working inside mine shafts, digging in the dirt and grime. Strauss developed the concept of and sold durable canvas pants. Initially, they were not very comfortable to wear but were very durable. Later, Strauss discovered denim. Strauss did not have any trouser material, but he did have some tent canvas which had come from De Nimes in France. He dyed this cloth in a dark blue colour and cut work trousers for the miners, and called the cloth “denim” from the French name “De Nimes”. On May 20, 1873, Strauss and Jacob Davis received US patent № 139121 for the riveting process to strengthen the pockets of denim work pants. This date is now considered the official birthday of “blue jeans.” And in 2003 “Levi Strauss & Co” celebrated the 130 anniversary of the invention of “blue jeans” by Levi Strauss and Jacob Davis.

A Triestian Jew and a Hungarian Jew 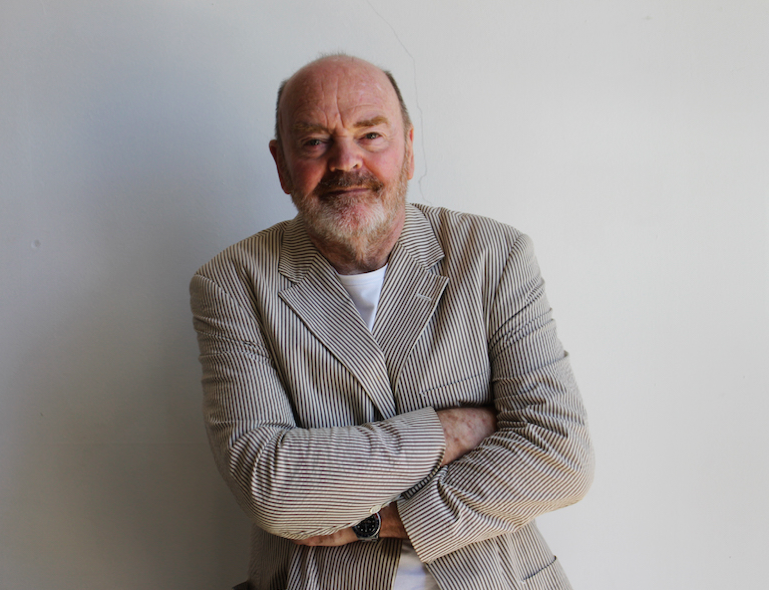 Like the creators of modern utilitarianism jeans the man who transformed, a utilitarian, and functional garment associated so to say with plebeians and not with gentry to a premium garment, was also a Jew. Born in an Ashkenazi Jewish family Adriano Goldshmied  wanted to be a competitive skier but ended up in the world of fashion, is the man who ushered in the concept of the Euro-flashy “designer” jean in Italy in 1970, is also the man behind the “premium” denim wave rising out of California since the turn of the last century. Adriano successfully established more than 50 brands in a different part of the world, he is the founder of major companies, including Replay, Diesel, Gap 1969, A Golde, and Goldsign though his main denim line is known as AG Denim. Calvin Klein and Gloria Vanderbilt were the first American designer jeans to hit the market in the mid-1970s. The Calvin Klein company was founded by Calvin Richard Klein (born November 19, 1942) an American fashion designer of Jewish Hungarian origin. Though Goldschmied transformed a common man’s garment to the garment of the gentry, he himself wears only Levi’s the old and the classic.

In India, the impact of import of jeans has been phenomenal, now there is rarely any college, or market where you won’t find youngsters sporting this garment invented and improved predominantly by Jews. It’s easy to wear, it’s comfortable to wear and it has that young feel to it, what other attributes will a garment need to be successful. Mazal Tov! To the great Jewish men who invented it and improved it, go get yourself a new pair of jeans now! Hanukkah is coming!