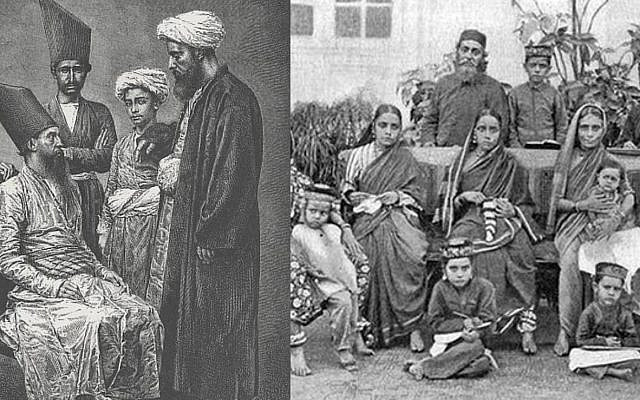 India is an ancient civilizational state not a state of Westphalian kind focusing on one language, ethnicity or culture. Our diversity is the paramount gem in our treasure of achievements hoarded as an evidence of India’s sui generis nature in the comity of nations. A distinction that India holds close to it’s heart, is the fact that we are one of the only countries, in the world that had no antisemitism rather a wide spread love for the Jews, who came to India in search of a home after persecution in their respective homelands. Not just the Jews but the Zoroastrians or the Parsis have found a home in India, my dear Israeli readers, remember that it was the Zoroastrian emperor Cyrus The Great of Persia who freed the Jews from Babylonian captivity, and sent them to the promised land of “Israel”. In this article you shall get to know the journey of arrival of these two friendly, but persecuted communities to India, their rise to prominence, and the similarities between them.

Dear readers, there are several similarities between these two communities, such as they are both ancient people, who were persecuted for sticking to their faith and way of life resulting in their expulsion or exodus from their homelands to welcoming India. Second both Jews and Parsis are monotheistic people in fact it is said, it was the Parsi Prophet Zoroaster, who founded the first monotheistic religion, “Zarathustri Mazdayasna” that evolved in modern Parsi or Zoroastrian faith, the faith of Emperor Cyrus the Great. Third they shared the same geography, the Middle East or West Asia. Fourth Both Jews and Parsis found a home in India without persecution or fear. They became thoroughly Indianized but retained their distinctive cultural traits and their faiths. Fifth Jews and Parsis went on to become the richest communities in India even though they are a small portion of the population. I hope you have heard about, Sassoons, Tatas, Godrejs, Wadias the big business houses of India? Jews and/or Parsis that’s one commonality between them. Sixth, India’s biggest military victory in the 1971 Indo-Pakistan war that led to the creation of Bangladesh had a humongous contribution by two heroes from these two communities. The operational head of the Indian army then was a Zoroastrian General Manekshaw and the biggest hero in the theatre of action was the Lion of Judah Lt. Gen. J. F. R. Jacob.

The major reason behind friendly ties between Jews and Parsis:

In the Old Testament of the Bible in the Book of Isaiah, it is written “ Cyrus is my anointed king. Take hold of his right hand. I give him the power to bring nations under his control. Cyrus, I am sending for you by name. I am doing it for the good of the family of Jacob. They are my servant. I am doing it for Israel.” Hashem says of Cyrus as per Isaiah “He is my shepherd and will accomplish all that I please” (Isaiah 44:28 ). King Cyrus actively assisted the Jews in rebuilding the temple in Jerusalem under Zerubbabel and Joshua the high priest. Cyrus restored the temple treasures to Jerusalem and allowed building expenses to be paid from the royal treasury (Ezra 1:4–11; 6:4–5). The Parsis or the Zoroastrians ruled a huge empire spreading from the Balkans to India and from Africa to Central Asia and were known for their general religious tolerance.

Exodus of Parsis from Iran to India:

As per Qissa-I-Sanjan a poem of 432, verse couplets, written by Zoroastrian High Priest (Dastur) Bahman Kay Qubad, in 1599 CE, following the invasion of Sassanid Iran by Arab Muslims under the Rashidun Caliphate in the 7th century AD, their ancestors moved to India. Zoroastrian ships started arriving in Sanjan and were received by Jadi Rana, a Hindu native ruler in Gujarat a state from which Prime Minister Narendra Modi of India hails. Rana offered the immigrants a full glass of milk to show that there was no space for them. The Zoroastrians responded by adding a spoon of sugar to the milk, demonstrating their intention was to blend in and subtly sweeten the figurative glass of milk without filling it to the brim. It is believed that following this incident, Jadi Rana granted the immigrants permission to stay on the condition that they learn Gujarati and wear the local attire Saree.

Exodus of Jews from Jerusalem and elsewhere to India:

Jewish history in Kerala, the south western state of India resembling Chile, also known by the popular phrase “God’s own country” , dates back to 68 AD. Many Jews are believed to have migrated here following the Roman attack of the tabernacle in Jerusalem. Muziris, the recently re-discovered port town, known variously as Kodungallur, Muchiri, Muyirikkode, Mahodayapuram, Cranganore and Shingly, was located on the shores of the Periyar river, it was here that Jews made the first contact with India.

Then came the Baghdadi Jews in multiple waves to India settling in the cosmopolitan cities of Bombay and Calcutta. Two such prominent Jewish families were the Sassoons of Bombay (Rothschilds of the East) and the Jacobs of Calcutta. The former family gave us the Indian philanthropist Sir David Sassoon who contributed significantly in the development of Indian city of Mumbai then Bombay, and the latter family gave India our great Military Hero Lt. Gen J. F. R Jacob, who played a prominent role in defeating Pakistan in 1971 Indo-Pakistan war which led to creation of Bangladesh.

Then came several thousand European Jews fleeing the Inquisition in Iberian peninsula and then the Nazi’s antisemitic policies and eventual Holocaust. The several thousand Jews who fled Nazi persecution to India in the 1930s, came in several waves starting with the German Jews. They were followed by others from Italy; Austria, East and Central Europe; North Africa, Afghanistan, Iraq, and Poland according to Dr. Kenneth Robins, an author on Indian Jews.

According to P M Jussary’s 1996 paper titled “A Jewish Settlement in Medieval Kerala”, the settlement was known in Europe as “Shingly, Chingilin, Cingalah and Zinglantz.” The paper cites a 14th century poem by Rabbi Nissim of Barcelona describing a descendant of Rabban.

“I travelled from Spain,

I had heard of the city of Shingly;

I longed to see an Israeli King,

Him I saw with my own eyes.”

Jews and Parsis in making of Indian Nationalist struggle for independence:

Despite their small population the Jews of India played an important role in furthering the cause of Indian independence and nationalism. In a 1917 letter to the newly appointed Secretary of State to India, Edwin Montagu, Bene Israeli Jews expressed their support for Indian self-rule. An extract from this letter reads:

“The scheme of reforms adopted by the INC (Indian National Congress) has been before the country for some time past. This scheme has our entire approval and hearty support. We urge the granting of these reforms at an early date….we cannot but sympathize with the just and legitimate aspirations of three hundred million of your fellow subjects, whose disabilities are mainly based on creed, color and race.”

A prominent Calcutta Jew, Maurice Rassby tried to guide Indian Jews when India was about to get independence from Britain:

“For us to become full-fledged Indian citizens will mean first and foremost complete allegiance to India as our mother country. We are Indians as much as we are Jews. Palestine will have to be our spiritual home just as Mecca is for the Muslims….responsible to one power alone – the government of India.”

Jews like Sir William Rothenstein helped in the independence of India and Dr. Abraham Barak Salem is even known as the Jewish Gandhi who did non-violent protests against discrimination by white Jews against black Jews in Kochi (Cochin) India.

Like the Jews, the Parsis contributed significantly and disproportionately to their population in giving leadership to India’s struggle for Independence. The first person to write about the drain of wealth from India to Britain during colonial rule was a Zoroastrian named Dadabhai Naoroji who is known as the grand old man of India, and considered to be the first major Indian Nationalist leader who became a member of the British parliament and raised the issues troubling Indians, several other Parsis played an important part in India’s struggle for independence like Madam Bhikhaji Cama, Jamsetjee Jejeebhoy and Jeji Petit.

Jews and Parsis have made India their home, and as a Hindu  this author feels proud of the fact that his ancestors welcomed them with open arms. My country protected them and let them lead the Indian struggle for independence and later gave them a conducive environment to work excel and achieve great successes in their lives. May God give strength to us Indians to maintain this friendship and love for each other and may India with Israel March to give the world a new leadership together as friends, as we have been since ancient times.