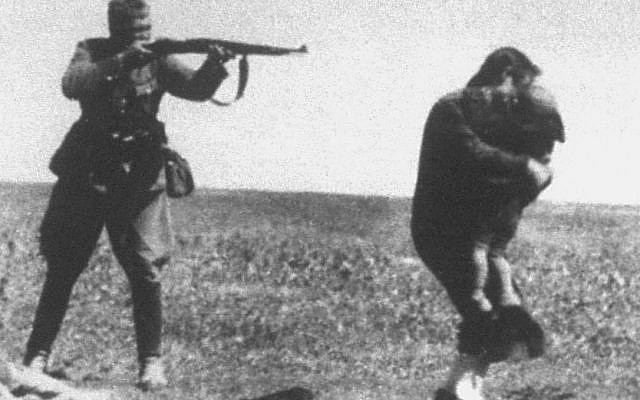 The Ivanhorod Einsatzgruppen photograph is an image of the Holocaust, showing a soldier aiming a rifle at a woman who is trying to shield a child with her body. It depicts the murder of Jews by an Einsatzgruppen death squad near Ivanhorod, Ukraine, in 1942. (Public Domain)

What Will End The Anti-Semitic Statements Coming From America?

Do We All Need To See Pictures Such As The One Above To Take A Strong Stand?

While The Holocaust Was Going Full Steam Ahead, The World Played Deaf And Dumb!

World Jewry — Are We Going To Let History Repeat Itself?

The photograph was mailed, intercepted by the Polish resistance in Warsaw, and kept by Jerzy Tomaszewski. In the 1960s, it was alleged that the image was a Communist forgery, but that claim was debunked. Since then, the photograph has been frequently used in books, museums, and exhibitions relating to the Holocaust. Photograph historian Janina Struk describes it as “a symbol of the barbarity of the Nazi regime and their industrial-scale murder of 6 million European Jews.”[1]

During the Holocaust, more than a million Jews were murdered in Ukraine. Most of them were shot in mass executions by Einsatzgruppen (death squads) and Ukrainian collaborators. In 1942, a mass shooting by Einsatzgruppen south of the town killed an unknown number of victims. Part of the massacre is depicted in this photograph. After the war, the execution site was used as a field of a collective farm.[4]

This is a cropped photo from a larger picture showing more Jewish victims who were killed by the Nazis. By blowing up that photo to concentrate on this section of the photo, it provides shocking proof of how cruel and inhumane the Jews were treated by the Nazis during the duration of the Holocaust.

The German soldier on the left is pointing his rifle directly at the head of the Jewish woman holding a child, which is most probably her child. This helpless woman is trying to protect that child from the German soldier. If you look closely at the woman’s right leg, it appears to be lifted as if she is trying to flee while carrying that child with her.

Looking at the ground near the German soldier’s right foot is a partial image of what appears to be the body of a woman who most likely had just been shot. Therefore, it is possible that this picture was taken at the very moment the woman was shot holding her child to run away.

The Polish resistance infiltrated the postal office in Warsaw in order to intercept sensitive correspondence, which they sent to the Polish government-in-exile in London.[5]

Poles and Jews were forbidden to own cameras, but the Polish resistance established underground workshops for developing clandestine photographs of Nazi atrocities.[6]:78–79

During the Soweto Riots of 1976 in South Africa, a very famous picture was broadcast around the world of a dying Hector Pieterson being carried away by Mbuyisa Makhubo and accompanied by his sister, Antoinette Sithole. That photograph was seen around the world and became the symbol of the Soweto uprising. The photographer who took that photo also spoke-

Sam Nzima Speaks About That Photograph

In an interview I recently saw, photographer Nzima spoke about the difficulty he had with the South African authorities. When anyone would leave the scene of a riot or crime, especially those involving the government, the authorities demanded that all cameras be emptied of any film. In those days, the film in the camera needed to be taken to a lab to be developed. Any exposure to light before developing ruined the film. So before his camera could be checked by the authorities Nzima removed the film from his camera and hid it in his sock.

I was unable to show that picture for this Blog due to copyright restrictions but if you will search for it on the Internet, I am confident you will be able to locate it by using key words Hector Pieterson or Sam Nzima.