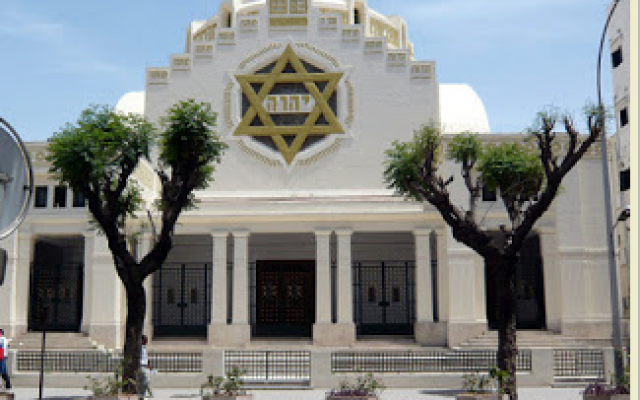 The Great Synagogue, Tunis, damaged in the 1967 riots

“They had everything in their hands; fire, axes, knives, swords… They were banging, trying to break the doors and they set the curtains on fire.” Doris Keren-Gill, a Jew from Libya, well remembers the dark days of June 1967 when rioters destroyed her home and nearby synagogue. Doris escaped with her life. Today not a single Jew is left in Libya.

While the media focus on the events leading to Israel’s lightening Six Day War victory, the impact on the few thousand Jews remaining in Arab countries is forgotten. In 1967 all these communities were shadows of their former selves, 90 percent of their Jews having already fled: some 76,000 Jews remained out of a 1948 population of 900,000. Almost all had been deprived of civil rights but could still quietly pursue their education, run businesses and enjoy a social life. But the vindictive Arab reaction to Israel’s victory changed all that.

In Syria and Iraq Jews were kept as hostages; Jews poured out of Sudan, Egypt, Morocco and Tunisia. Jews in Libya, taunted by enraged mobs, and Aden, where Jewish property was set on fire, were evacuated for their own safety. In almost all Arab countries there were demonstrations and anti-Jewish riots. Some governments actively persecuted their Jews as if they were Israelis.

Already Jews in Iraq had to carry yellow identity cards and were unable to leave. But Arab rage led to property seizures, beatings and arrests. Jews were sacked, telephones were cut off. On 27 January 1969, nine Jewish “spies” were executed and their bodies strung up in Baghdad’s Liberation Square. A million Iraqis came to celebrate. The arrests continued until 1972: some 50 Jews disappeared. Not permitted to leave, almost 2,000 Jews escaped Iraq with the help of Kurdish smugglers, leaving their homes and possessions behind.

Jewish migration from Lebanon, which accelerated in 1964, reached epidemic levels after the 1967 war due to fears of impending riots. The mass exodus was followed by the abduction and murder of individual Jews.

Some of the fiercest riots broke out in Tunisia on 5 June 1967. The Great Synagogue in Tunis was set on fire. Panicking Jews abandoned their homes. Within five years, only about 7,000 remained.

In Morocco, a massive security deployment prevented loss of life during mass demonstrations. When the propaganda of an Arab victory turned out to be false, two Jews were murdered. An economic boycott against Jewish businesses was declared. Some 10,000 Jews left, mostly to France and North America.

In Syria, curfews were imposed. Jews were housebound hostages, deprived of telephones and radios. Some 2,300 Jews were smuggled into Israel from Syria, but it would be another 25 years before the rest would be allowed to emigrate.

In the Libyan pogroms, more than 100 shops were destroyed and 18 Jews were killed. The Libyan exodus left fewer than 100 Jews behind. In 1969, Colonel Qaddafi ordered all Jewish property confiscated and debts to Jews cancelled.

In Egypt, the authorities arrested 400 Jewish males up to the age of 60 as ‘Israeli PoWs’. They were interned for up to three years. The prisoners were abused and fed dirty bread containing cigarette butts and nails. The Rabbi of Alexandria was tied to the prison bars and beaten senseless.

The Six Day War thus marked the irrevocable and silent demise, within a few years, of Jewish communities which had pre-dated Islam by 1,000 years. Although they played no part in Israel’s victory and despite representations by Jewish groups and foreign governments, Jews in Arab countries paid a terrible price. Pursuing revenge, Arab regimes committed serious human rights abuses. They have never been held to account.