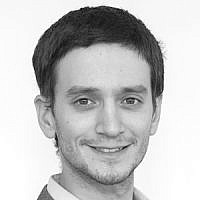 The Blogs
Ariel Paz-Sawicki
Apply for a Blog
Advertisement
Please note that the posts on The Blogs are contributed by third parties. The opinions, facts and any media content in them are presented solely by the authors, and neither The Times of Israel nor its partners assume any responsibility for them. Please contact us in case of abuse. In case of abuse,
Report this post.

The U.S. decision to pull out of Syria is a disaster for The Kurds and for Syria. It’s also bad for the U.S. and for Israel. Before this happens, we must raise our voices and call upon the Trump administration to cancel this decision before it is too late.

Northeastern Syria, known by the Kurds as Rojava, is host to the only ethnically inclusive and pro-democracy entity in all Syria, and houses over 3 million people. This entity has been named the Democratic Federation of Northern Syria (DFNS) since December 2016, during which time it also adopted the “social contract,” a constitution which enshrines the rights of minorities and women. In the DFNS, every elected office has two co-chairs, and these must be of different gender and ethnicity. The DFNS has abolished the death penalty. Unlike in western democracies, the DFNS allows issues of gender and family violence to be judged solely by women.

The DFNS is not without its critics. A Human Rights Watch report in 2014 accuses the ruling party, the PYD, of arbitrary arrests and forced conscription. Mohammad (false name), one of the dozens of Kurdish refugees I interviewed over the summer in Europe, was opposed to the DFNS. Mohammad labeled it “the least terrible option” in the area (not that that’s saying much), but still an autocracy.

The vast majority of Kurds I spoke with, however, thought differently. They were proud of what’s happening in Rojava. The DFNS was the only group they believed was working for them, though its limited resources made substantial provision of services difficult. most of the Kurdish refugees found themselves in Europe after Turkish aggression in Afrin forced them to flee. In what can only be described as grotesque irony, Turkey received billions of Euros from the EU to reduce the flow of refugees to Europe, though the Afrin operation created as many as 170,000 new refugees.

As someone who has been researching the Syrian conflict for a decade, I feel that we all must advocate for the DFNS project. Though few people are listening to them, the DFNS are the people offering Syria the closest thing resembling an actual solution to the civil war. They are not advocating for an independent Kurdish state. Rather, they acknowledge the ethnic diversity of the country, and suggest a different framework: a decentralized state, in which certain specific aspects are managed centrally (military, foreign relations and the financial system), while other aspects are managed locally. If the Islamists in Idlib want to teach Quran, that is their right; if the Kurds in Qamishli want to teach feminist critiques of history – that is their right as well. Decisions will be made on the municipal or regional level. Saleh Muslim, a Kurdish PYD co-chair, even tried in 2014 to get Turkey on board stressing that the Syrian state will remain intact. He failed dismally; Turkey eventually had him arrested.

At this point, the future of Rojava can go on two basic paths. The first is the path of Afrin: in an August 2017 agreement between The U.S. and Russia, the two superpowers agreed to mark the Euphrates river as the limit of each other’s sphere of influence. Afrin is located on the Western, Russian side of the Euphrates. Within months, the Russians had sold out the Kurds to Turkey, which initiated the aforementioned “Operation Olive Branch” in late 2017. The DFNS ‘Afrin Canton’ (or ‘Afrin Region’) was erased; hundreds of thousands became refugees. An unknown number were killed. Turkey proceeded to settle the Kurdish area with Arabs, and loot Kurdish homes.

The second path is that of the Kurdish Regional Government, or KRG, in Iraq. The Iraqi KRG was not created on purpose: the U.S. imposed a no-fly zone over parts of Northern Iraq following the First Gulf War in the early 90s. The U.S. intention was humanitarian: prevent continued chemical bombardment of the Kurds by Saddam Hussein. A decade later, the Kurds – who turned the no-fly-zone into a de facto autonomous state, with their own army (the “Peshmerga”) keeping the Iraqi army out. They soon became America’s first and best local allies in the Second Gulf War, remembering their debt to the Americans for imposing the no-fly-zone. Today, the KRG (often named simply “Kurdistan”) is the safest place in Iraq; my professors even suggested I spend my summer there interviewing Kurds.

As an Israeli-American liberal Jew, there are few causes I wholeheartedly sympathize with more than that of the Syrian Kurds. As a Jew, I support the right of the Kurdish people to self-determination, to finally achieve the independence they had been seeking for a century. As a liberal, I am deeply moved by the attempt to implement ideals of feminism, ethnic inclusion and ecological sustainability in Rojava. As an Israeli, I am rooting for our natural allies – the Kurds – to rise into freedom. And as an American, I demand that our alliances – and our word – be worth the paper they are written on.